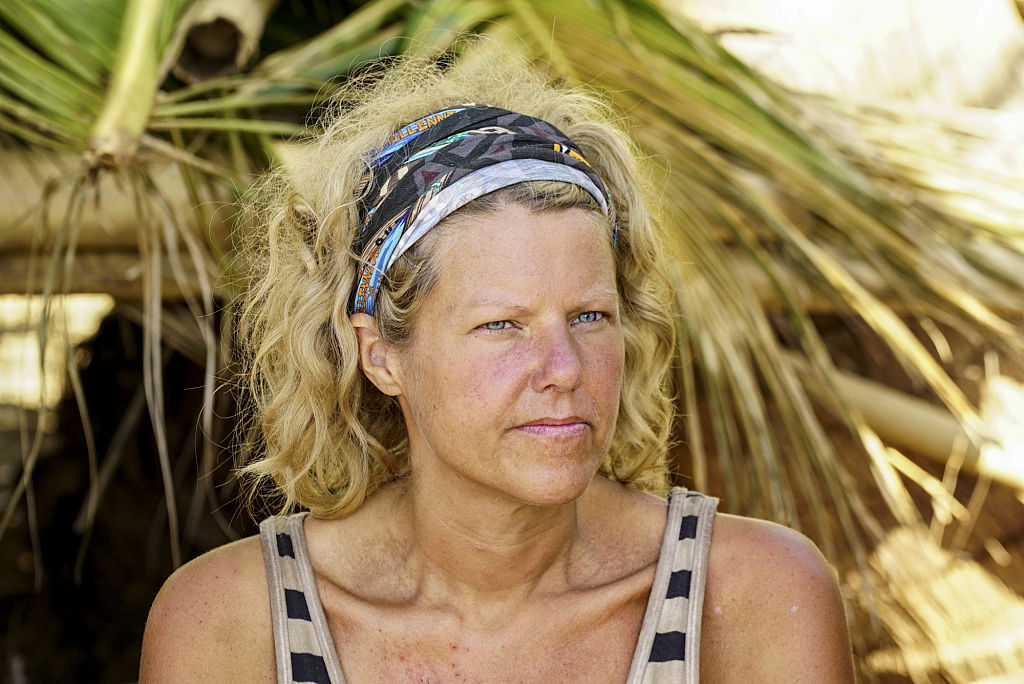 Surivor alum Sunday Burquest has died after her battles with cancer (Picture: Monty Brinton/CBS/ Getty Images)Survivor alum Sunday Burquest has died aged 50, less than a year after revealing her battle with esophageal and ovarian cancer.
The Survivor: Millennials Vs. Gen X contender died on Sunday (April 18) and the news was revealed by her daughter Kennedy in a touching tribute.
The 20-year-old wrote: ‘To my unbelievably beautiful mama, Thank you. Thank you for fighting as hard as you did for as long as you did.’
She continued alongside snaps of the duo over the years: ‘Thank you for being a best friend, a role model, a sister, and my mother all in one. Thank you for raising me to love Jesus, and show that love to others. That’s something you did so well.’
Kennedy went on: ‘It breaks my heart to know you will never get to see me on my wedding day, or be there when I have my first kid. But I know you’re watching over me. Although it hurts me so bad to watch you go, I’m so happy you are happy again.
‘I’m happy you get to be with Jesus and see your dad. I’m happy you aren’t in pain anymore. I’m happy I got to have these past few months with you. I loved taking care of you. You’ll always be my favorite patient.’

The reality TV star first battled breast cancer in 2012 and underwent multiple surgeries, as well as chemotherapy and radiation (Picture: Sunday Burquest/Instagram)She concluded: ‘I love you to heaven and back a million times. I know one day we will meet again. Until then, I’ll spend every minute missing you, and trying to make you proud. Rest easy mom, I’ll see you soon.’
Sunday’s fellow Survivor: Millennials Vs. Gen X contestant Adam Klein sent condolences in a comment which read: ‘You are your mom in so many ways, Kennedy. She always saw you that way. When I look at you I see her, too. I will get to see my friend Sunday as I watch you on your journey, as the grit girl you know that you are.
‘Your special connection with your mom will always carry you through the tough decisions and important moments in your life. What would she do” is a thought I often have, how would she feel (you’ll know), and you know your mom better than anyone. She will guide you, until you meet again.’
Survivor’s Rob Cesternino wrote: ‘I am so sad today to learn about the passing of Sunday Burquest. She got dealt a number of terrible blows from life but she remained the most positive person you could ever know. I will never forget how brave she was in her fight.’
Peih-Gee Law – who starred on Survivor: China and Survivor: Cambodia – stated: ‘Sunday was one of the only people in the world that could ‘mom’ me in a way that put me at peace. She was a vibrant part of our Survivor family. I loved having game nights with her. You will truly be missed.’

I am so sad today to learn about the passing of Sunday Burquest. She got dealt a number of terrible blows from life but she remained the most positive person you could ever know. I will never forget how brave she was in her fight â¤ï¸ https://t.co/VlK9agr2kV— Rob Cesternino ð (@robcesternino) April 18, 2021

Big Brother’s Evel Dick tweeted: ‘Sunday and I were polar opposites in so many ways, but we got along anyhow. Sunday did my show a few times and I really liked her. I am so sad to hear of her death & my heart goes out to her family. RIP Sunday.’
The reality TV star first battled breast cancer in 2012 and underwent multiple surgeries, as well as chemotherapy and radiation.
More: US TV news

Sunday was declared cancer-free four years later in time to compete on Survivor in 2016 and she later wrote a book in 2018 about her journey titled, Grit Girl: Power to Survive Inspired by Grace.
Sunday is survived by her husband, four children, and two daughters-in-law.
Got A Showbiz Story?
If you’ve got a celebrity story, video or pictures get in touch with the Metro.co.uk entertainment team by emailing us celebtips@metro.co.uk, calling 020 3615 2145 or by visiting our Submit Stuff page – we’d love to hear from you.

MORE : Taylor Swift ‘stalker’ arrested for attempting to break into her NYC apartment