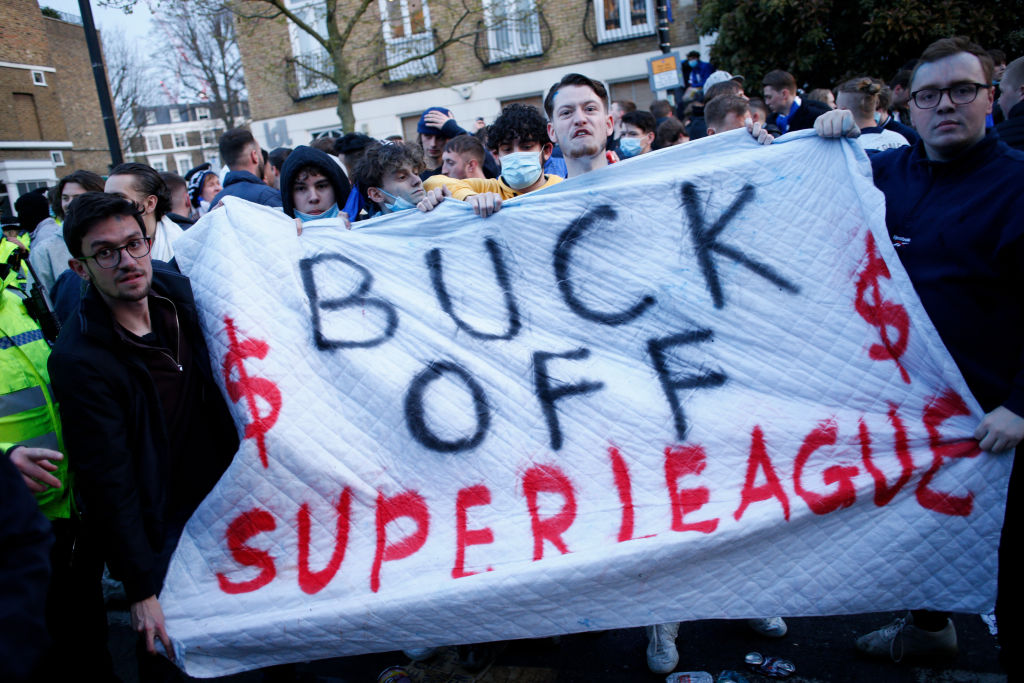 The controversial breakaway competition has been defeated… for now (Picture: Getty)The European Super League has officially hit pause on their controversial plans after the Premier League’s so-called ‘big six’ all withdrew from the competition following a monumental backlash.
Just 48 hours after its inception, the breakaway Super League has already been defeated after fans, players, governing bodies and politicians united in condemnation of the proposals.
The Premier League’s contingent of renegade clubs have all released statements confirming their withdrawal, with Chelsea the last to announce their decision shortly before 1am on Wednesday morning.

Supporters outside Stamford Bridge vented their fury on Tuesday evening (Picture: Getty)Barcelona and Atletico Madrid are also believed to be ready to back away from the Super League, along with Inter and AC Milan, leaving just Real Madrid and Juventus as the last two clubs still standing.
Those six clubs called an emergency meeting on Tuesday evening following the mass withdrawal of Premier League sides and, despite the clear rejection of the Super League from the public, say they intend to continue to pursue their vision but have suspended its current iteration in order to ‘reshape the project’.
The statement reads: ‘The European Super League is convinced that the current status quo of European football needs to change.
‘We are proposing a new European competition because the existing system does not work.
More: Champions League

‘Our proposal is aimed at allowing the sport to evolve while generating resources and stability for the full football pyramid, including helping to overcome the financial difficulties experienced by the entire football community as a result of the pandemic.
‘It would also provide materially enhanced solidarity payments to all football stakeholders.

Real Madrid chief Florentino Perez has not given up on a Super League just yet (Picture: Getty)‘Despite the announced departure of the English clubs, forced to take such decisions due to the pressure put on them, we are convinced our proposal is fully aligned with European law and regulations as was demonstrated today by a court decision to protect the Super League from third-party actions.
‘Given the current circumstances, we shall reconsider the most appropriate steps to reshape the project, always having in mind our goals of offering fans the best experience possible while enhancing solidarity payments for the entire football community.’
Any clubs who continue to be affiliated with the Super League will face the prospect of sanctions from Uefa and their own national football associations, including bans from domestic and European competitions.