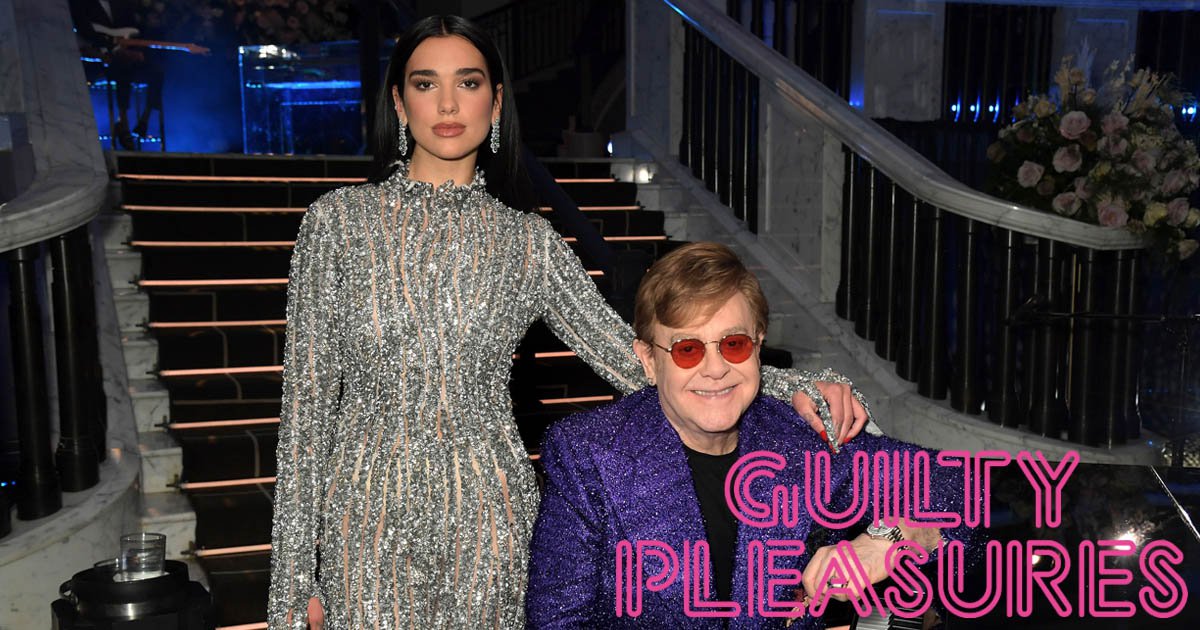 Dua Lipa performed at Sir Elton John’s Oscars after-party (Picture: Getty)Dua Lipa proved everything she touches turns to gold after she helped Sir Elton John raise more than £2million for his Aids Foundation.
With the Rocket Man’s Oscars after-party taking place online for the first time, the special saw Dua, 25, shimmer in a duet with Elton on Bennie And The Jets before performing a selection of her own tracks.
Elton was joined by husband David Furnish for the hour-long, virtual pre-show at the Rosewood hotel in London, which featured appearances from Lady Gaga, Cynthia Erivo, Elizabeth Hurley and David Walliams.
They were joined by the cast of Channel 4 drama It’s A Sin, which explored the HIV/Aids crisis in ’80s London, including Olly Alexander, Omari Douglas and Neil Patrick Harris — who acted as host.
Sir Elton, 74, said: ‘We haven’t missed a year yet and we certainly weren’t going to miss our 29th annual Oscar party to benefit my foundation — even if it meant going virtual.
‘It was so much fun to perform with the gorgeous Dua Lipa and open up our party to supporters all over the world.
‘I’m so grateful to Neil for hosting, everyone who attended and all my friends who participated so we could continue this legendary event to raise vital funds to end the Aids epidemic.’
The pre-show was available to the public and hosted in four time zones, each accommodating 100,000 viewers.
More Guilty Pleasures…
A wed carpet debut for Riz and Fatima
He missed out on his first Oscar but Riz Ahmed got to make his red carpet debut as a married man.
The newlywed Londoner was joined by his wife, American novelist Fatima Farheen Mirza, in a Mr & Mrs showing at Union Station in Los Angeles.
Fatima made sure her leading man looked his sharpest, titivating the Sound Of Metal actor’s suit for the cameras, while he helped arrange her hair, telling photographers: ‘I’m the official groomer!’

Riz Ahmed hit the red carpet with his wife Fatima (Picture: Getty)Riz, 38, who lost the best actor Oscar to Sir Anthony Hopkins, has previously revealed the benefits of their no-frills lockdown wedding.
It was held in a garden, where he described the ceremony as ‘super-intimate and socially distanced’. He added: ‘There was hardly anyone there. We did it in a backyard. The nicest thing about it was you didn’t have 500 aunties hanging around you, pinching your cheeks!’
Bor-out! Sacha’s early exit
One of the benefits of Zooming into the Oscars as a nominee is that you don’t have to sit around and cheer on the winners once you have lost.
Just ask Sacha Baron Cohen and his missus Isla Fisher, who were clocked slinking out of a special screening in their home city of Sydney before the ceremony wrapped.
Cohen, 49, had been in the running for double glory. He was nominated as best supporting actor for The Trial Of The Chicago 7, while his controversial Borat Subsequent Moviefilm was up for best adapted screenplay.
But the 49-year-old Brit missed out on both, and he and the 45-year-old Confessions Of A Shopaholic star made a hasty exit.
They donned face masks as they were whisked away in a chauffeur-driven car.
Cutaway glamour as stars come out of lockgown
Carey Mulligan dressed like a gold statue… she just didn’t take one home.
The Promising Young Woman star looked ab fab in a shimmering golden Valentino gown with her tummy on show as she turned up at the Oscars as hot favourite for her first Academy Award.

Carey Mulligan wore a gold dress (Picture: Getty)However, despite winning best female lead at the Independent Spirit Awards only days earlier, Carey, 35, missed out on the Oscar.
The cutaway look was clearly on trend at the ceremony. Zendaya, 24, also revealed a washboard stomach in a yellow gown from the same designer.
And Vanessa Kirby, 33, had tum thing to flash with her cut-out pink gown from Gucci.:
Em drops a clanger over Bell…
Emerald Fennell hinted she might name her baby after her old Saved By The Bell crush after name-checking him in her Oscars speech.
The Crown star revealed she was expecting her second child as she picked up her best original screenplay gong for Promising Young Woman.

Emerald Fennell debuted her bump at the Oscars (Picture: Getty)Later, asked about names for her bump, 35-year-old Emerald said: ‘If Zack Morris doesn’t mind this situation, I think we should really just give it a go.’
After learning that her comment left Zack, played by Mark-Paul Gosselaar, trending, she added: ‘No, oh God! How embarrassing!’
Mr Brad Pitt… where were Yuh?
At first glance, it seemed like an outrageous flirt, but Oscar-winner Yuh-jung Youn could have been taking a pop at Brad Pitt during another scene-stealing acceptance speech.
The 73-year-old became the first Korean winner of an Academy Award when she scooped best supporting actress for Minari.
Youn — who blasted Brits as ‘very snobbish’ when she won a Bafta earlier this month — had the audience thinking she was complimenting Brad on how hot he looked when he presented her with her Oscar.
But her comment when she said: ‘Mr Brad Pitt, finally! Nice to meet you. Where were you when we were filming, in person?’ might have been about something else.

Yuh-Jung Youn and Brad Pitt posed together for a photo (PIcture: AP)Pitt, who looked quite teary at her speech, was a producer on Minari.
Movie commentators now believe she was teasing the 57-year-old about being a no-show on set.
She also thanked her two sons, ‘who make me go out and work’.
Life on the fringe… for producer Margot
She bangs! Margot Robbie stole the red carpet thunder as the internet went nuts for her latest style transformation.
The Australian screen star wasn’t even nominated in the acting categories but her new fringe for the summer, worn with a loose ponytail, won rave reviews from style critics.
Margot, whose floral print gown was from Chanel, credited her personal hairstylist Bryce Scarlett for her transformation.

Margot Robbie wore a floral Chanel gown (Picture: Getty)Nothing was to cramp her style as the 30-year-old left her British hubby Tom Ackerley at home.
Margot was in the cheering squad for her film Promising Young Woman, where she was a producer.
I’ll always Fight For You, vows HER
American singer HER vowed to always ‘fight for my people’ after finding herself an Oscar winner.
The Best Part singer, 23, bagged best original song for Fight For You, from Judas And The Black Messiah.
More: The Oscars

‘I believe we have an opportunity and a responsibility to tell the truth and write history the way that it was and the way it connects us to today,’ said HER. ‘Knowledge is power, music is power and as long as I’m standing I will always fight for us and fight for my people.’
Got a showbiz story?
If you’ve got a celebrity story, video or pictures get in touch with the Metro.co.uk entertainment team by emailing us celebtips@metro.co.uk, calling 020 3615 2145 or by visiting our Submit Stuff page – we’d love to hear from you.