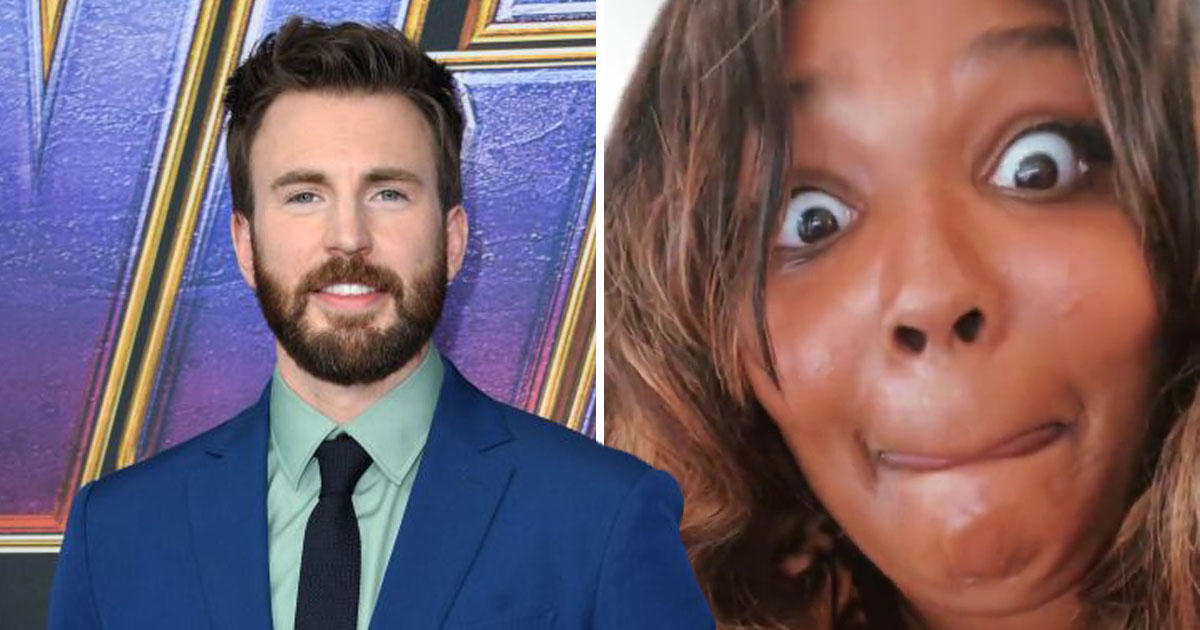 Lizzo and Chris are talking…and we love it (Picture: Tik Tok/Getty Images)After telling fans not to drink and DM, Lizzo has revealed more messages sent between the singer and Avengers star Chris Evans.
Recently the Truth Hurts singer showed us even chart-toppers shoot their shot on social media after she slid into the messages of the Captain America actor – with Chris himself responding.
A couple of legends right there.
But now Lizzo has revealed their conversation didn’t stop there, with the pair going on to have a little back and forth and honestly we want this romance to happen more than Lizzo, we reckon.
After being asked by a fan for an update on how things were going with Chris (we are a nosy bunch, aren’t we?) Lizzo challenged followers to test their speedy screenshot skills as she flashed the messages ever so quickly on her TikTok.
‘So, let’s see what your pause game is like motherf**kers,’ Lizzo said before a shot of their conversation appeared for a hint of a second.
Luckily, the pause game is pretty dang strong with this lot.
Responding to Chris’ sweet reply, Lizzo wrote alongside a series of emoji: ‘Well.. they say u miss 100% of the shots you never take (and even tho I unsent it like a dork) I’m glad u know I exist now.’
For a second though it seemed Lizzo had forgot she was a chart-topping, international, A-list artist, with Chris most certainly knowing who she is. We hazard a guess he’s pumped Good As Hell a few times.

Lizzo wanted to shoot her shot…and she did (Picture: Getty)

See also  Everything We Know So Far About The Much Hyped Anime!

Chris was clearly keen for a chat (Picture: ACE Universe)He wrote: ‘Of course I do! I’m a fan! Keep up the great work!! xxx.’
Sadly while we could get a handle on the first few messages shared between the two, Lizzo’s head was blocking their most recent interaction with internet sleuths figuring out Lizzo said something about ‘doin a shot’ and Chris mentioned ‘buying’ something.
We’re so invested in this it hurts.
The singer had recently posted her initial message to Chris on TikTok, writing: ‘Don’t drink and DM, kids….for legal porpoises this is a joke.’
With her DM to the actor in the background, Lizzo lip synced (perfectly, we might add) to a sound by Tatayanna Mitchell, saying: ‘The reason I’m upset about this one is because I know I’m not gonna be able to marry him, and honestly it hurts me to the core because damn, papi, he a rare breed. No comparing.’
The star, real name Melissa Jefferson, had sent emoji of wind blowing, a man jumping and a basketball, suggesting she was ‘shooting her shot’ (meaning being brave and showing interest in someone you like) with the actor.
She looked nervous at the end of the video, revealing she might end up regretting her recklessness. However it actually paid off as she revealed in a follow up post that the actor had followed her on Instagram, which she circled – multiple times -in red.
Seeing the funny side, he told her: ‘No shame in a drunk DM…god knows I’ve done worse on this app.’
We’re guessing he’s referring to that rude photo leak from last year…
More: US Showbiz news

Of course fans were begging to see the last two messages this week, figuring there must be some juicy stuff hidden behind Lizzo’s head for her to not want to reveal all.
One had mused in the comments: ‘BESTIE MOVE YOUR HEAD I NEED TO SEE THE REST,’ as another simply demanded: ‘Move ur head.’
Suppose we’ll just continue to watch this space.

MORE : Lizzo ‘grateful’ editing apps didn’t exist when she was a teenager as she shares powerful nude selfie

MORE : Chet Hanks shoots his shot at Lizzo after she slides into Chris Evans’ DMs and we can’t keep up