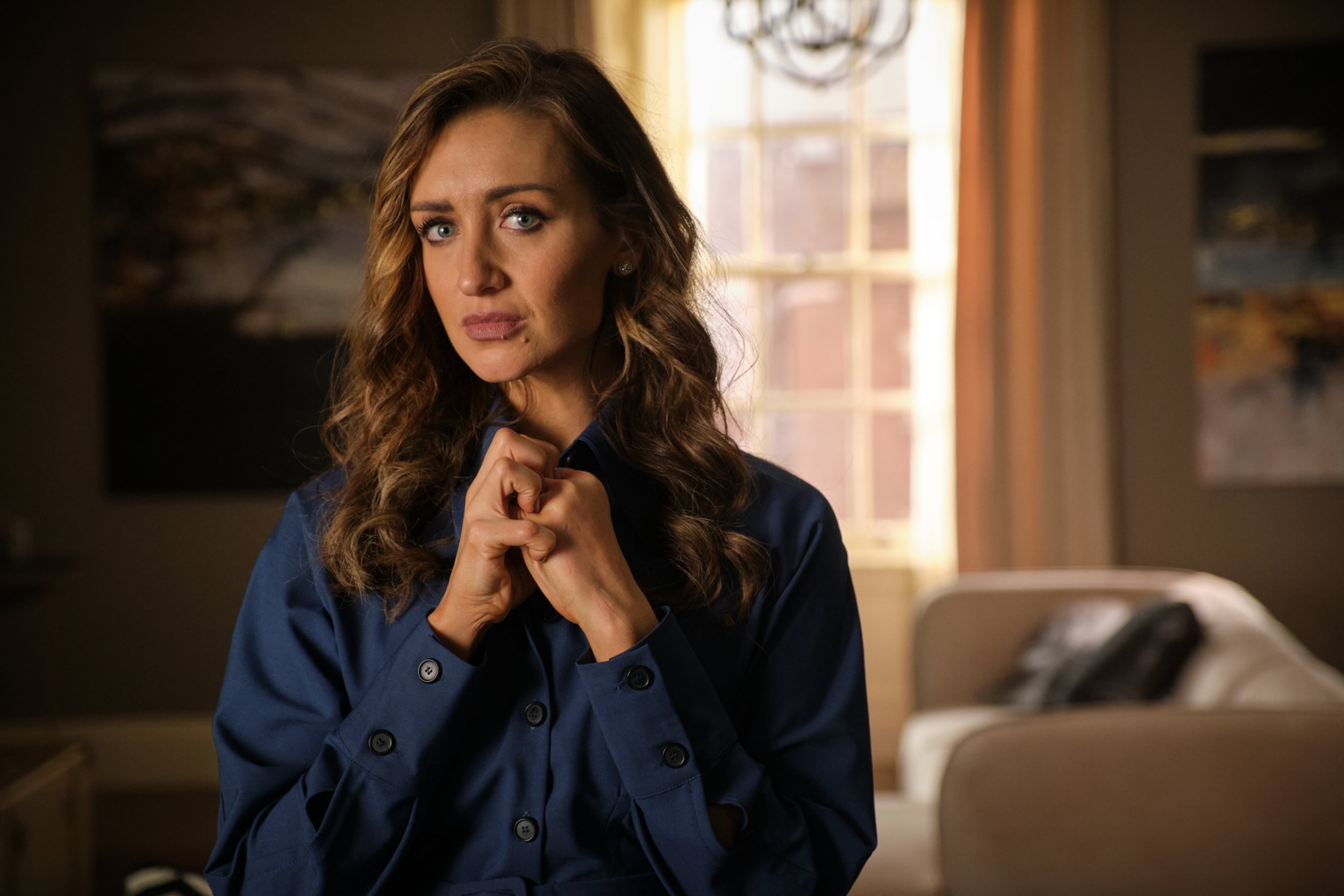 Will Kate turn out to be the culprit? (Picture: Matt Squire/Tiger Aspect Productions)This article was written before Bafta suspended Noel Clarke due to allegations of misconduct.
Warning: spoilers ahead for episode four of Viewpoint.
In episode four of Viewpoint, a new suspect enters the mix in the case of the disappearance of teacher Gemma Hillman (Amy Wren), with fingers being pointed towards Kate Tuckman (Catherine Tyldesley).
In a flashback scene, it’s finally confirmed that Gemma and Carl Tuckman (Dominic Allburn), Kate’s husband, were having an affair before she went missing on the ITV crime drama.
After a heated exchange with Zoe Sterling (Alexandra Roach), who’s been hosting surveillance police officer DC Martin Young (Noel Clarke) in her flat, Kate reveals that she was aware of Carl’s affair and says that she’s willing to look the other way when he has casual flings.
But is she really able to overlook her husband’s indiscretions? Or could his dalliances provide her with a motive for wanting to get Gemma out of the picture?
Did Kate kill Gemma on Viewpoint?
In episode four, Zoe receives a visit from social services, learning that they received an anonymous tip-off from a ‘concerned individual’ who sent in a video showing her heavily drunk while with her young daughter.

Zoe (Alexandra Roach) finds out Kate sent the video (Picture: Ben Blackall/Tiger Aspect Productions)After analysing the footage, which was filmed and sent in by Kate, Martin spots a moment in the video – which was captured a week before Gemma’s disappearance – where Gemma and Carl briefly touch hands, an interaction that most likely witnessed by Kate.
With this in mind, and considering Carl’s first wife Anna went missing 12 years ago when he was having an affair with Kate… could this mean that Kate is behind Gemma’s disappearance, and possibly her death?
It could indicate that Kate also had a hand in Anna going missing too, with the help of close family friend Janice Baines (Karen Henthorn), who was captured on CCTV footage at the time of Anna going missing over a decade previously.
The clues are all adding up… but are the CID (crime investigation department) and Martin on the right track?
Will Martin get in trouble after being caught with Zoe?
Ever since Martin began watching Gemma’s partner Greg from Zoe’s window, he and his host have had an evident connection, with the chemistry between them resulting in a kiss in episode three.
And in episode four, Martin and Zoe sleep together… in a move that could put Martin’s job at risk.

Zoe and Martin have grown close spending time together at the flat (Picture: ITV)When Martin’s colleague DC Stella Beckett (Bronagh Waugh) takes over the surveillance shift and he leaves the flat, he sees that his shirt buttons have been done up incorrectly.
What’s more, he immediately realises that Stella must have noticed as well, as he catches her watching him from the window.
Throughout the series, Martin and Zoe have bent the rules for each other, with Zoe keeping Martin’s secret that he left the flat when he should have been at his post and Martin showing Zoe the footage of her that was sent to social services.
Could this be the final straw that results in Martin’s future at the surveillance unit being in jeopardy?
More: ITV

Could Zoe face Caitlin being taken away from her?
When Zoe receives the visit from the social services worker, they emphasise to her that they have her daughter Caitlin’s (Kíla Lord Cassidy) best interests at heart.
Zoe frets as she’s informed that social services have contacted Caitlin’s school, anguishing over what consequences she might face.
Despite the unlimited supply of love that Zoe evidently has for her daughter, could she face the possibility of Caitlin being taken away from her?
Viewpoint returns tomorrow at 9pm on ITV.
Got a story?
If you’ve got a celebrity story, video or pictures get in touch with the Metro.co.uk entertainment team by emailing us celebtips@metro.co.uk, calling 020 3615 2145 or by visiting our Submit Stuff page – we’d love to hear from you.

MORE : Is Viewpoint based on a true story? Writer shares inspiration behind ITV crime drama