Families of Covid victims find out strangers were buried above them 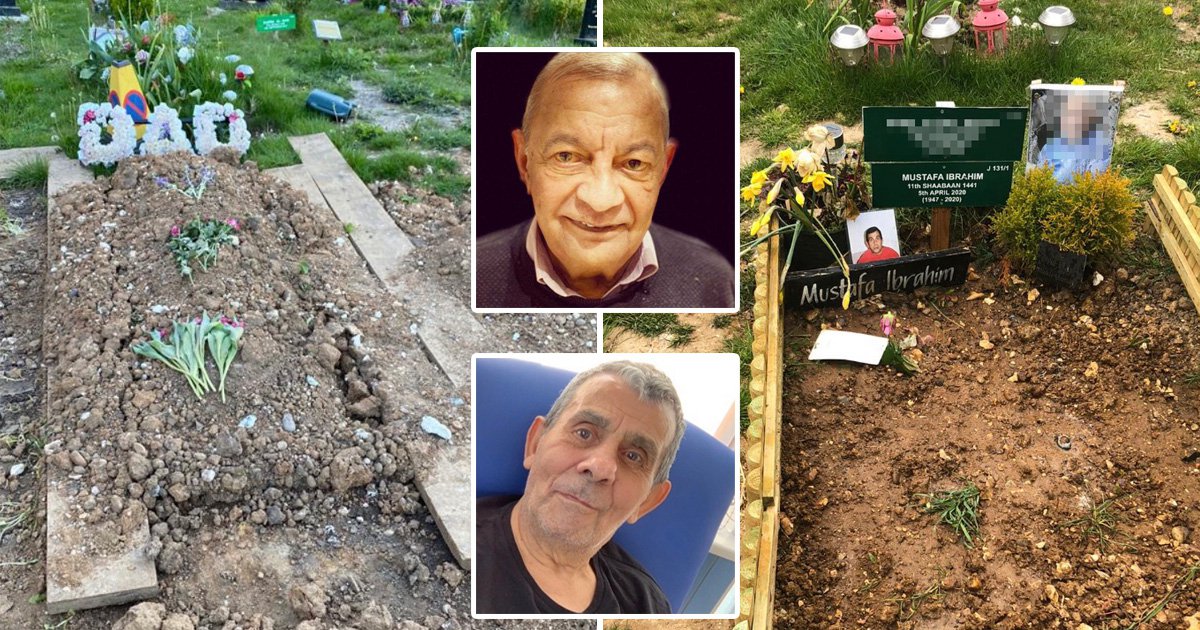 The families of Basheer Meghjee and Mustafa Ibrahim say they have been unable to properly grieve (Picture: Supplied)The families of two men who died with coronavirus have been unable to properly grieve after discovering a stranger’s body was buried on top of their loved ones within days of the funeral.
Relatives of Basheer Meghjee, an accountant who passed away last year aged 76, were distraught to find out someone else had been laid to rest in his plot at Woodcock Hill Cemetery in Hertfordshire last April.
They left a note warning the family of Mustafa Ibrahim, who lay in a plot nearby, that the same may have happened in his grave, leaving his daughter Yucel, 21, ‘disgusted’.
The cemetery is run by Three Rivers District Council, but the Muslim section is leased to the BW Foundation charity, which is linked to the Salaam community centre in Harrow.
Both families signed declaration forms agreeing to the two-tier burial policy, but claim that it was not clear and they were under the belief it would only be implemented if the cemetery ran out of empty plots.
But a High Court judge has ruled in the foundation’s favour following a legal challenge brought by Mr Meghjee’s family.
Mr Meghjee’s nephew Monty, 55, told Metro.co.uk ‘none of us could believe it’ when they heard rumours that another body had been buried on top of him.

Basheer Meghjee passed away on March 25 last year (Picture: Supplied)He said: ‘My uncle passed away right at the beginning of Covid, I think we had just gone into lockdown as well.
‘His immediate family were isolating because they were all a risk of Covid. So at the time we signed the policy we didn’t realise exactly what it meant.
‘But what we didn’t expect was exactly what happened – that 11 days later they dug up his grave and buried somebody else on top without even informing us.
‘We only found out about three weeks later from whispers in the community that this might have happened.’
Mr Meghjee, also an accountant, added that they only discovered the other man’s identity when relatives from both families bumped into each other at the graveside.
More: Coronavirus

Describing the impact it has had, he said: ‘It’s disbelief that it could happen to you. Some family find it hard but accept it because it’s happened now and call it God’s will.
‘But you can’t grieve properly. You can’t talk about it anymore because you feel when you talk about it, it really is quite upsetting that this can happen to you.
‘Going to the cemetery is not the same anymore, because every time you go to the cemetery you end up talking about the same thing again. You don’t feel at peace, because irrespective of the circumstances of Covid you don’t expect this would happen to you.’
During a visit to the mosque soon after, Mr Meghjee heard rumours the same thing was about to happen in the neighbouring plot where Mr Ibrahim was laid to rest following his death aged 72 on April 5.
He left a note wrapped in plastic which was picked up by Ms Ibrahim’s twin sister.
She told Metro: ‘If it wasn’t for Monty, I would never have known there was another man there.’

Yucel Ibrahim pictured with her father Mustafa (Picture: Yucel Ibrahim)Ms Ibrahim added: ‘The reason we didn’t know that this had actually happened was because the second family didn’t put any flowers down, there wasn’t a name or a plaque the same way there was for my dad.
‘There was nothing to show, other than the ground looking raised, there was nothing to show that there was a second person there. We found out a month after.’
She said the discovery has ‘ruined’ the experience of visiting the cemetery and described suffering with anxiety and panic attacks since.
Ms Ibrahim said her dad ‘was someone I was close with and would tell him everything’ whenever she had a problem, adding: ‘But when I go and stand in front of that grave I’m talking to another man as well.’

Two plaques now adorn the plot where Mr Ibrahim was laid to rest (Picture: Yucel Ibrahim)Her family cannot even get her father’s body moved to another plot because it would involve disturbing the other person and his relatives will not give permission for an exhumation.
She added: ‘I’ve lost out on proper grief. I’ve lost out on being able to visit my dad.
‘And it’s not just me, it’s my family as well. My dad has brothers and sisters and they can’t go to the grave.’
The policy was introduced on March 16 last year in response to an expected surge in demand as the pandemic worsened, and which families had to agree to.
It was dropped in August when it became clear there was enough space to meet demand.
More: UK

The Meghjee family launched legal proceedings to try and get the other body exhumed and halt the two-tier system.
But a High Court judge ruled against them due to the fact they had signed the declaration form and the BW Foundation had acted ‘properly and with sensitivity throughout’.
The BW Foundation said it had ‘entered in dialogue with an Islamic jurisprudential’ to ensure that multi-tier burials were acceptable for Muslim burials and had taken ‘extra care in advising family members and the local mosque of this change’.
It added that it has received ‘several complaints’ over the past year that two-tier burials had been carried out without families’ consent, but said it had ‘documented evidence’ which can ‘prove that the accusations are baseless’.
Metro has also contacted Three Rivers District Council for comment.
Get in touch with our news team by emailing us at webnews@metro.co.uk.
For more stories like this, check our news page.