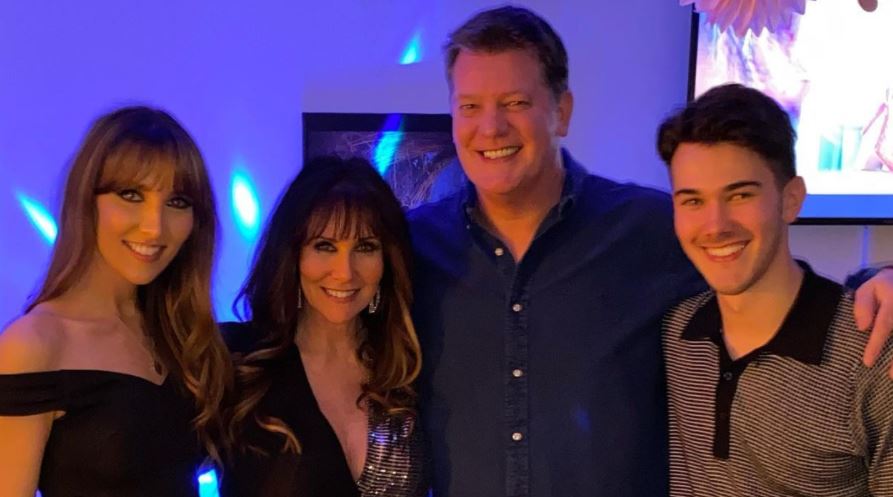 Linda Lusardi’s children Lucy and Jack have needed therapy after her life-threatening fight with Covid-19 (Picture: Instagram)Linda Lusardi’s children needed therapy to help them cope with the stress of their parents becoming seriously ill with Covid-19 at the height of the pandemic.
The former glamour model, 62, was ‘at death’s door’ from Covid-19 last year and was in hospital for 10 days, while her husband Sam Kane was also hospitalised and has been suffering the after-effects of the virus.
She told the Daily Mail that daughter Lucy and son Jack had a ‘short patch’ of therapy to help them process such a terrifying time.
The actress said that she decided therapy was not for her but feels Sam should consider it as ‘he still gets flashbacks about me not coming home’.
Promoting her YouTube series Beauty Angels, Linda said: ‘It’s been horrible for everybody. ‘My kids have had therapy (due to) the trauma of nearly losing both of us.’
‘I did think about therapy but I didn’t in the end. I got to talk about it a lot in interviews and I think it was actually worse for people around me because I didn’t realise how bad I was.

Linda was in hospital fighting for her life earlier this year (Picture: ITV)‘Both Lucy and Jack had a short patch of therapy. They’re absolutely brilliant now.’
The mum-of-two has opened up in the past about the long-term effects after surviving the virus, which included post-traumatic stress disorder (PTSD) and hair loss.
‘I’ve had some hair loss which has been a bit distressing. I still haven’t got the energy I had before although I’m getting there. Every week’s a bit better,’ she said in August.
Linda also confessed she was worried she may be struck down byt he virus again as it’s unclear whether the antibodies produced after the initial infection would protect her or for how long.
She admitted: ‘I don’t feel like I’ve got a guard against it at all’, adding: ‘I don’t feel safe at all. I hardly go out.
‘I go to the supermarket and I see my mum who’s round the corner, who’s 87.’
Got a story? If you’ve got a celebrity story, video or pictures get in touch with the Metro.co.uk entertainment team by emailing us celebtips@metro.co.uk, calling 020 3615 2145 or by visiting our Submit Stuff page – we’d love to hear from you.