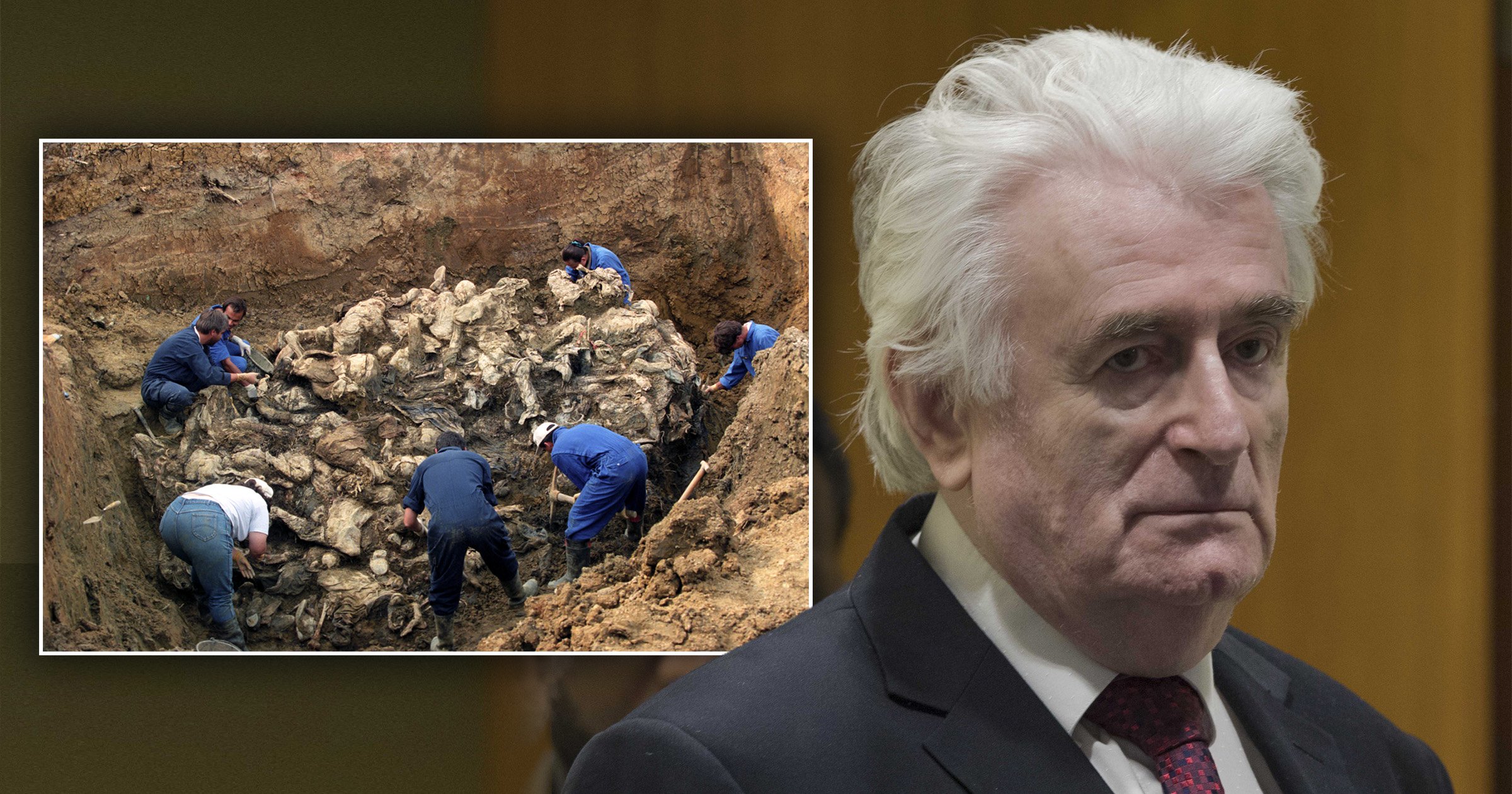 Radovan Karadžić will serve the rest his life sentence in a British prison (Pictures: EPA)Bosnian Serb leader Radovan Karadžić convicted of the 1995 Srebrenica genocide, will spend the rest of his sentence in a British jail, the foreign secretary has announced.
Karadžić, 75, was one of the chief architects behind the mass murder of 7,000 Bosnian Muslim men and boys during the conflict in the former Yugoslavia.
The so-called ‘Butcher of Bosnia’ has also been held responsible for the deaths of an estimated 10,000 civilians during a three-year siege on Sarajevo.
The International Criminal Tribunal at The Hague convicted Karadžić of genocide, crimes against humanity and war crimes in 2016. He was sentenced to 40 years in prison, later increased it to life.
He is currently being held at a UN detention centre in the Netherlands but will be transferred to an unnamed UK prison shortly, Dominic Raab revealed today.
The foreign secretary said: ‘Radovan Karadžić is one of the few people to have been found guilty of genocide.
‘He was responsible for the massacre of men, women and children at the Srebrenica genocide and helped prosecute the siege of Sarajevo with its remorseless attacks on civilians.
‘We should take pride in the fact that, from UK support to secure his arrest, to the prison cell he now faces, Britain has supported the 30 year pursuit of justice for these heinous crimes.’

More than 100 executed people were dumped into a mass grave in a Bosnian village in 1996 (Picture: EPA)

Karadžić opposed being brought to the UK to serve his sentence (Picture: Reuters)The Srebrenica massacre is considered to be one of the worst atrocities committed in Europe since the Holocaust.
It happened during the conflict that ensued after the collapse of the Soviet Union in 1991, when Karadžić was the leader of a Serb territory that broke away from Yugoslavia.
The Bosnian Serb military was used for ethnic cleansing against Muslims and ethnic Croats.
Following the end of the Bosnian war, Karadžić evaded justice for over a decade before he was finally arrested in 2008 in the Serbian capital Belgrade – where he was working as a doctor of alternative medicine under an assumed name.
It is understood that the UK has offered to take Karadžić on a contribution to international justice.

Radovan KaradÅ¾iÄ is one of the few people to have been found guilty of genocide. Britain has supported the 30 year pursuit of justice for these heinous crimeshttps://t.co/A620S92x1f— Dominic Raab (@DominicRaab) May 12, 2021

‘If we want to deter these kind of crimes from happening, if we want to give justice to the many thousands of victims, I think it is right we do our bit,’ said Mr Raab.
Karadžić has tried to fight going to the UK, citing the example of former Serbian general Radislav Krstić, who had his throat slit by Islamic extremists in a prison in West Yorkshire.
His lawyer said: ‘With a high percentage of Muslims among the prison population, we feel Karadžić will be in danger, and to keep him safe will require measures tantamount to solitary confinement.’
It is not clear what prison Karadžić will be taken to, and this will likely not be revealed for security reasons.
Get in touch with our news team by emailing us at webnews@metro.co.uk.
For more stories like this, check our news page.