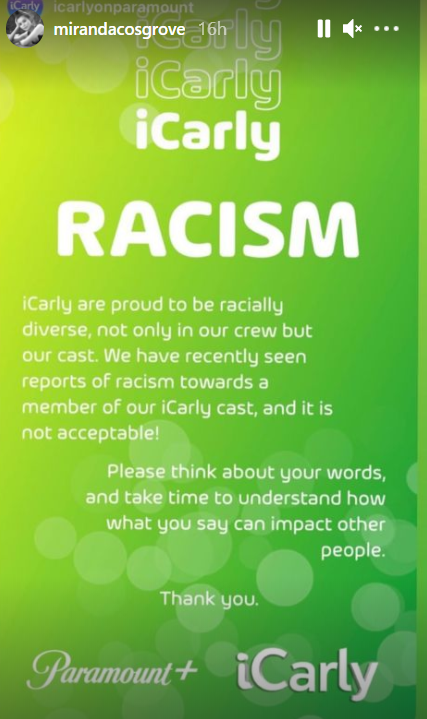 iCarly revival slams racist trolls attacking new cast member Laci Mosley (Picture: Nickelodeon)iCarly star Miranda Cosgrove has made it clear there is no space for racism ahead of the show’s reboot premiere after new cast member Laci Mosley was subject to hateful backlash online.
The hit Nickelodeon series is heading back to screens with a revival series on Paramount+ and sees actress Laci playing Harper, the new best friend/roommate to Carly (Cosgrove).
After pictures of the new cast were shared online last week, some fans decided to make racist slurs in response to the fact Jennette McCurdy’s character, Sam Puckett, was being replaced by a Black woman.
Taking to Instagram on Sunday, Miranda reposted a message from the show’s social media page condemning the hateful comments.
‘iCarly are proud to be racially diverse, not only in our crew but our cast. We have recently seen reports of racism towards a member of our iCarly cast, and it is not acceptable,’ the statement read. ‘Please think about your words and take time to understand how what you say can impact other people.’
Laci also reposted the statement and told her followers: ‘I really feel taken care of at my job they are the best people.’

Paramount slammed racist remarks being made towards the new cast member (Picture: Miranda Cosgrove/Instagram)The A Black Lady Sketch Show star then shared examples of the racist slur being posted underneath her pictures as she added: ‘I’ve been deleting and blocking people but I can’t be bothered anymore, stay mad.
‘I felt silly being upset by racism cause it’s just how this terrible planet is but sometimes it still catches me off guard.’
More: US TV news

Laci’s casting on the show came after Jennette McCurdy spoke out about quitting acting, and her embarrassment over her previous work as a child star.
The iCarly reboot premiers June 17 on Paramount+ in the US.
Got a story?
If you’ve got a celebrity story, video or pictures get in touch with the Metro.co.uk entertainment team by emailing us celebtips@metro.co.uk, calling 020 3615 2145 or by visiting our Submit Stuff page we’d love to hear from you.