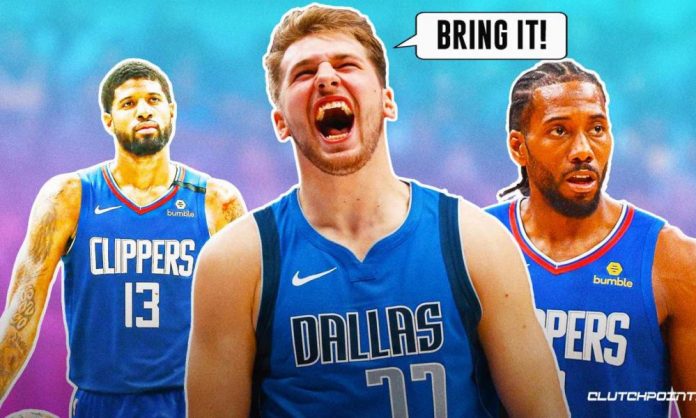 Dallas Mavericks superstar Luka Doncic is ready for the playoffs. With the Mavs set to take on a mighty Los Angeles Clippers in the first round, Doncic was quick to sound off on anyone that is doubting Dallas’ chances against Kawhi Leonard, Paule George, and Co.

When asked about what he thinks about his team’s first-round matchup against the Clippers, Doncic needed only six words to respond (h/t Callie Caplan of the Dallas Morning News):

Luka Doncic on facing the Clippers in the first round: “It’s a hell of a matchup.”
— Callie Caplan (@CallieCaplan) May 17, 2021

Luka’s statement may have been brief, but it is a clear indication of the type of mindest he possesses coming into what should be an epic first-round war.
The fifth-seeded Mavs enter the series as the underdogs, with the fourth-placed Clippers securing home-court advantage. Nevertheless, Doncic has already been in the same position in the past, and he’s more than capable of upsetting the odds.
It is worth noting that the Mavs also faced off against LA in the first round last season in what turned out to be quite a controversial matchup. Dallas put up a formidable fight, but in the end, it was the Clippers who prevailed in six games.
That bitter loss is surely still fresh on the minds of Doncic and the Mavs, and they will be looking to exact revenge this time around. It won’t be an easy road ahead for Dallas, but if things go their way, we could be looking at a first-round upset here. Luka Doncic clearly understands what’s at stake, and he will be doing everything in his power to take his team to the next level.

Facebook
Twitter
Pinterest
WhatsApp
Previous articleTeen ‘sexually abused nine toddlers’ at nursery where he worked as an assistant
Next articleMartin Bashir leaves BBC in the midst of investigation into his meeting with Princess Diana!!!