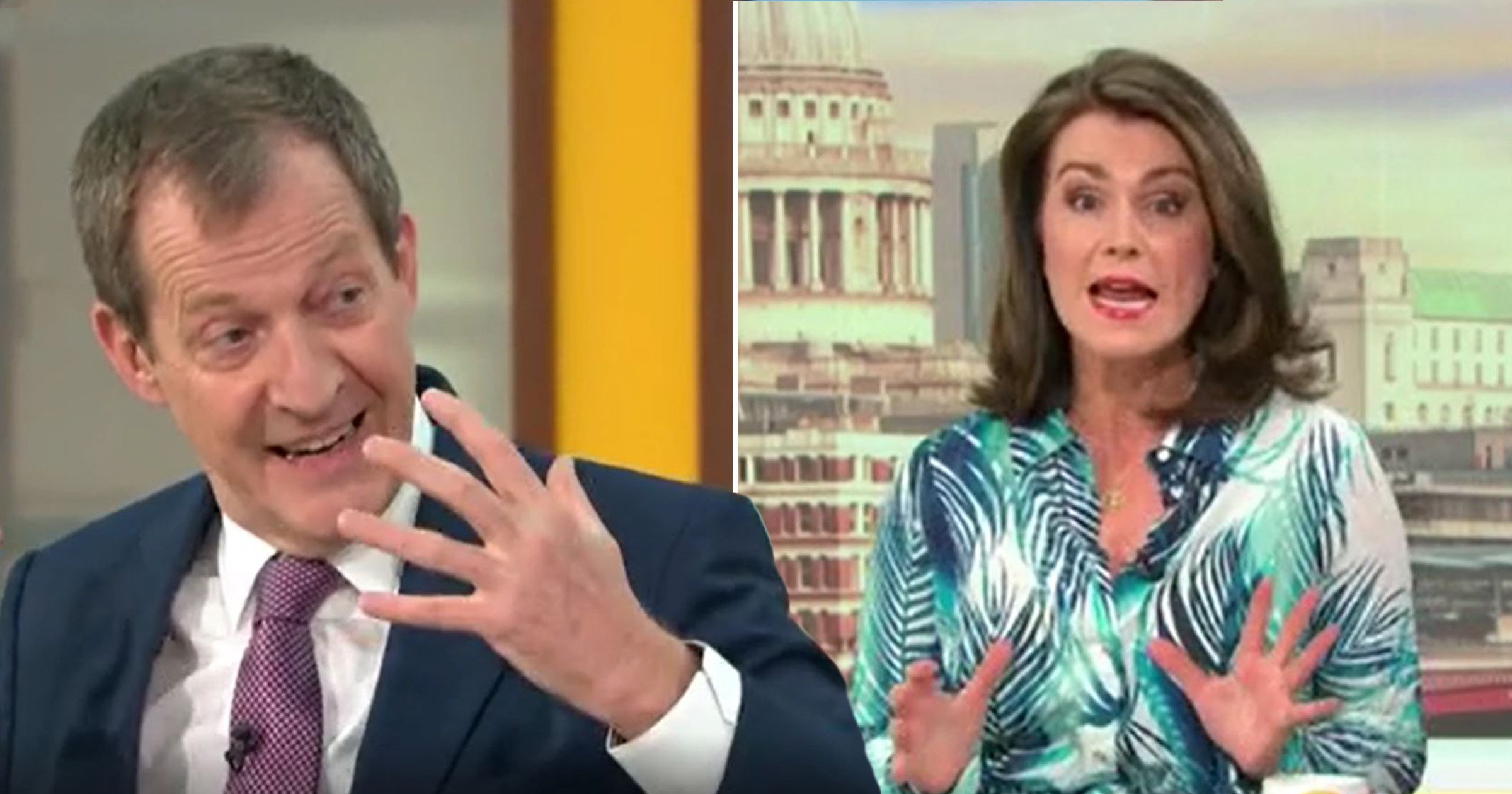 Susanna Reid calls out Alastair Campbell over another premature tweet
(Picture: Ella Millward)Susanna Reid called out former Good Morning Britain host Alastair Campbell following today’s programme after he accused reporters of giving Kwasi Kwarteng an easy ride despite the threat of the Indian variant.
As the United Kingdom enjoys the biggest easing of lockdown since Christmas with pubs opening indoors, and people are finally allowed to hug their loved ones, the Indian strain of coronavirus is becoming an increasing concern with cases steadily rising.
Boris Johnson has subsequently come under for keeping India out of the Red Zone list until April 19 with 20,000 people coming into the UK despite case huge positive case numbers and deaths in the country.
Kwarteng appeared on several news stations this morning, including Good Morning Britain, where host Adil Ray launched a blistering attack on the Business Secretary, who attempted to divert attention from the imposing threat of the Indian variant to the success of the vaccine programme.
Adil, however, was having none of it.
No wonder then Susanna called her former co-host out when he tweeted: ‘Off air, barely a journalist alive not thinking that the current Covid problems were caused by Johnson delaying India going on the red list to allow him to glad-hand with Modi.

Boris Johnson has come under for keeping India off the Red Zone list
(Picture: James Veysey/Shutterstock)‘On air, barely a word … Pravda stuff. As for @KwasiKwarteng another advert for shutting down Eton.’
Not on Susanna’s watch.
‘Hard disagree,’ she hit back. ‘We repeatedly grilled him about it.’
After prematurely hitting out at Piers Morgan last week, the former Labour spin doctor spoke too soon again, and praised Adil for holding Mr Kwarteng to account.

He replied to Susanna: ‘See last two tweets!! I was out with the dog. Have caught up. Well done. Proper Qing.’
Sharing a clip of Adil, Alastair called out BBC Politics and wrote: ‘ Memo @BBCPolitics this is how you hold ministers to account when they are lying obfuscating or refusing to accept responsibility. Well done @adilray … scandal upon scandal.’
Campbell filled in for Adil on Good Morning Britain during Mental Health Week last week, and got caught up in the most colossal TV gaffe when he accidentally announced the death of Queen Elizabeth.
Good Morning Britain airs weekdays at 6am on ITV.
Got a story?
If you’ve got a celebrity story, video or pictures get in touch with the Metro.co.uk entertainment team by emailing us celebtips@metro.co.uk, calling 020 3615 2145 or by visiting our Submit Stuff page we’d love to hear from you.

Facebook
Twitter
Pinterest
WhatsApp
Previous articleHow Henry Golding is the New Face for Snake Eyes?? How he got in the New G.I. Joe Franchise?
Next articleMeghan Markle And Prince Harry’s Wax Figures Moved From The Royal Family Section To The Hollywood Display!