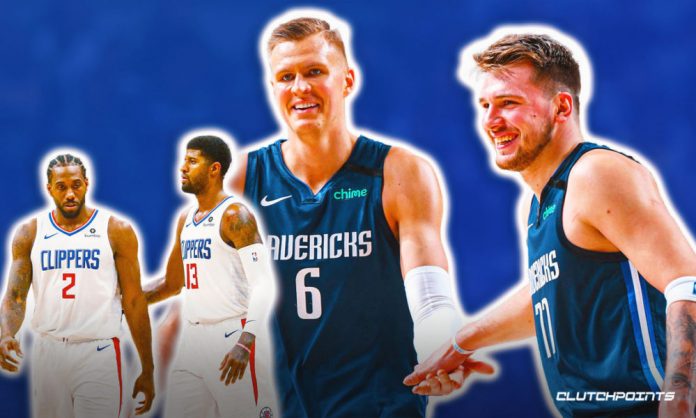 The Dallas Mavericks will have a tough matchup against the Los Angeles Clippers in round one of the playoffs. This year the Mavs have the tools to stop Paul George and Kawhi Leonard.

This is a rematch of last year’s first matchup where the Clippers eliminated the Mavericks in 6 games. Even though the Clippers were title contenders they had a tough series against Luka Dončić and the Mavericks.
Here are 3 ways the Mavericks can stop Kawhi Leonard and Paul George to win the playoff series.
Mavs keys vs. Clippers:
3. Limit Paul George’s 3-point shot
George has a good 3 point shot and shutting it down will be important for the Mavericks. If the Mavs are going to win the series they will need to limit George’s shot attempts from downtown.
The Mavericks have the ability to limit his shot through schemes and throwing different defenders at him. Tim Hardaway Jr. will likely see time on George and he is a great defender. Hardaway Jr. will have to be relied on heavily by the Mavs in this series.
If the Mavericks can limit George’s 3 point percentage to around 30 percent, they are in good shape to contain him.
2. Limit Kawhi Leonard’s mid-range game
Leonard is known as a defender but his offense is almost as good. He is great at getting to his spots in the midrange and making plays happen. The Mavs will need to limit his midrange if they are going to win this series. Forcing Kawhi to take tough 3 point attempts or contested shots in the paint will make it tough on him. Obviously a player like Leonard will find a way to score the ball but they need to make him take 20 plus shots.
If the Mavs can keep Leonard under 30 points on 20 or more field goal attempts they are setting themselves up for a successful series.
1. Force Leonard and George to play isolation ball
You may be thinking why would you let Leonard and George play isolation ball? They are two of the best players in the league at getting to spots and creating for themselves but this forces them to make every play. In last years playoffs it was shown that the Clippers didn’t have a playmaking point guard to initiate the offense. The Clippers were forced to put the ball in Leonard and George’s hands to make plays every possession. Although they had some success scoring the ball it limited overall team play for them. The great 3-point shooters on the Clippers will not have an impact if they do this. Leonard and George are not playmakers and forcing them to initiate the offense will be in favor of the Mavs.
The Clippers added Rajon Rondo to fix this so it is important for the Mavs to keep it out of his hands. They thrive the most when the stars are able to play off the ball.
The Mavs need to game plan against this so the stars need to have the ball every possession.
If the Mavs are able to make these adjustments they have a great shot at winning the series.

Facebook
Twitter
Pinterest
WhatsApp
Previous articleBill Gates Confesses To Cheating On His Wife Of Nearly 3 Decades Amid Divorce And No One Is Surprised!
Next articleOfficial Images of LEGO Marvel 76191 Infinity Gauntlet Revealed!