HomeGamingLeBron James' responds to 'playing on one leg' comments
GamingHealthPoliticsScienceSports

LeBron James’ responds to ‘playing on one leg’ comments 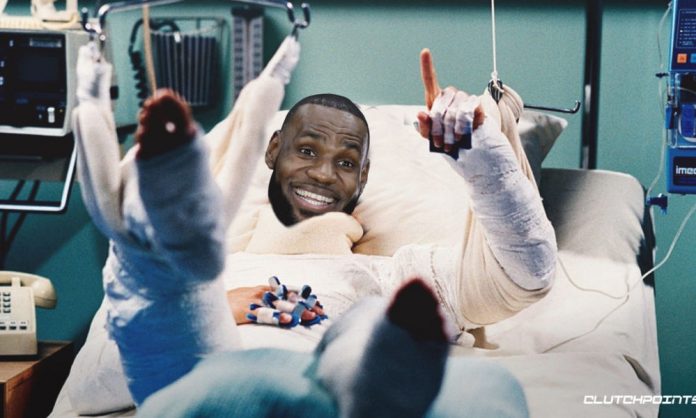 It’s no secret that LeBron James is pretty banged up right now. However, if you ask the Los Angeles Lakers star himself, it looks like he’s ready to go for what should be a grueling playoff run ahead.

LeBron’s health has been a cause for concern for the defending champs heading into the postseason. Some reports even suggested that the Lakers superstar is currently “playing on one leg.”
James was quick to play down the injury concerns as he expressed how prepared he is for their title defense:
“I’m good. I told you guys I was good. I’m good,” said the Lakers star, via Harrison Faigen of Silver Screen & Roll. “That’s the most minutes I’ve played in a long time and I didn’t feel anything on that play. Draymond’s finger or thumb or whatever went directly into my eye, and that’s why I was down. Just making sure I was okay, making sure I wasn’t bleeding and making sure I could see a little bit at least so I could finish the game.”
And finish the game he did. Despite being poked in the eye by Draymond Green, LeBron looked fine as he drained a thirty-foot bomb over Stephen Curry himself to lift the Lakers over the Warriors in what was truly a battle for the ages.
The Lakers were able to secure the seventh seed in the conference and they have now set a date with the second-seeded Phoenix Suns in the opening round of the playoffs. That’s only going to be the start for LA, but based on his comments above, LeBron is good to go.