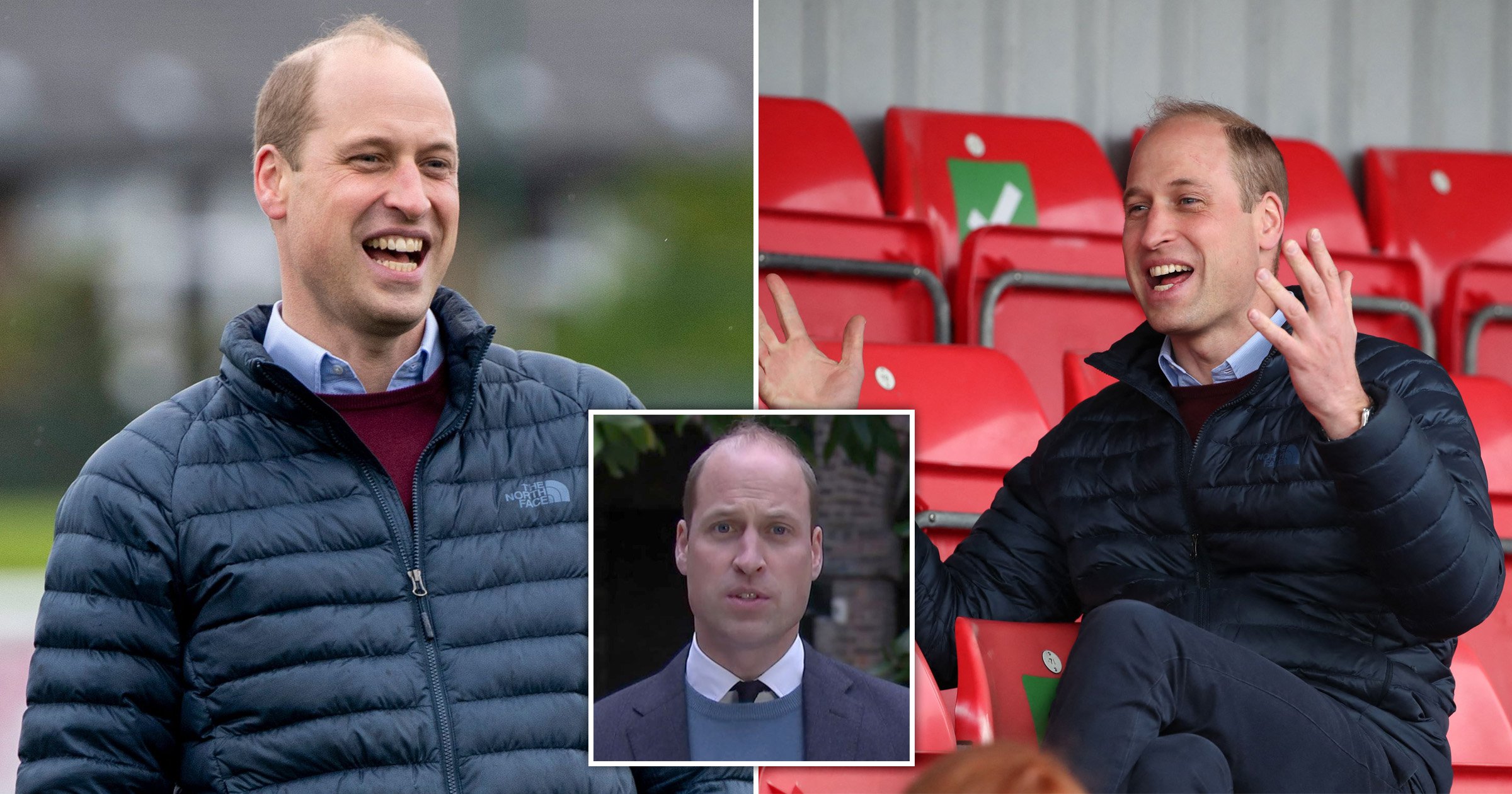 Prince William seen for first time since Harry accuses royals of ‘total neglect’ (Picture: Getty)Prince William was seen laughing and joking today as he kicked off a week-long tour of Scotland with a trip to an Edinburgh football club.
The Duke of Cambridge was photographed chatting to players of a lower league club just hours after his brother criticised the Royal Family as part of a new documentary series.
In the first episode of The Me You Can’t See, with Oprah Winfrey, The Duke of Sussex singled out Prince Charles, accusing him of allowing him and William ‘to suffer’.
Harry said: ‘My father used to say to me when I was younger, he used to say to both William and I, “Well, it was like that for me, so it’s going to be like that for you”’.
‘That doesn’t make sense. Just because you suffered, that doesn’t mean your kids have to suffer. Actually quite the opposite.
‘If you suffered, do everything you can to make sure that whatever negative experiences you had, you can make it right for your kids.’
But William kept his eye on the ball following his brother’s latest comments as he practiced his touch skills during a drill challenge at Ainslie Park Stadium, home of The Spartans FC.
After showing off his skills on the pitch, the future king and president of the Football Association chatted to footballers from the UK’s four national teams during a video call, including England star Harry Kane.

William made a televised statement blasting the BBC on Thursday night following an inquiry into Martin Bashir and his infamous interview with Princess Diana (Picture: PA)Harry had also opened up about his struggle with mental health and said his wife Meghan would ‘cry into her pillow’ at night after recording the bombshell Oprah interview earlier this year.
He said: ‘Before the Oprah interview had aired, and because of their headlines and the combined effort of The Firm and the media to smear her, I was woken in the night to hear Meghan crying into her pillow because she doesn’t want to wake me up because I’m already carrying too much…That’s heartbreaking.’
He added that Meghan did not give into her suicidal thoughts over how ‘unfair’ she thought it would be for him to lose a second woman in his life.
It comes after Prince William blasted the BBC on Thursday evening following an inquiry into Martin Bashir and his 1995 interview with Princess Diana.
The report found that the broadcaster covered up ‘dreadful behaviour’ used by Mr Bashir to secure the televised sit down with the Princess of Wales.

Prince Harry spoke out against the Royal Family in his new documentary series The Me You Can’t See (Picture: GMA)More: Prince Harry

William said: ‘It brings indescribable sadness to know that the BBC’s failures contributed significantly to her fear, paranoia and isolation that I remember from those final years with her.’
He added that the broadcaster ‘let my mother down, my family down and let the public down too.’
Prince Harry echoed his brother’s sentiment, saying in a statement: ‘The ripple effect of a culture of exploitation and unethical practices ultimately took her life.’
Prince William was joined on Friday by grassroots players from Scotland’s Mental Health Football and Wellbeing League and former Scotland striker Steven Thompson.
The League was set up to support recovery and tackle stigma associated with mental health, with support from the Scottish FA.
Get in touch with our news team by emailing us at webnews@metro.co.uk.
For more stories like this, check our news page.