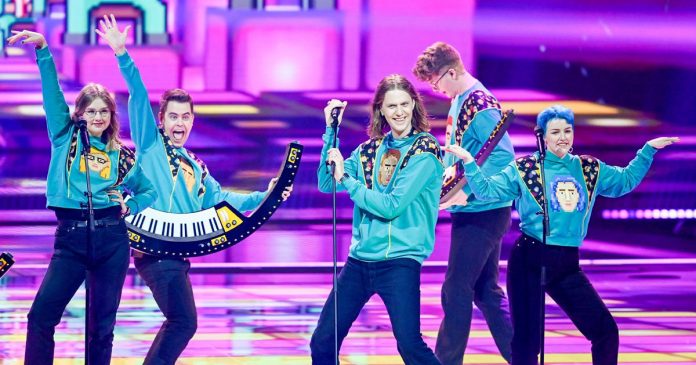 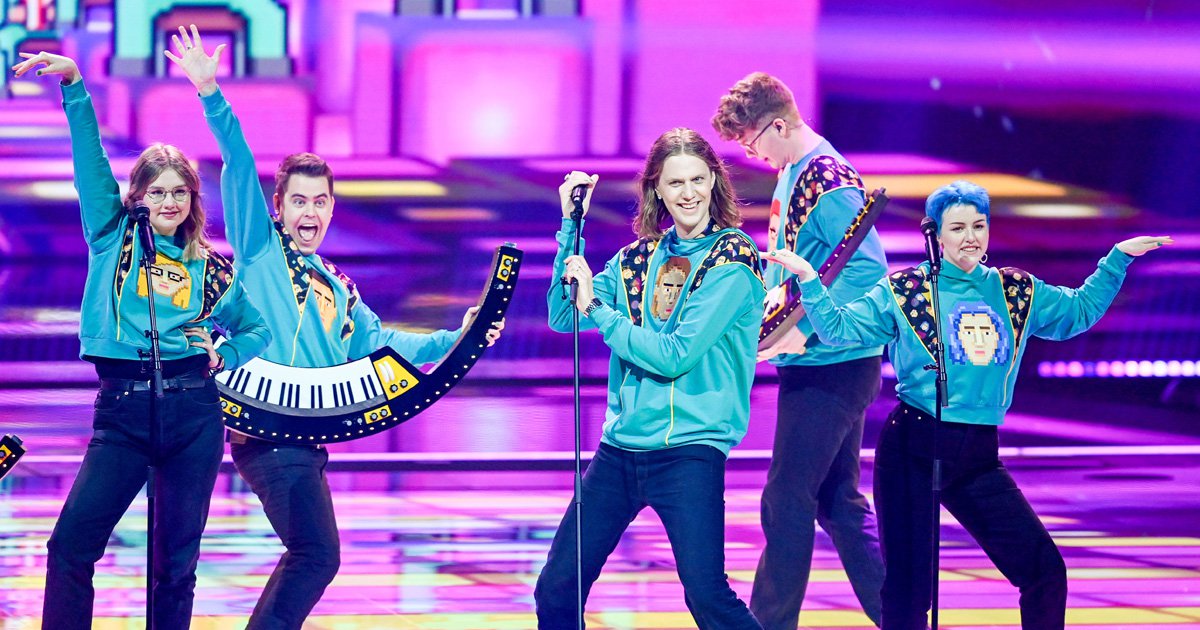 Iceland’s Daði & Gagnamagnið impressed Eurovision 2021 viewers (Picture: Rex)Eurovision Song Contest viewers were impressed by Iceland act Daði & Gagnamagnið after they put on a colourful performance of their song 10 Years on Saturday night.
The band have not had the best of luck so far as they were hoping to take home the crown at last year’s competition before it was cancelled due to the coronavirus pandemic.
And this week a member of the group tested positive for Covid-19 ahead of their semi-final effort.
However, their 2020 song Think About Things went viral on TikTok after 2020’s cancellation and they left the audience at home delighted by their 2021 performance.
Taking to Twitter, one person wrote: ‘Iceland was my fav song last year. This is very similar. Fun group #SBSEurovision #Eurovision.
Another person exclaimed: ‘Give them the medal RIGHT NOW 9/10 #ICELAND #ISL #Eurovision.’

Iceland’s act have not had the best of luck this year after one of their members was struck down with coronavirus (Picture: Rex)While someone else was already making plans to get concert tickets: ‘Yeah I’m gonna need to see Iceland live #Eurovision.’
‘Tune last year (still listen to it on Spotify), tune this year. Iceland for the win at #Eurovision. Gets my vote #ISL #Iceland,’ wrote another Twitter user.
‘Iceland have smashed it, t’others should just go home #Eurovision #iceland,’ wrote one viewer.

#iceland #isl #eurovision THEY HAVE TO WIN THIS IS ART THIS IS PERFECTION!THEIR KEYTARS JOIN TOGETHER!THIS IS THE BEST SONG— ð¼ð Panda Steve Sugarbaker ðð¼ (@ItsPandaSteve) May 22, 2021

Iceland standing still for 15 seconds on Eurovision stage at the end of “10 years”, because it is 2 minutes and 45 seconds and they want to get their whole 3 minute on stage Eurovision experience, is just I C O N I C and a thing I would do too ðð­. #Eurovision #OpenUp pic.twitter.com/FuIWu8NAnE— Mariað¬ð· | ð§ð¬ð®ð¹ð¨ð­ (@_maria_polo_) May 22, 2021

Iceland’s act did not perform in the Eurovision Song Contest live semi-final shows after one of the band tested positive for Covid-19.
Daði og Gagnamagnið are one of the favourites to make it into the top five in the Eurovision final with their song 10 Years, thanks to the success of their 2020 entry Think About Things.
However, their semi-final performance was replaced with a recording of their rehearsal, with frontman Daði confirming that one of the group tested positive for Covid.
He tweeted this week: ‘A member of Gagnamagnið got a positive test result this morning.
‘Unfortunately this probably means that we will not take part in the rehearsal today or live show tomorrow and a recording from our second rehearsal will be used instead.

‘We have all been extremely careful the whole trip so this comes as a huge surprise. We are very happy with the performance and super excited for you all to see it! Thank you for all the love.’
A statement from the European Broadcasting Union (EBU) confirmed: ‘Today (Wednesday 19 May) a member of the Icelandic group Daði og Gagnamagnið also tested positive for COVID-19. The rest of the delegation has again tested negative for COVID-19.
‘In close collaboration with the EBU and the host broadcaster, Daði og Gagnamagnið have taken the difficult decision to withdraw from performing in this year’s live Eurovision Song Contest shows, as they only want to perform together as a group.
‘Their song will remain in the competition and we will broadcast their rehearsal performance, recorded on the stage on 13 May.
‘The Icelandic delegation will remain in quarantine and be monitored by the Health Authorities.’
More: Eurovision Song Contest 2021

This came after the Icelandic broadcaster RÚV reported the band’s rep Rúnar Freyr Gíslason as saying: ‘It’s a big blow.’
The report also claimed that the band had been vaccinated with the Janssen, or Johnson & Johnson, jab prior to going to Rotterdam.
Got a story?
If you’ve got a celebrity story, video or pictures get in touch with the Metro.co.uk entertainment team by emailing us celebtips@metro.co.uk, calling 020 3615 2145 or by visiting our Submit Stuff page we’d love o hear from you.

MORE : Who is Eurovision host Nikkie de Jager, aka NikkieTutorials?

Facebook
Twitter
Pinterest
WhatsApp
Previous articleFinal trailer for ‘A Quiet Place Part II’ drops over a year after we thought it came out!!!
Next articleTamar Braxton Reveals A New And Exciting Campaign