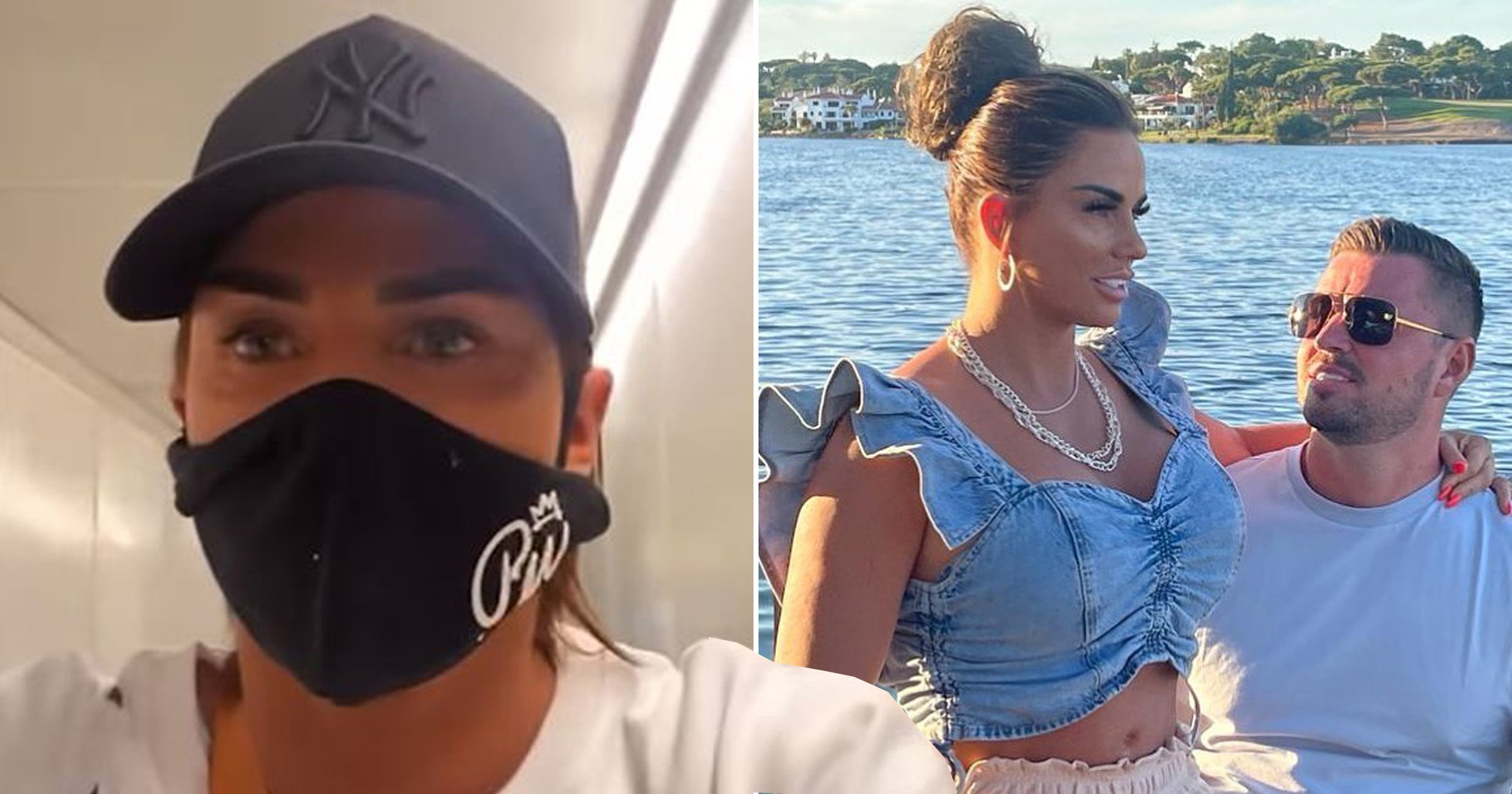 Katie and her friend had concerns when coming back through Heathrow Airport (Picture: Facebook/Instagram/katieprice)Katie Price has shared her criticism with fans over the lack of Covid protocols at Heathrow Airport when she flew home from Portugal.
Travelling with friends, Katie shared a video to her Facebook page of footage she’d filmed in order to give ‘insight’ to the current processes and ‘raw information’ for fans who want to travel.
The model and her fiancé, Carl Woods, were among the first to jet out to Portugal last Monday with their pals, when travel restrictions were lifted and the country was placed on the green list for UK travellers – meaning no mandatory quarantine.
However, travellers to green-list countries are still required to produce proof of a negative test before returning to the UK, as well as take a PCR test two days afterwards.
Having cleared Faro Airport, which Katie described as ‘one of the most easiest [sic] times I’ve ever had to go through departures’, she was less than impressed with Heathrow Airport’s procedures.
Although also quiet, as Katie and her friend walked through the airport, they explained how no one had asked to see their Covid documentation.

Katie and her friend shared their experiences as they landed (Picture: Facebook/Richard Ainsworth)Her friend said: ‘We just went through passport control and no-one asked to see our passenger locator form, no-one asked to see proof of a negative Covid test.’
He continued: ‘All the measures that are supposed to be in place – nothing was checked.’
As they passed a TV news crew commenting on PCR tests, Katie chimed in: ‘Well, they didn’t ask to see our PCR tests when we landed.’
At the baggage carousel, Katie was also not particularly happy as she showed the list of arrivals and their carousel allocation on a screen.

Katie was keen to give the ‘raw information’ to her fans (Picture: Facebook/Richard Ainsworth)Katie’s flight from Portugal was sharing a carousel with a flight from Abuja, Nigeria, a country on the amber list.
She explained: ‘If you look on the screen, some of them [sic] place are on the amber list, who are due to come in this hall – where we are now – which means we’re going to cross paths and some of them need to quarantine.
‘So how does that work?’
Her friend continued: ‘Our bags now are being mixed on the same carousel – how mad is that?’
‘Very’, Katie agreed.

Katie and Carl had enjoyed a quick getaway to Portugal, staying in a private villa (Picture: Instagram/katieprice)As they exited the airport, Katie confirmed that it was ‘really quiet’ and ‘so empty’, unlike the ‘manic’ experience she’d been expecting at the top of the video and the beginning of her trip home.
Border Force has been contacted by Metro.co.uk for comment.
Follow Metro across our social channels, on Facebook, Twitter and Instagram.
Share your views in the comments below.