HomeBusinessProtesters take the knee across UK to mark one year since George...
BusinessGeneralScienceTechnologyWorld News 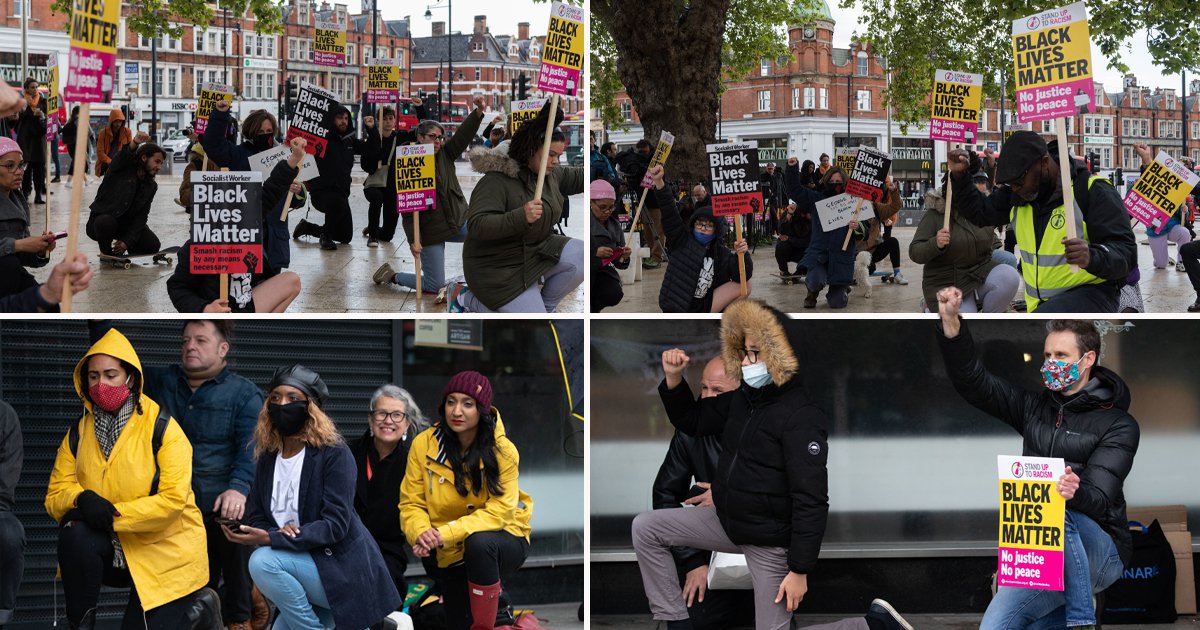 People across Britain marked the anniversary of George Floyd’s death with anti-racism demonstrations (Picture: Rex/PA)Thousands of people across the UK took part in events to mark the one-year anniversary since George Floyd was murdered by a white police officer in the USA.
The campaign group Stand Up To Racism called on Brits to take the knee on Tuesday, 12 months after the black American’s death. Mr Floyd’s killing sparked a backlash against racism and police brutality, as black lives matter protests erupted across the globe.
Evening vigils and gatherings were planned in dozens of cities across the UK, including London, Edinburgh, Bristol, Birmingham and Manchester.
In Scotland, a Black Lives Matter event at the Scottish Parliament saw people kneeling, laying flowers and leaving messages.
Meanwhile, in Wales, a poem written in tribute to Mr Floyd by Welsh-Zimbabwean Kel Matsena is being projected on a museum in Swansea.
Stand Up to Racism said: ‘We want to show that the overwhelming majority want to end racism and discrimination’.
It is joining with the Trade Union Congress in a week of action to commemorate Mr Floyd’s death, that saw people take the knee in Brixton’s Windrush Square on Tuesday.

Some found the event in Edinburgh emotional (Picture: Getty Images)Vineeth Ravindran, an NHS cardio-respiratory physiotherapist, organised the taking of the knee with his colleagues at Borders General Hospital in Melrose, Scotland.
He said: ‘It was very relevant for all of us to reflect upon George’s death today to stand up against racism and embrace cohesive community spirit to reduce health inequalities.’
In Chesterfield, James Eaden joined around 50 people at Rykneld Square in an action which he said was an ‘important part’ of continuing the message of the BLM movement.
‘Black Lives Matter has to be a “movement and not just a moment”,’ Mr Eaden said.
‘We have made important strides in taking an anti-racist message into our community… but racism continues.’

Demonstrators made their feelings known in Brixton (Picture: Shutterstock)

The TUC and Stand Up To Racism are holding a week of action to commemorate Mr Floyd’s death one year on (Picture: PA)In the USA, one person has been shot amid reports of gunfire at George Floyd Square as countless people marked the anniversary across the country.
White police officer Derek Chauvin – who knelt on 46-year-old Mr Floyd’s neck for more than 9 minutes – was found guilty of his murder in April.
The Minneapolis intersection where Floyd pleaded for his life was disrupted by gunfire on Tuesday – hours before it was to be the site of a family-friendly street festival marking the anniversary of his death at the hands of police.
Police later said one person later appeared at a nearby hospital with a gunshot wound, but it wasn’t immediately clear if that person was hurt in the incident near the intersection.
The square was being transformed into an outdoor festival on the anniversary of his death, with food, children’s activities and a long list of musical performers.

‘We’re going to be turning mourning into dancing,’ rapper Nur-D tweeted.
‘We’re going to be celebrating 365 days of strength in the face of injustice.’
The ‘Rise and Remember George Floyd’ celebration, including a candlelight vigil at 8pm local time on Tuesday, caps several days of marches, rallies and panel discussions about his death and where America is in confronting racial discrimination.
Meanwhile, George Floyd’s family visited Washington to mourn with president Joe Biden and pressure Congress to act, with the President promising to sign a police reform bill.
More: Racism

Back in the UK, Sir Keir Starmer said that eradicating structural racism would be a ‘defining cause’ for the next Labour government.
The party leader, along with shadow cabinet ministers David Lammy and Marsha De Cordova, promised to continue campaigning to tackle racial injustice and introduce a race equality act.
Shadow justice secretary Mr Lammy said: ‘George Floyd looked like me, he could have been me. That’s why his death reverberated around the world. People said: none of us can breathe when we still face the issues of structural racism in our lives every day.
‘That’s why George Floyd’s death sparked a global movement, from Minneapolis to Manchester to Mile End. Black and white people came together to say Black Lives Matter.’
Ms De Cordova added that a Labour administration would introduce a curriculum to give young people ‘a balanced understanding of Britain’s past and how it has shaped society today’.
Get in touch with our news team by emailing us at webnews@metro.co.uk.
For more stories like this, check our news page.