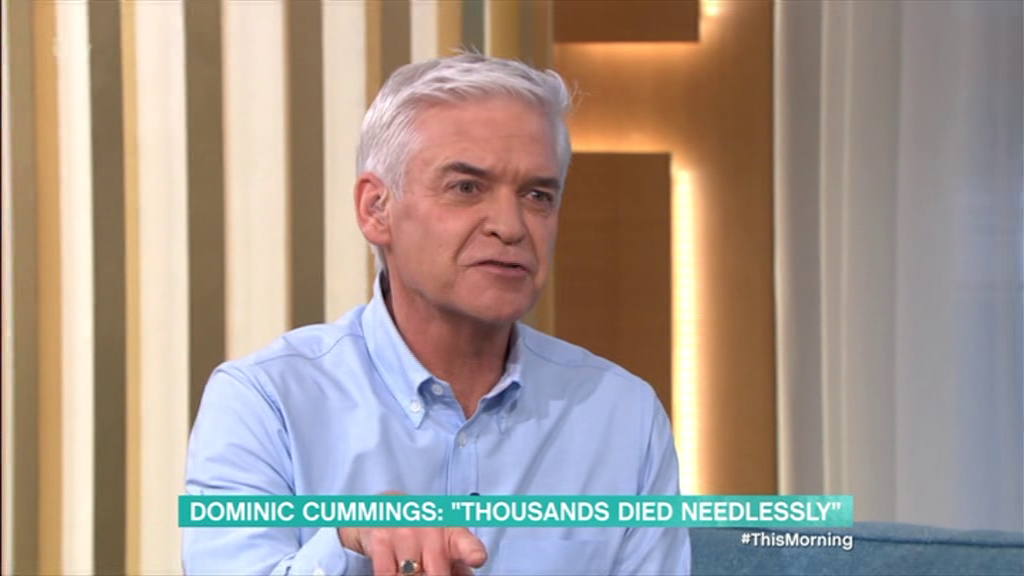 Phillip Schofield has lambasted Dominic Cummings over his honesty regarding his ‘trip to Barnard Castle’ after the former top aide’s scathing attack on the government.
On Wednesday May 26, Cummings appeared before a joint parliamentary committee, where he made a series of shocking claims about the government’s handling of the coronavirus pandemic, including that the government’s lockdown plan had a section on ‘who do we not save?’
Cummings also apologised over how his infamous trip to Barnard Castle unfolded, saying: ‘I am extremely sorry over the whole thing’, explaining that he was trying to deal with security issues at the time and didn’t tell the ‘full story’.
During the first lockdown, Cummings was heavily criticised after he claimed that he drove to the town of Barnard Castle to test his eyesight before a longer journey, having previously been unwell with coronavirus.
On Thursday’s edition of This Morning, Schofield called out the fact that Cummings didn’t tell the whole truth at the time, after guest Beverley Turner said that Cummings ‘himself said they needed to be more transparent’, adding: ‘A lot of this confusion and the mistrust perhaps wouldn’t have happened if they’d been more honest from the start.’
‘Shame he wasn’t a bit more honest about his trip to Barnard Castle, but we’ll come to that in just a moment,’ Schofield responded.

Schofield makes a dig at Cummings after the headline-making testimony (Picture: ITV)Before making his jibe about Cummings, Schofield explained how before Cummings’ testimony took place, there were people saying that ‘this is a story that’s going to stay in Westminster’, saying that they weren’t ‘sure that anybody is going to be bothered around the country’.
‘And then you get this hatchet job that went on,’ he said.

See also  Will there be a 'Mare of Easttown' Season 2? Will Kate Winslet return to the HBO Max series!!!

Cummings made a series of shocking revelations (Picture: EPA)Later during the segment, Matthew Wright – who was appearing as a guest over video chat – said that ‘you do think that somebody needs to be held accountable’ over the handling of the pandemic, although an enquiry isn’t going to take place until next year.
Schofield said that in his view, ‘regardless of whichever government’ happened to be in power, it was ‘going to be bumbling’.
‘Regardless of whichever government it happened to be at that time when this thing strikes, if it’s never happened before, including Cummings and the prime minister and the health secretary, isn’t there going to be bumbling until you figure out what the hell’s going on?’ he said.
More: This Morning

Following Cummings’ testimony, several people on social media remarked that they can see Benedict Cumberbatch playing the political strategist for a second time to depict the series of events.
Cumberbatch first played Cummings in the 2019 Channel 4 drama Brexit: The Uncivil War.
This Morning airs weekdays at 10am on ITV.
Follow Metro across our social channels, on Facebook, Twitter and Instagram.
Share your views in the comments below.

MORE : Holly Willoughby stunned as infuriated Phillip Schofield hangs up on caller: ‘That was brutal!’

MORE : Kate Garraway feared being ‘consumed with anger’ if she looked for someone to blame after Dominic Cummings testimony