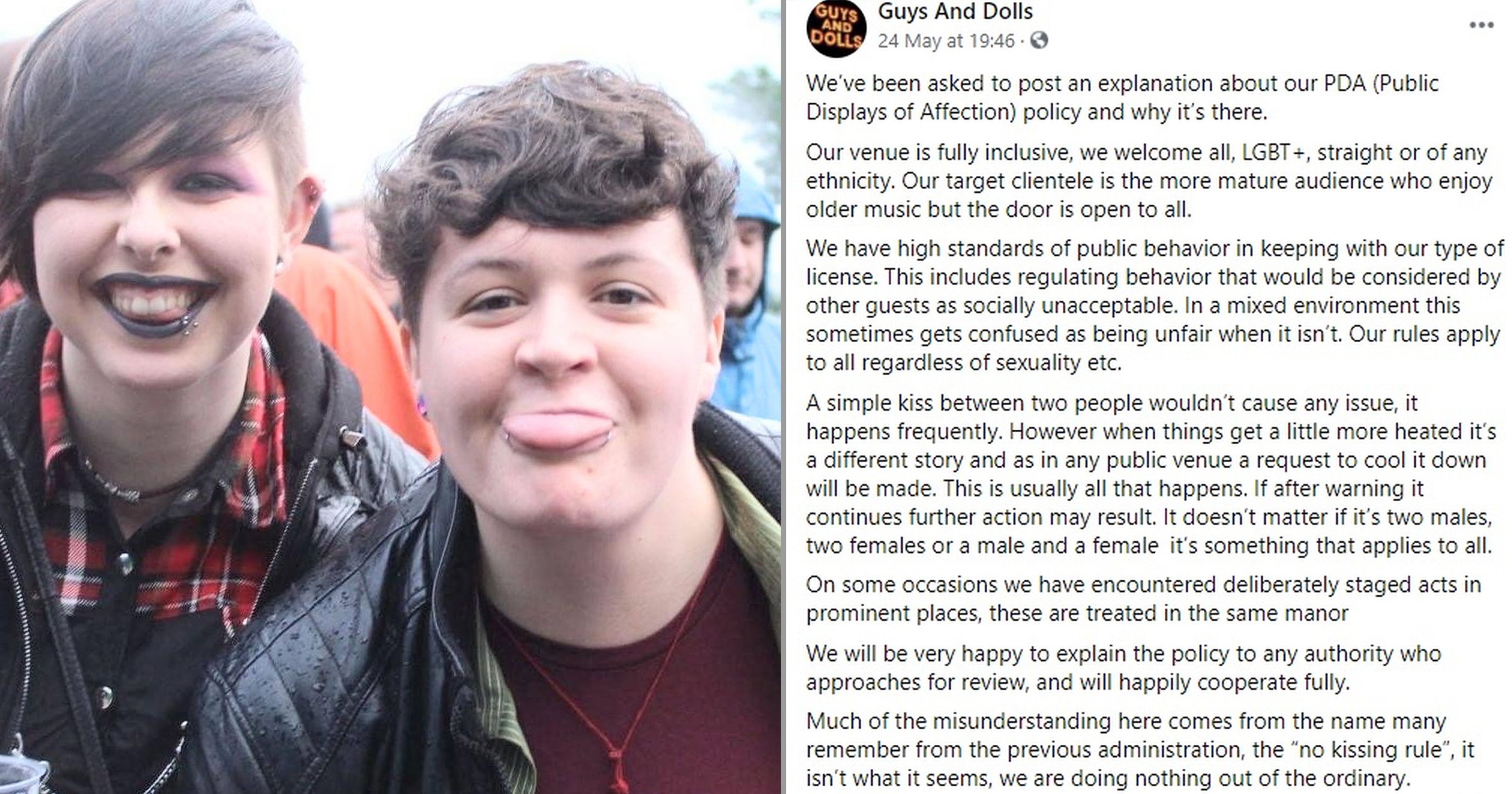 Guys and Dolls insisted it was an inclusive venue after the post sparked backlashA bar owner has denied homophobia after it banned ‘antisocial’ public displays of affection ‘aimed directly to disrupt our straight clientele’.
Richard Wernham, who runs Guys and Dolls in the Isle of Man, insisted the venue was ‘inclusive to all’ and that the rule applied to mixed-sex couples as well.
It comes after Facebook post outlining the bar’s strict PDA policy on May 23 appeared to imply that gay people were deliberately flouting it.
The post said:  ‘We are very pleased to welcome our new staff members and will now resume taking bookings.
‘All staff are now aware of our PDA (public displays of affection) policy and why we apply it. Also the manor [sic] it’s being used to undermine our community based function.
‘Any further attempts to deliberately provoke it will be regarded as antisocial behavior aimed directly to disrupt our straight clientele, many of whom have family members who are from LGBT+ groups.
‘We all support this approach and will enforce it. Welcome to equal rights and 2021.’
The policy sparked outrage from LGBT+ residents and patrons, who dubbed it ‘disgraceful’ and ‘blatantly homophobic’.
The Isle of Man’s main Pride organisation, Isle of Pride, also condemned the post, saying: ‘Recent Facebook comments from a local bar have demonstrated that while we may have come a long way on the journey to equality, there is still more work to do.

Gina Kinrade, 23 and Kara Varetto, 24, say they were told to stop kissing in the venue in 2017 (Picure: Kennedy News and Media)‘The ability to hold hands and kiss your partner in public is not restricted in law nor to being a specific gender or sexual orientation.’
Guys and Dolls later clarified that any ‘socially unacceptable’ amorous encounters between anyone would result in punters being kicked out, and that such a policy had been in place for 10 years.
A follow-up post explained: ‘We welcome all, LGBT+, straight or of any ethnicity. Our target clientele is the more mature audience who enjoy older music but the door is open to all.
‘We have high standards of public behavior in keeping with our type of license.This includes regulating behavior that would be considered by other guests as socially unacceptable.
‘In a mixed environment this sometimes gets confused as being unfair when it isn’t. Our rules apply to all regardless of sexuality etc.
‘A simple kiss between two people wouldn’t cause any issue, it happens frequently. However when things get a little more heated it’s a different story and as in any public venue a request to cool it down will be made. This is usually all that happens.’
The post said action would only be taken if people ignored the warnings.

The bar clarified its policy after being accused of homophobia (Picture: Kennedy News and Media)It stressed: ‘It doesn’t matter if it’s two males, two females or a male and a female, it’s something that applies to all.’
Kara Varetto, 24, claims they were told by bar staff to stop kissing their girlfriend Gina Kinrade, 23, on a Pride night in 2017.
Kara said: ‘I was just about to go to the bar and I kissed my partner briefly. One of the staff members very snappily said ‘stop that.’
‘We were both taken aback and we giggled, but then we realised she was being serious.
‘We went up to her to get an explanation, and she told us that we weren’t allowed to kiss on the premises, as it was their PDA rule.
‘When she said that, I remember looking around and seeing lots of couples kissing. I have a lot of friends who are straight and as far as I’m aware, they’ve never been chucked out of there for kissing.’
Kara, a support worker and Pride Youth representative, added: ‘I think the recent Facebook posts were very badly worded, and the way they’ve gone about enforcing this rule comes across as very homophobic.’
More: LGBTQ

Mr Wernhem said much of the misunderstanding comes from the name of the policy under the previous administration, the ‘no kissing rule’.
He insisted this isn’t the case and that the venue ‘is doing nothing out of the ordinary’ when it comes to banning overly amorous displays of affection.
He claimed that on some occasions, ‘we have encountered deliberately staged acts in prominent places’ and that anyone behaving like this is treated the same.
He condemned the social media criticism, saying: ‘I’ve been accused of being homophobic, which is absolutely ridiculous. There’s not a homophobic bone in my body.
‘We do cater for the island’s LGBT, but we also cater to an older audience, some of them straight, some of them gay.
‘We have a policy which dates before I was involved, initially called a ‘no-kissing’ rule. I changed its name to make it more understandable.
‘We don’t throw people out for it, unless they’re repeat offenders and it’s a deliberate act.
‘This [Facebook comments] is a malicious attack and seems highly orchestrated. We are an all-inclusive venue who welcomes all equally and not a gay bar as some infer.
‘It isn’t in any way discriminatory, it applies to all and is completely legal. It’s about keeping standards of behavior high and not about spoiling people’s fun.’
Get in touch with our news team by emailing us at webnews@metro.co.uk.
For more stories like this, check our news page.

See also  May Day: Are the shops open on bank holiday Monday?