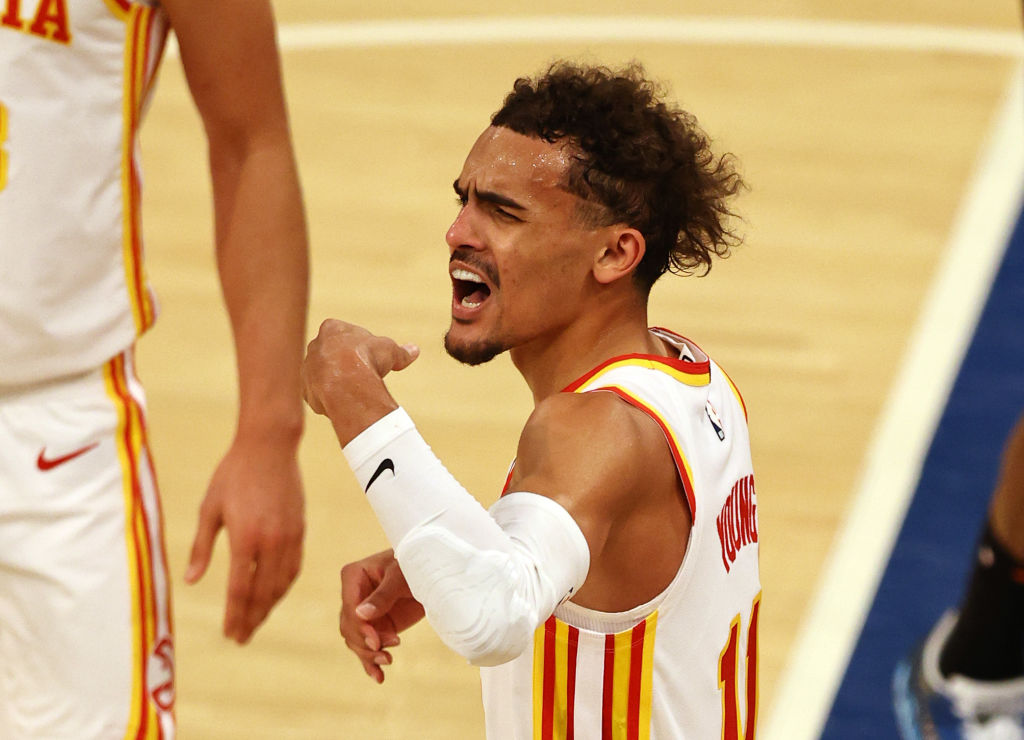 Three NBA stars have been subjected to unacceptable abuse this week (Pictures: NBA / Getty)Lakers star LeBron James says recent unsavoury incidents between NBA players and fans have ‘crossed a line’ but praised the league and the teams for responding so decisively.
There were a trio of unacceptable scenes during Wednesday’s Play-Off action beginning when a Philadelphia 76ers fan was ejected for throwing popcorn at Russell Westbrook as the Washington Wizards star left the court following an injury.
Later, it emerged that a New York Knicks fan had spat on Atlanta Hawks guard Trae Young, with the person in question banned indefinitely from Madison Square Garden.

Young was spat on during the Knicks’ win over Atlanta in Game Two (Picture: Getty)Following that, three Utah Jazz fans were all handed bans for repeatedly abusing Memphis Grizzlies star Ja Morant’s family in the stands, making sexually explicit and racist comments to his parents.
Wednesday proved to be one of the worst days for fan behaviour in NBA history and Lakers superstar LeBron slammed the actions of the supporters, though has been pleased with how quickly the incidents have been dealt with.
Asked if enough is being done to protect the players, James replied: ‘Yes absolutely. There’s been enough done to protect the players but we’ve got to continue to do that.
More: NBA
‘The NBA did a great job and also the respective teams, Philly, New York and also seeing Utah as well, protecting our players by banning individuals that had these instances that are not a part of cheering for your fans, or heckling players, or being as loud as you can.
‘All the heckling, that’s great. We don’t mind that. We hear the boos, we understand that.
‘Maybe there will be a couple of curse words here and there, we understand that as well. I actually love that, I’m absolutely okay with that.
‘But there is a line and I think we’re all grown and we all know what the line is and when you cross it.
‘So to see Russ get popcorn thrown on him leaving the game, to see Trae Young get spit on, and to hear about Ja’s family in the crowd in Utah, those are the things that are not going to represent our league, represent our players or represent these respective teams.
‘Those teams handled it with the upmost professionalism so kudos to the league, kudos to the Knicks, Jazz and Philly, and we want to continue to move forward.’