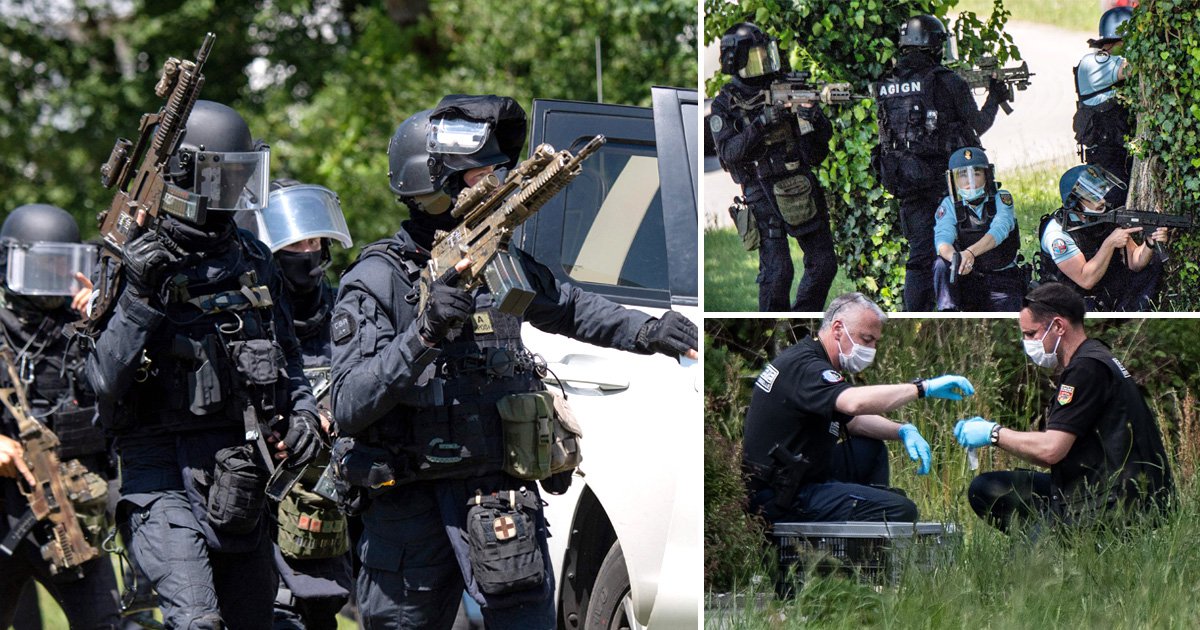 Some 250 officers were sent on a manhunt to find the escaped knifeman (Picture: AFP/Getty Images)A recently released French prisoner who was on a terror watchlist stabbed a policewoman yesterday before being gunned down by special forces.
The knifeman, named locally as Ndiaga Dieye, 39, launched his attack inside a police station in La Chappelle-sur-Erdre, near the city of Nantes, around 10am.
After slashing his first target several times with a knife, he grabbed her pistol and fled the scene.
Witnesses said they saw the him get into a VW Golf, but that he soon crashed the car, got out, and fled on foot.
Then, some 250 officers were sent on a manhunt to track him down, while local residents were told not to leave their homes and students were locked down inside schools and colleges.
Eventually police caught up with him and Dieye became locked in a battle, shooting one officer in the hand and another in the arm.
The National Gendarmerie Intervention Group moved in and exchanged fire with him and shot him in the abdomen.

Police became locked in a standoff with the attacker, hours after he stabbed an officer (Picture: AFP/Getty Images)

Two officers were shot in the hand and arm during the battle (Picture: AFP/Getty Images)‘The assailant was arrested while in a very serious condition caused by gunshot wounds, but he later died of his injuries,’ said an investigating source.
They added that the officer who was stabbed was rushed to hospital with a ‘very serious thigh injury which could be life threatening’. However Nantes’ public prosecutor said she is likely to pull through.
It is unclear how Dieye ended up inside the police station, but according to Le Parisien, he presented himself to officers claiming he had ‘a car problem.’
Dieye was released less than two months ago after serving time for a range of offences involving violence, and is through to have been radicalised in prison.
He was placed on an anti-terrorism watch list because of his ‘obsession with an extremist form of Islamism,’ said the investigating source.

The attacker was on a terror watchlist due to an ‘obsession with an extremist form of Islamism’, according to sources (Picture: AFP/Getty Images)More: Crime news

Dieye was also known to suffer from psychiatric problems, and had been diagnosed with schizophrenia the same year as his conversion.
It follows a series of similar attacks across France, including a female police worker who was killed by an Islamist knifeman in the Paris suburb of Rambouillet last month.
Friday’s attacks saw Dieye ‘slash the woman officer several times with a knife inside the police headquarters,’ according to a local police spokesman.
‘The man then grabbed the officer’s pistol and fled the scene,’ the spokesman said.
French Interior Minister Gérald Darmanin said he is going to the scene of the attack with state secretary for young people Sarah El Haïry.
Darmanin refused to describe the attack as terrorism, saying only that Dieye ‘wanted to attack police’. Police sources say the incident was not being treated as a terror attack.
The interior minister added that Dieye had been convicted of several ‘common law’ offences in the past but never for terrorism.
He confirmed that the attacker had converted to Islam inside prison in 2016 and had been reported to a radicalisation programme before his release earlier this year.
Get in touch with our news team by emailing us at webnews@metro.co.uk.
For more stories like this, check our news page.