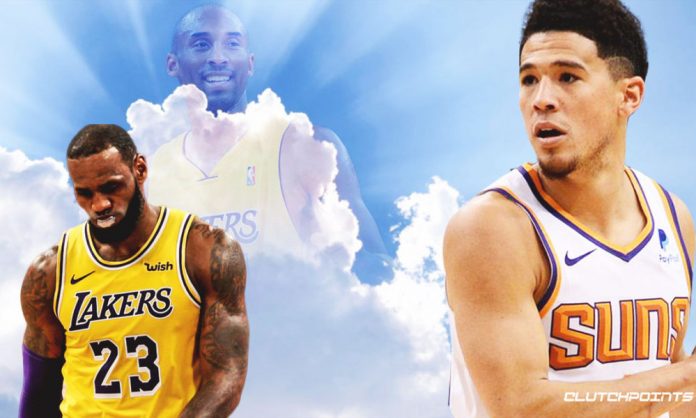 Somewhere up there, Kobe Bryant is smiling down on Devin Booker. Or maybe scowling. Because that’s what Kobe liked to do.

Whatever it may be, Booker sure made his late mentor proud after his career performance in Game 6 against the Los Angeles Lakers on Thursday. Just moments after their statement win, which made them advance to the second round of the NBA Playoffs, Booker took to Twitter to pay homage to the great Kobe.

Those exact words were Kobe’s advice to Booker when they first met. Since then, the 24-year-old Booker has lived up to the challenge. He has improved his game every season, becoming a two-time All-Star and now the undoubted cornerstone of the surging Suns.
Booker’s performance in Game 6 should be at the Louvre Museum. He exploded for 47 points, including 8-of-11 shooting from long distance, and added 11 rebounds. He joined Suns legend Charles Barkley as the only players in team history to score at least 45 points and grab at least 10 boards in the NBA Playoffs.
Booker started like a house on fire against the Lakers, burning them with one three-point fireball after another in the first quarter. Like Kobe in crucial games, the former Kentucky star had a killer mindset and set the tone early. The rest of the Suns followed Booker’s lead and the Lakers never recovered.
The Suns will face Nikola Jokic and the Denver Nuggets in the second round. It’s another difficult challenge. But for Devin Booker, it’s another chance to—wait for it—be legendary. And Kobe Bryant wouldn’t like it any other way.

Facebook
Twitter
Pinterest
WhatsApp
Previous articleArctic sea ice ‘thinning up to twice as fast’ as previously thought
Next articleAll that We Know About the Netflix Anime!!!