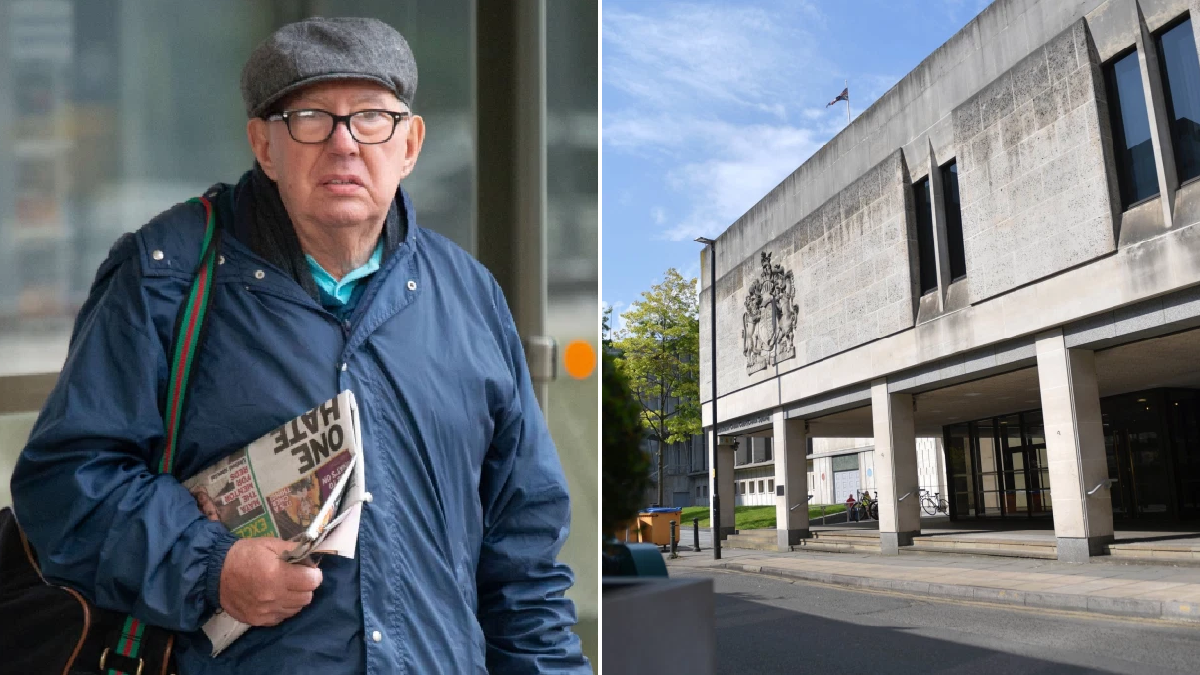 Mr Condron’s lawyer previously told a hearing that ‘medical treatment has been offered which will make this kind of conduct less likely as it will reduce testosterone levels’ (Picture: Cavendish/PA)A 77-year-old flasher who targeted his neighbours over an eight year period has been spared jail after a judge accepted his high sex drive had been lost to prostate cancer.
A court heard how Bernard Condron would wait in his favourite armchair for his victims to get out of bed, before jumping in front of his French windows to flash his genitals at them.
The pensioner, who suffers from dementia, flashed one woman several times while erect a day over a two-month period, Manchester Crown Court was told.
Another neighbour detailed how she would see him masturbating in his back garden while watching her getting ready to shower.
Despite repeated visits from police to the secluded street in Salford, plus warnings and court orders, Mr Condron, who lives alone, continued flashing for up to eight years.
In a statement one of the neighbours said: ‘This is making me unwell and every day when my husband leaves the house, I am worried about what this man is going to do next.

Bernard Condron, 77, who routinely exposed himself to neighbours whenever they opened their blinds, was handed a 12-month community order (Picture: Cavendish)‘I am concerned about my young grandchildren coming to the house. I would be devastated if they were to see this man with no trousers on.’
Mr Condron was facing a maximum two-year jail sentence after admitting three charges of indecent exposure and breaching a 2015 Sexual Harm Prevention Order which had banned him from being ‘visible to any person whilst naked’ for five years.
But he was instead given a 12 month community order after the court heard he had undergone chemotherapy and had also been left wheelchair bound after suffering a severe stroke.
The pensioner had previously undergone hormone treatment to reduce his testosterone levels in a bid to curb his behaviour.
He was also ordered to sign the Sex Offender Register for five years.
Sentencing Judge Alan Conrad QC said: ‘There indications bearing in mind his medication condition and the treatment he is receiving for prostate cancer that he has he now lost his sex drive which makes repetition of this upsetting behaviour highly unlikely.
‘There is also the fact he has suffered a severe stroke which has rendered communication difficult for him.’

Manchester Crown Court heard how Mr Condron masturbated while watching a nieghbour getting ready to shower (Picture: PA)The latest incidents occurred between October 2018 and April 2019 after Mr Condron had previously been reported to police for other flashing offences.
Prosecutor Nicholas Clarke said: ‘One of the neighbours said this defendant had been exposing his penis to her when she opened the blinds in the morning, as part of her normal routine.
‘She would see Bernard Condron behind a set of French doors holding his penis and she said over a two month period it happened almost everyday. Some days he would be masturbating and sometimes swinging from side to side.
‘She didn’t find this funny at all. She indicated she had since had to change her life around him.
‘She was aware because she brought her niece into her house, and was concerned that Condron was effectively waiting for her in the morning to open the blinds. He had been sitting in his chair and when the blinds were moved, he would jump up with his penis out for 20 minutes or so.
‘This happened almost everyday for two months. She called the police and he was arrested.
More: Crime news

‘He was bailed whilst a psychiatrist was instructed to deal with his dementia but he was arrested again over an incident on April 27 when another neighbour was in her bathroom and about to have a shower when she looked out and saw Bernard Condron stood outside with no trousers on.
‘He had only a brown T-shirt and he was stood with an erect penis and he was looking at her window whilst he was masturbating. This had been going on for sometime. She closed the blinds, had a shower and got dressed.
‘Afterwards, she came downstairs and confronted him shouting: “what do you think you’re doing”. But he didn’t reply and he closed his door and put the blinds down.
‘One of the women said she just wants him to stop. This was a persistent breach, almost daily over the course of two months.’
When police spoke to Mr Condron he responded: ‘Can you tell her I’m sorry. I can’t help it. I just get satisfaction from doing this.’
The court heard there had been no repetition of his behaviour since the latest incident.
At an earlier hearing defence counsel Julian Goode said: ‘He is a man of poor health mentally and physically. Medical treatment has been offered which will make this kind of conduct less likely as it will reduce testosterone levels, reduce sexual inclination and reduce the ability to obtain and maintain an erection.
‘The neighbours all want this to stop and he is very very concerned about his behaviour and does wish deeply that his actions will stop too.’
Get in touch with our news team by emailing us at webnews@metro.co.uk.
For more stories like this, check our news page.