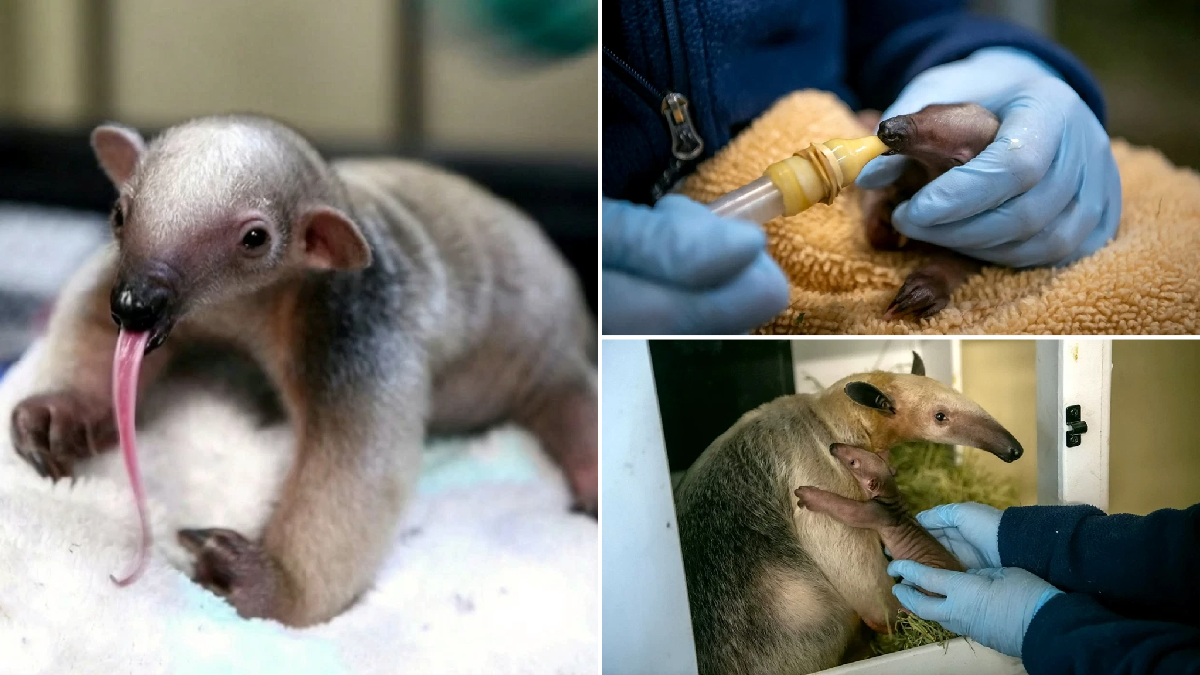 Liana the tamandua took her first steps at a zoo in Washington state after being nursed back to health from a respiratory illness she was born with (Pictures: SWNS)An adorable baby tamandua born with a respiratory disease took its first steps at a zoo after veterinarians nursed it back to health. The young tamandua, which is an anteater indigenous to Central and South America, could be seen in footage crawling and to her mother and sticking her long tongue out.
Liana, born on April 29, struggled with a respiratory illness that made her lose weight. Zookeepers at Point Defiance Zoo and Aquarium in Tacoma, Washington, had monitored the mother tamandua Terra throughout her pregnancy.
Handlers fed Terra whip cream from a tray in order to keep her still during the ultrasound tests.
With the care of zookeepers, Liana has doubled her weight over the past few weeks to 1.8 pounds. She has been eating a supplemental feed as well as antibiotics. Liana will be nursed like so for five to six months but zookeepers plan to try to feed her solid food including fruit and insects within the next two to three months.
The public will not be seeing Liana in the near future as she is also still being nursed by Terra. She will appear with Terra and her father Gonzo when she is strong and confident.
Liana was named after a woody climbing plant that dangles from trees, as tamanduas do since they are great at climbing.
Terra’s last pup, Chiquita, was born in 2018 and lived with her mother and father until the end of last year. Chiquita has moved to Smithsonian’s National Zoo and Conservation Biology Institute in Washington, DC.
Tamanduas have tongues that can grow up to 16 inches long.
For more stories like this, check our news page.
Get in touch with our news team by emailing us at webnews@metro.co.uk.