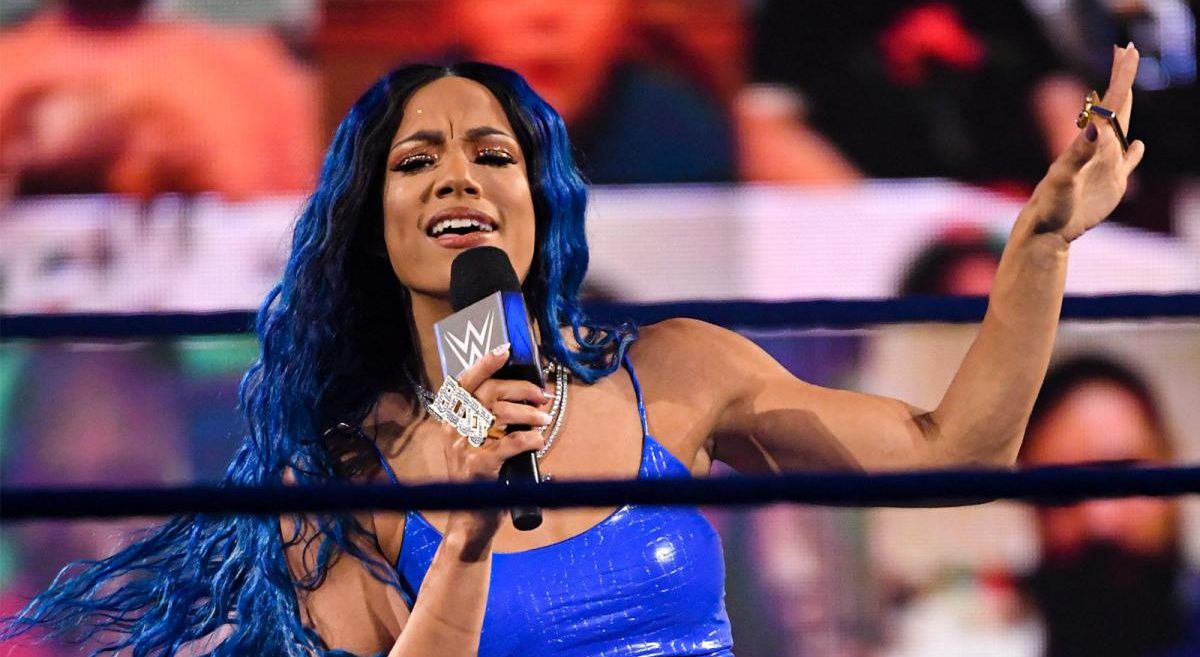 The Legit Boss wants an ‘easy’ payday (Photo: WWE)Sasha Banks has laid down the gauntlet for Floyd Mayweather after his fight with Logan Paul got a mixed reaction from WWE stars and fans.
There was no official winner in their exhibition bout last night with no judges present, and the YouTuber avoided a knockout defeat to last eight rounds with the five-weight world champion.
After the fight, Banks – a former SmackDown Women’s Champion who also starred in The Mandalorian season two – quipped: ‘I want to fight @FloydMayweather next! #EasyMoney #Bankonit (sic)’
She’s not the only one, as Omos replied with crying laughing emojis and wrote: ‘Right behind sis’
And before the clash took place, AEW’s Chris Jericho had teased: ‘Good luck tonight @FloydMayweather! After you whip @LoganPaul’s ass, I’ll be waiting for you… (sic)’
Other stars couldn’t resist a jab at the fight, with a couple even suggesting the bout was a ‘work’ – which is a term for ‘scripted’ in the world of wrestling.
AEW star Jade Cargill posted a eyeroll emoji, adding: ‘This fight is a work’
And WWE Hall of Famer Mark Henry – who recently joined Jade in the rival promotion – seemed to agree as he simply replied: ‘Yep!’
T-Bar and Mace – former members of RETRIBUTION – also sarcastically chipped in, as the former used it as a way to promote their match tonight on WWE Raw against Lucha House Party, RK-Bro, The New Day and The Viking Raiders.

Some WWE and AEW stars were less than impressed (Picture: AP)He teased: ‘If you want to see some guys actually hit each other check out this match tomorrow night on #WWERaw.’
His tag team partner savagely added: ‘I was actually hoping to hug these guys for 8 rounds.’
Neither Mayweather nor Logan are strangers to the world of sports entertainment, as the boxer faced The Big Show back at WrestleMania 24 in 2008,, while the YouTuber appeared at this year’s event as part of a storyline with Kevin Owens and Sami Zayn.
More: Boxing

After Sunday’s fight, Zayn himself appeared to take credit for Logan’s performance.
He joked: ‘I’ll say this, @LoganPaul no doubt worked his ass off and proved a lot of people wrong, but if he never meets Sami Zayn, he never realigns his perspective, and no chance he goes 8 rounds with Floyd Mayweather.
‘I’m glad to have played my part in this historic bout.’
If you’ve got a celebrity story, video or pictures get in touch with the Metro.co.uk entertainment team by emailing us celebtips@metro.co.uk, calling 020 3615 2145 or by visiting our Submit Stuff page – we’d love to hear from you.
For more stories like this, check our entertainment page.
Follow Metro.co.uk Entertainment on Twitter and Facebook for the latest celeb and entertainment updates. You can now also get Metro.co.uk articles sent straight to your device. Sign up for our daily push alerts here.