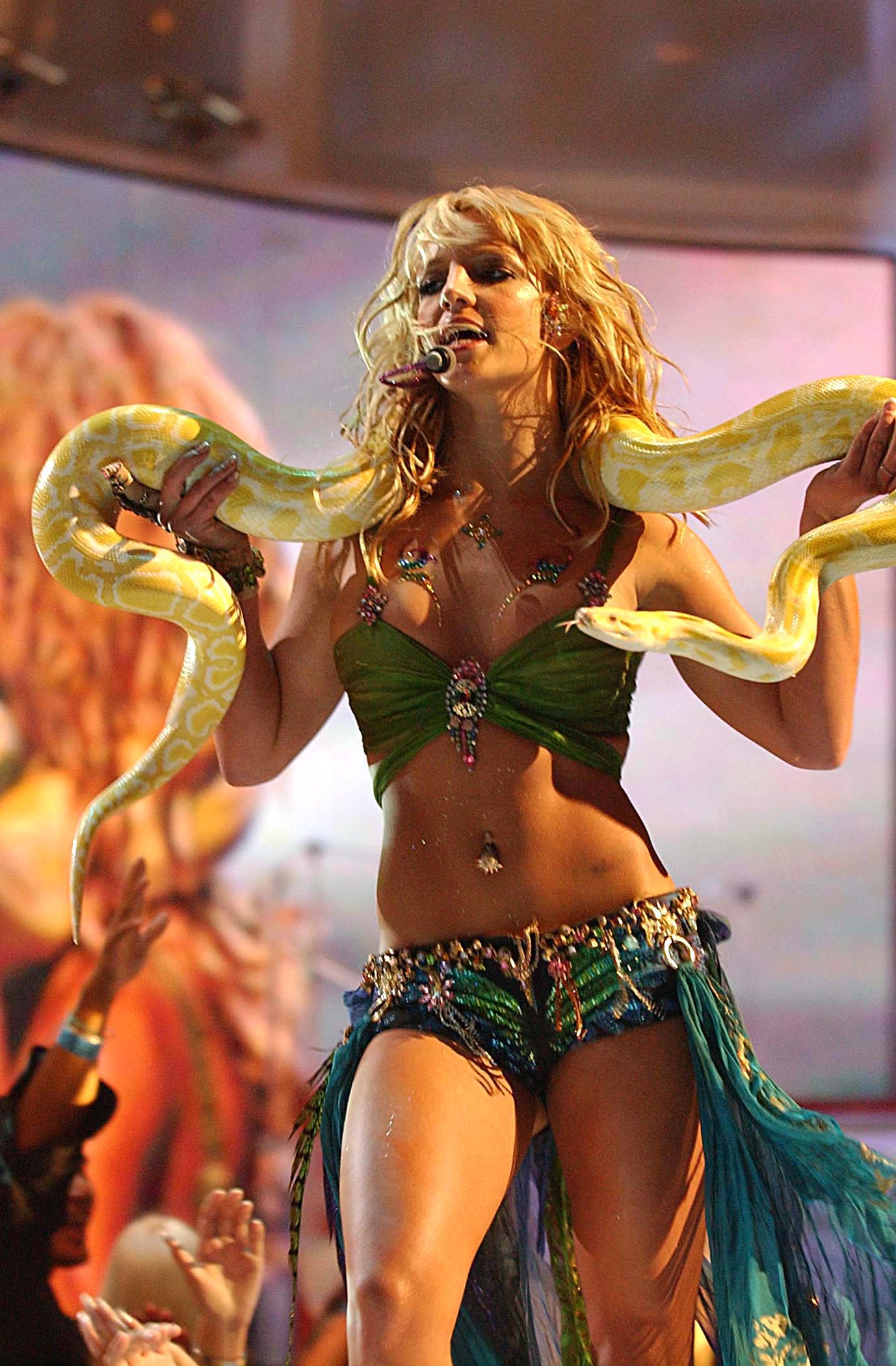 Britney Spears honoured her VMAs performance in an interesting way (Picture: @britneyspears, Instagram)Britney Spears is reliving her iconic MTV Video Music Awards performance from almost 20 years ago – by dressing up as a snake like the one that joined her on-stage.
The Toxic singer took a trip down memory lane and stopped at her mesmerising performance of dancefloor banger I’m A Slave 4 U on September 6, 2001.
With the 20th anniversary fast approaching, Britney paid homage to one of the best live performances of her career in an interesting way.
It’s hard to forget but Britney shared the stage with a yellow Burmese python, nicknamed Banana, resting on her shoulders while strutting around in a green bra and the tiniest shorts we ever did see.
So on Monday, the pop star shared an Instagram post showing her dressed up in a green reptile print jumpsuit and pulling a series of striking poses.
‘I held a snake at the @VMAs one time but decided to go ahead 20 years later and become the motherf*****g snake myself 🐍🐍🐍 !!!!’ Britney captioned the image.
‘And since tricks are for kids you tricky little s***s … who knows what color snake I will be tomorrow 😳🤔😏 !!!!??? Stay safe folks and watch out for the 🐍🐍🐍🤭🤭🤭 !!!!!’

Fans were confused by her referring to herself as a snake (Picture: @britneyspears, Instagram)

Britney’s performance of Slave 4 U will forever remain iconic (Picture: FilmMagic)Her followers were a little confused by the post with one stunned fan commenting: ‘Okay what the actual?’
‘It’s Britney’s world and we’re just living in it,’ another declared.
Referring to the python from the VMAs performance, a follower joked: ‘Banana could never.’
‘Banana 🐍 is shaking right now,’ another agreed.
One particularly concerned supporter said: ‘Hope someone’s keepin the snakes away from you.’
Another wrote in a similar fashion: ‘What’s with all the swearing these days… Britney never had a vulgar language like this.’

There’s been a heavy focus over Britney’s wellbeing in recent months following the release of the documentary Framing Britney Spears.
It explored the singer’s meteoric rise to fame, the sexism she faced in the music industry at a young age and her controversial and ongoing conservatorship.
However, the pop star recently shut down the scrutiny of her life and wrote in an Instagram post: ‘2021 is definitely way better than 2020 but I never knew it was gonna be like THIS 😳😳😳 !!!! So many documentaries about me this year with other people’s takes on my life … what can I say … I’m deeply flattered !!!!
More: US Showbiz news

‘These documentaries are so hypocritical … they criticise the media and then do the same thing 🤔🤔🤔????? Damn … I don’t know y’all but I’m thrilled to remind you all that although I’ve had some pretty tough times in my life … I’ve had waaaayyyy more amazing times in my life and unfortunately my friends … I think the world is more interested in the negative 🤷🏼‍♀️🤷🏼‍♀️🤷🏼‍♀️ !!!!’
She added: ‘‘I mean … isn’t this supposed to be a business and society about THE FUTURE 🤧🤧🤧 ???? Why highlight the most negative and traumatising times in my life from forever ago ???? I mean DAMN.’
If you’ve got a celebrity story, video or pictures get in touch with the Metro.co.uk entertainment team by emailing us celebtips@metro.co.uk, calling 020 3615 2145 or by visiting our Submit Stuff page – we’d love to hear from you.
For more stories like this, check our entertainment page.
Follow Metro.co.uk Entertainment on Twitter and Facebook for the latest celeb and entertainment updates. You can now also get Metro.co.uk articles sent straight to your device. Sign up for our daily push alerts here.

MORE : Britney Spears gushes over ‘genius’ Princess Diana who was ‘oblivious to her power’ in powerful tribute

MORE : Britney Spears blasts ‘negative’ films about her ‘traumatising’ past as she shouts out Paris Hilton in carefree dance video