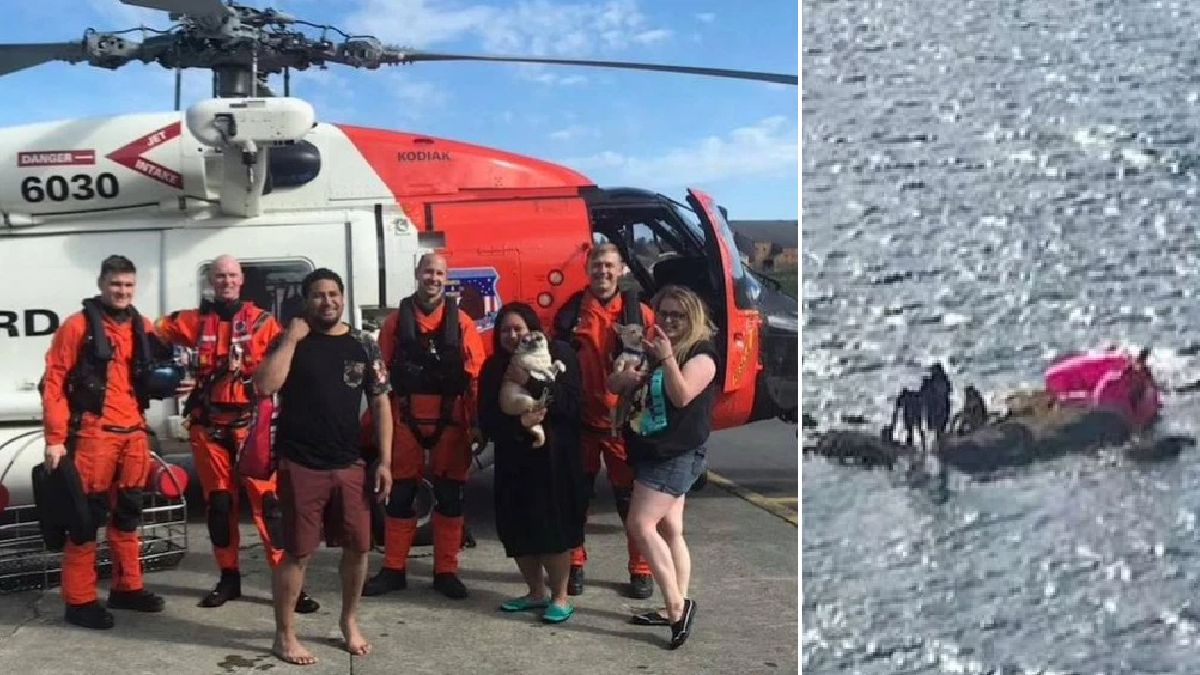 A woman decided to celebrate her 30th birthday by getting on a 10-foot inflatable pink flamingo float with two friends and their two dogs in a shallow area of an Alaska bay. But Hollie Spence’s big birthday did not go as she planned.
It was a sunny day with clear skies on Saturday when Spence climbed on the flamingo float along with her roommate Lepa Sega, Lepa’s brother Nation Sega. Spence, however, noted that it was also windy.
‘If we get too far out, we notice right away and pull it back,’ Spence said.
The group had floated on the giant flamingo last year without issues.
This time, they packed extra clothes, blankets, snacks and non-alcoholic beverages and were set to relax on the float as if it was a couch. They did not pack paddles or life jackets.
The wind and current quickly pushed Spence and her crew out of the shallow area of White Sands Beach in Kodiak and into Monashka Bay.
‘It was a little windy but I never thought in a million years we would be drug out so fast and so far,’ Spence said.
The flamingo float drifted for about an hour before coming to a stop at rocks on the other side of the bay.
Alaska State Troopers and the US Coast Guard were called to the rescue but could not boat in due to the rough conditions. Instead, they used a helicopter to airlift Spence and her group.
Spence said ‘it was a complete freak accident and we had to be rescued’.
Paramedics at the Coast Guard station checked Spence and her friends for injuries, which they luckily did not have. Spence suffered some scrapes from rocks but no one needed to be hospitalized.
Spence has now been convinced against celebrating her birthday on the flamingo float – or any occasion for that matter.
‘It was the scariest day of my life,’ Spence said. ‘I don’t think I’ll ever do something like this again.’
One of the rescuers joked that Spence would never forget her 30th birthday in her life.
For more stories like this, check our news page.
Get in touch with our news team by emailing us at webnews@metro.co.uk.