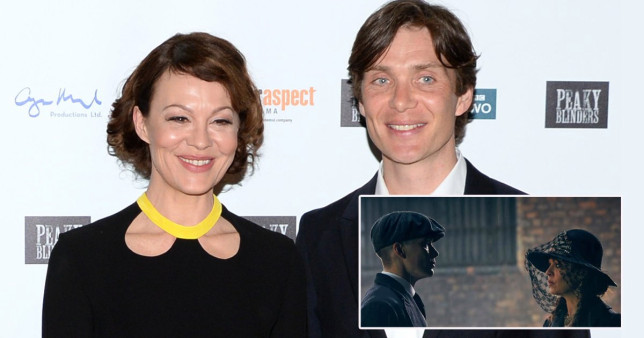 Cillian ‘desperately sad’ to film Peaky Blinders without Helen McCrory (BBC/REX)Cillian Murphy has revealed the entire Peaky Blinders cast is ‘desperately sad’ to film the show’s final season without Helen McCrory.
The esteemed actress, who played Aunt Polly in the BBC series, died in April at the age of 52 following a private battle with cancer.
Helen’s husband, Damian Lewis, confirmed her death in a heartfelt statement shared on Twitter, explaining that she died at home.
Cillian, who plays lead Tommy Shelby in the award-winning series, has spoken candidly about what filming’s been like without Helen’s presence.
‘It’s desperately sad. Sad for all of us who knew her, and the people who were close to her and the fans,’ he told Irish radio station Today FM.
‘She was like the matriarch of Peaky Blinders, and the person I was closest to. The Polly and Tommy scenes were some of my favourite scenes in the show. It’s desperately sad. We’re all still trying to come to terms with it.’

The duo had a close friendship and working relationship (Picture: Shutterstock)

Helen had an electric presence on the show (Picture: BBC)This isn’t the first time the 45-year-old has spoken out about the loss of his friend and co-star.
Chatting to The Guardian, the actor reflected on his tight-knit friendship with Helen.
‘Oh, man. She was my closest colleague on Peaky, and one of the finest actors I’ve ever worked opposite,’ he said.
‘Any material, any scene… she made it special. She could do power and vulnerability, one after the other. She was just so cool and fun, and has such compassion for everyone she met.
‘I was kind of in awe about how she lived her life – the way she balanced her work and her family so beautifully.’

Damian shared the news of her death via Twitter (Picture: Getty Images)The actor had previously paid tribute to Helen shortly after the news of her death was announced.
He wrote on Twitter: ‘I am broken-hearted to lose such a dear friend. Helen was a beautiful, caring, funny, compassionate human being. She was also a gifted actor – fearless and magnificent.
More: Peaky Blinders

‘She elevated and made humane every scene, every character she played. It was a privilege to have worked with this brilliant woman, to have shared so many laughs over the years.
‘I will dearly miss my pal. My love and thoughts are with Damian [Lewis; husband] and her family.’
Peaky Blinders is available to stream on BBC iPlayer.
If you’ve got a celebrity story, video or pictures get in touch with the Metro.co.uk entertainment team by emailing us celebtips@metro.co.uk, calling 020 3615 2145 or by visiting our Submit Stuff page – we’d love to hear from you.
For more stories like this, check our entertainment page.
Follow Metro.co.uk Entertainment on Twitter and Facebook for the latest celeb and entertainment updates. You can now also get Metro.co.uk articles sent straight to your device. Sign up for our daily push alerts here.

MORE : Peaky Blinders wraps up filming final series and the end is nigh