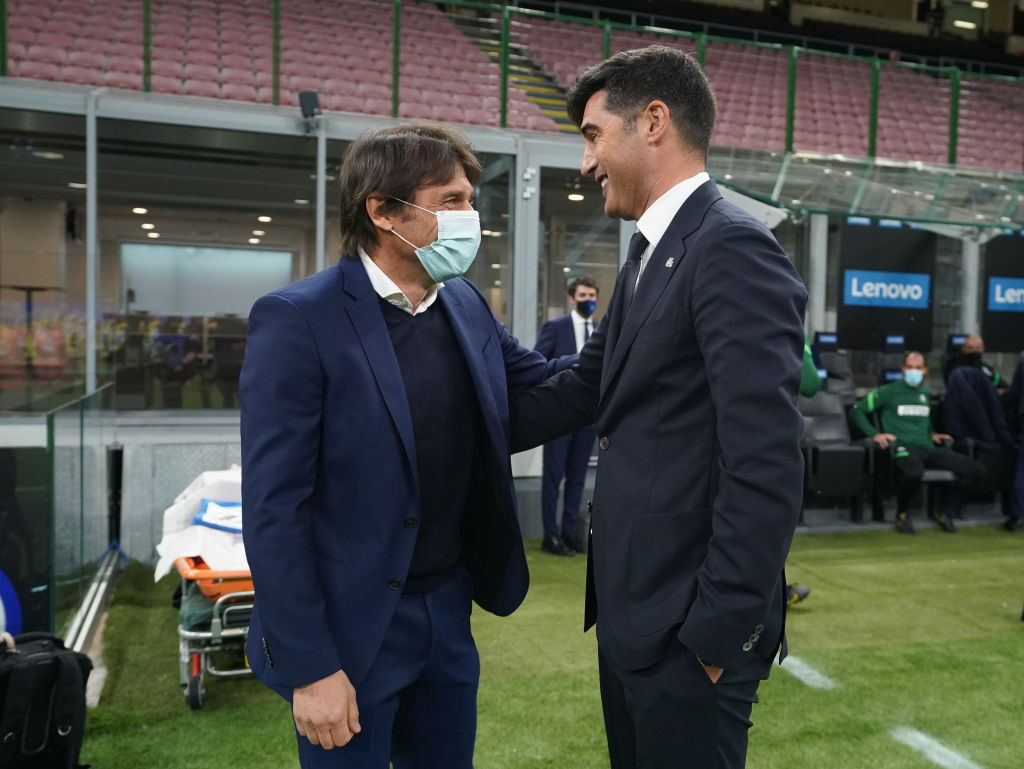 The Portuguese coach is set to fly to London in the coming days (Picture: Getty Images)Former Roma coach Paulo Fonseca has agreed a two-year contract with Tottenham as the north Londoners finally close in on a successor for Jose Mourinho after almost two months of searching.
Spurs dismissed the self-proclaimed Special One in mid-April but have been repeatedly frustrated in their search for a replacement, with Bayern Munich swooping in to land original top target Julian Nagelsmann.
Tottenham chairman Daniel Levy then tried to lure Mauricio Pochettino back before flirting with Antonio Conte, though ultimately Spurs have settled for a manager way down their wishlist.

Spurs turned to Fonseca after Conte rejected their approach (Picture: Getty)According to The Telegraph, Tottenham’s move for Fonseca has been led by incoming sporting director Fabio Paratici and is only awaiting final sign-off from Levy, who is in the Bahamas with club owner Joe Lewis.
The announcement is only pending paperwork and Tottenham hope to be able to present their new manager, as well as Paratici, by early next week at the latest with Fonseca set to fly to London this weekend.
Fonseca’s contract includes the option for a third year, until 2024, and he is believed to be earning dramatically less than Mourinho.
Former Juventus chief Paratici’s first job since agreeing to join Spurs – which has not even been officially announced yet – was to find a new manager and he knows Fonseca well from his time in Serie A with Roma.
More: Premier League

The Portuguese coach left the club after two mixed years, with injuries derailing an initially promising second season, and his contract was not renewed as Roma’s owners instead opted to hire Mourinho.
Fonseca is considered a much better fit for the type of manager Tottenham had outlined at the start of their managerial search, playing very attacking, free-flowing football and developing young players.
Writing at the end of the season, Levy had said: ‘We are acutely aware of the need to select someone whose values reflect those of our great club and return to playing football with the style for which we are known – free-flowing, attacking and entertaining – whilst continuing to embrace our desire to see young players flourish from our academy alongside experienced talent.’

Fonseca attended a press conference as Zorro after Shakhtar beat Man City (Picture: Getty)Spurs feel Fonseca ticks all those boxes, with his three years in charge of Shakhtar Donetsk – when he won the double each season and beat Manchester City in the Champions League – particularly impressive.
Interestingly, Fonseca will not be working with the same backroom team he has used for much of his coaching career, with long-time assistant Nuno Campos revealing they were parting ways after 15 years as he looks to move into management himself.
Once Fonseca is installed, the 48-year-old is expected to oversee a dramatic changing of the guard at Spurs with a number of players on the chopping block.