Demon Throttle is a physical only Switch game from Devolver Digital 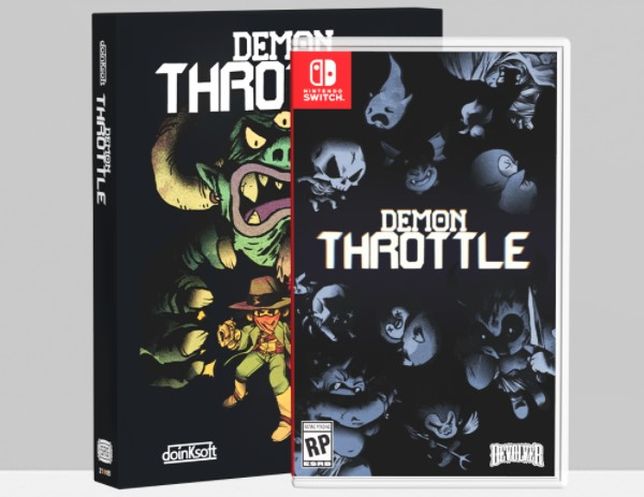 Demon Throttle – taking old school to the next level (pic: Special Reserve Games)Devolver Digital have hosted their annual E3 showcase and one of the most interesting is a game that will never be released digitally.
Digital downloads became the most common way to buy video games a long time ago, with many indie titles now no longer getting a physical release. But this is the first time in a long while that a game has got a physical release by no digital one.
Demon Throttle looks to be a cool top-down action adventure that looks like a NES game, with homages to The Legend Of Zelda and other classic games from that era. It’s by Doinksoft, who are best known for retro Metroidvania Gato Roboto.
It’s the fact that you can’t download it that’s catching people’s attention though, with the game only available via Special Reserve (no not the old UK mail order company). It’s already been so popular the website is being hammered, so it may not be the last game to try a similar trick.
Devolver Digital showcased eight other games and it’s quite an eclectic mix, including old school first person shooter sequel Shadow Warriors 3 and the considerably classier samurai adventure Trek To Yomi – although both games are by Polish studio Flying Wild Hog.
Wizard With A Gun may be our favourite name for a new video game in a long while and is acooperative sandbox survival game, that looks a bit like a more action-orientated version of Don’t Starve. Meanwhile, Terra Nil is a reverse city builder where you have to turn a ecologically ruined wasteland into a pristine paradise.
Inscryption is the new game from the creator of Pony Island, so that goes instantly on the ‘of interest’ list, even though we have no idea what’s going on in the trailer other than it’s some kind of collectible card game.

See also  European Super League: Why has it been created? Which clubs have signed up?

Devolver Tumble Time is pretty obviously a puzzle game, although it has the twist that it’s mobile only and features characters from multiple Devolver games – so it’s like Smash Bros. but for puzzlers.
Death’s Door has some very nice isometric graphics and involves you playing a crow collecting the souls of the dead, while finally Phantom Abyss is an asynchronous multiplayer game that looks a bit like a first person Spelunky.
More: Games news

The twist is though that you only have one chance to tomb raid a temple, with no chance to go back if you fail. It enters early access on June 22, if you like the look of it.
It’s only 30 minutes long, so we advise watching the whole Devolver Digital showcase, especially as it’s considerably less pompous and self-congratulatory than the usual ones you get at E3.

MORE : Summer Game Fest: every indie game shown at Day Of The Devs