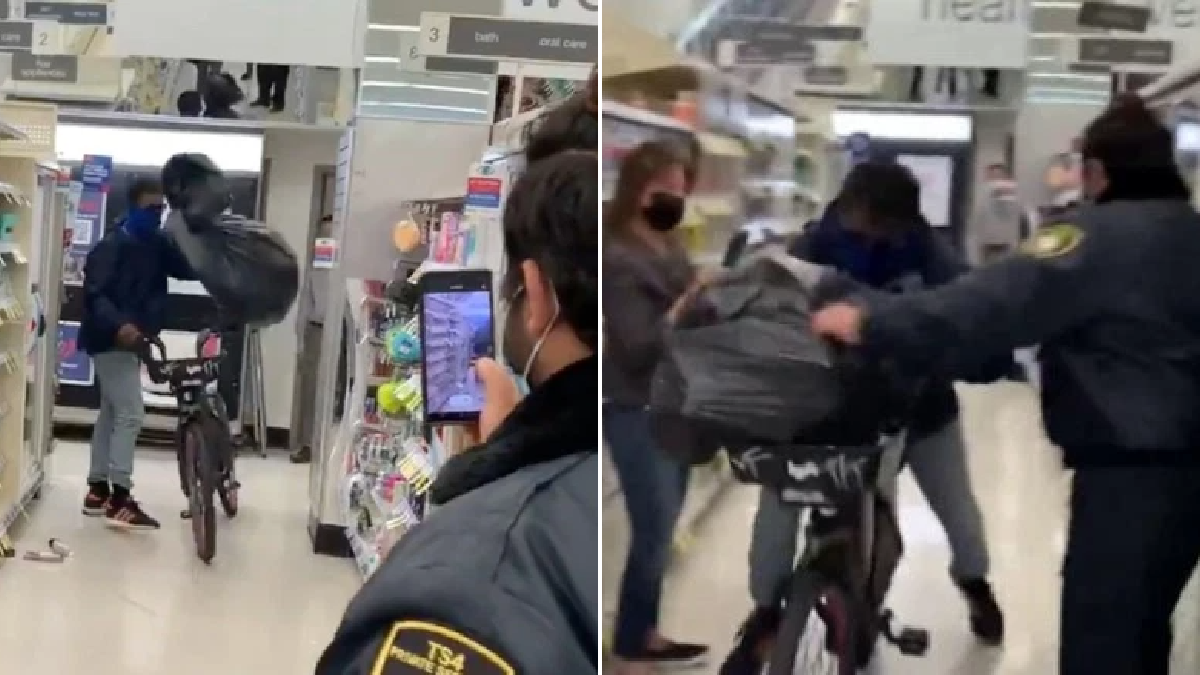 A man stuffed a garbage bag with items from a Walgreens shelf and rode his bike down the aisle past three people recording the theft in progress on their cell phones. That included a security guard who tried – and failed – to grab the bag.
Cell phone footage caught the shocking moment that the man slowly and calmly finished packing the items, aware that a woman and a man with a security jacket were filming him. The thief, who had a cloth wrapped around his face and wore sunglasses, then hopped onto a Lyft bike and rode in between the man and woman.
The male security guard could be seen reaching for the garbage bag that the suspect placed on top of his bike basket. But seconds later, the footage showed the thief had made it past the guard, holding the bag at his side, and biked out through the doors of the Walgreens in San Francisco, California.
‘That’s when he sort of ran into me with his bicycle,’ said ABC7 News reporter Lyanne Melendez, who was shopping at the store in the Hayes Valley neighborhood and recorded the incident with her cell phone.

A man stole a garbage bag full of items as several people recorded the crime on their cell phones and biked past a security guard (Pictures: Twitter)Melendez shared her video on Twitter along with the hashtag #NoConsequences. She was not working that day, and was not injured.
‘I live in this city and I see this constantly,’ Melendez said. ‘Not only Walgreens, but cars, and my garage door has been broken into twice.’
Melendez said she has witnessed three shoplifting sprees in plain sight at different Walgreens in San Francisco over the past year-and-a-half.
‘At what point do we say enough is enough, we want our city back,’ she said.
San Francisco Supervisor Asha Safai convened a hearing on organized retail theft in the city last month and called for a more coordinated response from police and the district attorney’s office.
‘It might even involve a more aggressive effort when it comes to surveillance cameras, because you see the same individual hitting multiple locations,’ Safai said. ‘Then you can begin to have deeper conversation about bringing multiple charges, or aggregate charges against that individual and really start to break this up.’
For more stories like this, check our news page.
Get in touch with our news team by emailing us at webnews@metro.co.uk.