Stephen Colbert emotional as audience returns to show after 15 months 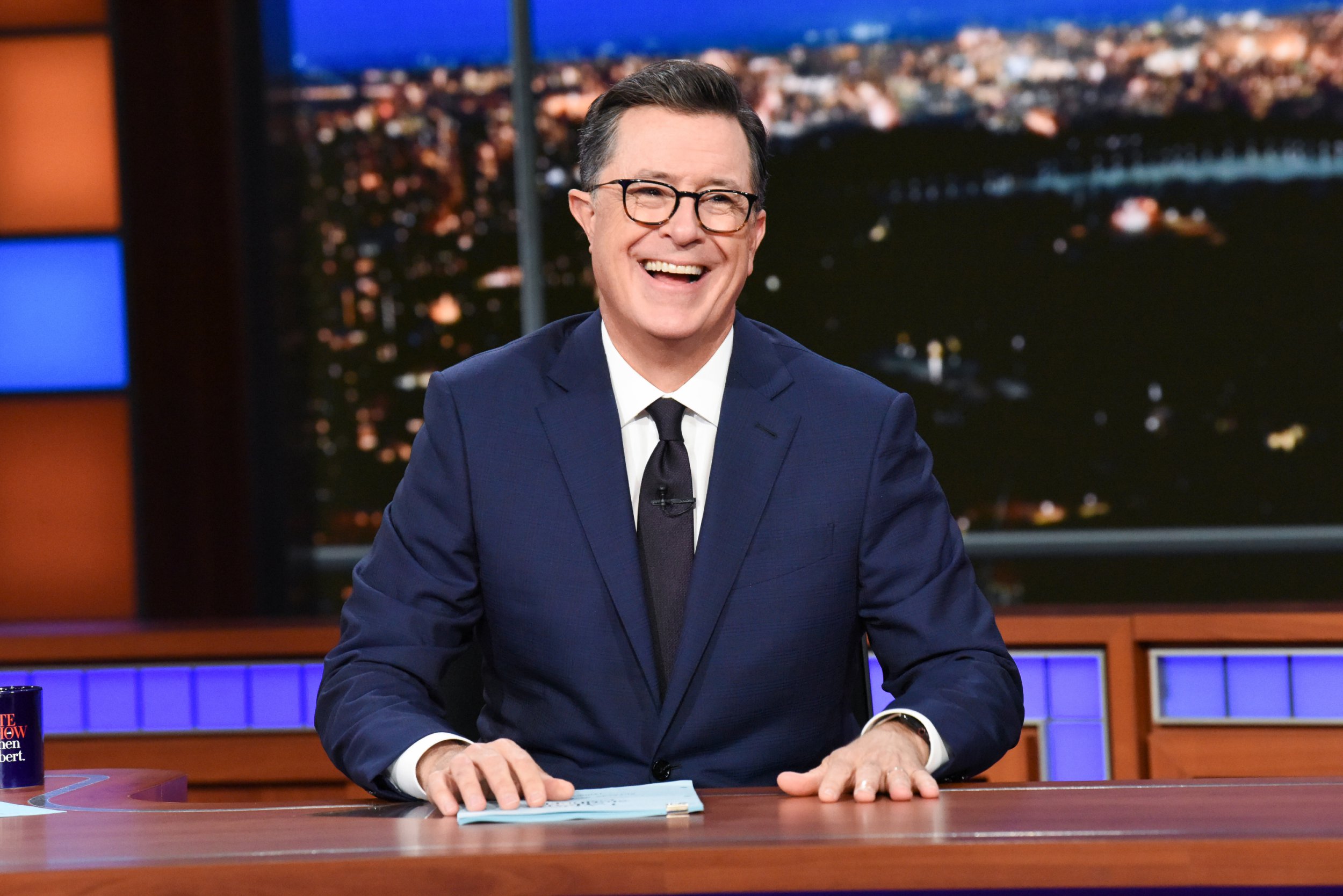 Colbert is out of the storage cupboard (Picture: Scott Kowalchyk/CBS via Getty Images)In scenes that would bring a tear to anyone’s eye, Stephen Colbert got emotional as he welcomed back a live audience for the first time in 15 months.
We’re starting to see the return of actual people to sets now, and the host of The Late Show had been filming his pandemic-era episodes from a storage room after the world was plunged into lockdown in March last year, but that seemed to make the return to his old set all the sweeter on Monday.
Greeting a screaming and cheering audience this week, Stephen was overcome with emotion as he embraced bandleader and musical director Jon Batiste and reacted to the raucous applause from those who’d gathered to watch this taping.
The audience was made up of vaccinated punters keen to herald the return to live crowds once more in the Ed Sullivan Theater which can seat over 400. Masks were optional as they were heard cheering ‘Ste-phen! Ste-phen’ while the host attempted to quiet them down for his cold open.
As the host proceeded to start his programme, he adjusted his glasses and looked at the ground as he really took in the moment and regained his composure.
He said: ‘So how you been? It’s great to be back. We never really left. But we certainly weren’t here. This is a slightly different energy than the converted storage room eight floors above us, as lovely as that was.’
Joking he’d replaced the ‘applause’ signs for the audience with ones that read: ‘Remember how to applaud,’ he added: ‘I don’t know if I even remember how to pander to the most beautiful crowd in the world.’
Those watching also couldn’t help but notice how raw and powerful the intro was, with BBC’s Scott Bryan sharing the clip on Twitter and adding: ‘Stephen Colbert returned with a (vaccinated) audience for the first time in 15 months last night and it’s really quite emotional.’
Another wrote: ‘I just got stupid emotional seeing Stephen Colbert doing his first monologue to a fully vaccinated audience back in the Ed Sullivan theatre.’
Oh the emotions were high, dear friends.

Did I almost tear up and applaud when @StephenAtHome walked out to a full crowd? No, of course not. Yes, yes I did.— Bob Lewis (@BobLewisAmerica) June 15, 2021

Not me CRYING watching @StephenAtHome dance with a lady in his audience because heâs back in the theater. Thatâs my TV dad yâall— delilah (@firsttimerenter) June 15, 2021

Just a guy crying that Stephen Colbert has a live audience in a theatreâ¦.— Geoff Wright (@GeoffLWright) June 15, 2021

Stephen was joined comedian Dana Carvey who appeared as President Joe Biden, while former Daily Show host Jon Stewart dropped by and exclaimed: ‘There’s nothing I wanted to do more than breathe everyone’s air.’
He also brought out his wife Evelyn McGee-Colbert, who, amid the pandemic, was Stephen’s only live audience member.
She told the buzzing crowd: ‘Audience, he’s all yours now. And don’t forget to laugh because he really needs it.’
More: US TV news

The Late Show host had been keeping the cogs turning over the past year, sharing his responses to not only the pandemic but also Donald Trump’s ousting, Derek Chauvin’s guilty verdict as well as Piers Morgan’s row with Meghan Markle.
At one stage he even brought us his programme from a bubble bath as he insisted the show would go on albeit without his usual desk, band and audience.

MORE : Tom Allen had childhood crush on Baddiel and Skinner because of the football kits: ‘I’ve not told them this yet’

MORE : Lin-Manuel Miranda ‘truly sorry’ for lack of Afro-Latinos in In The Heights amid colourism row