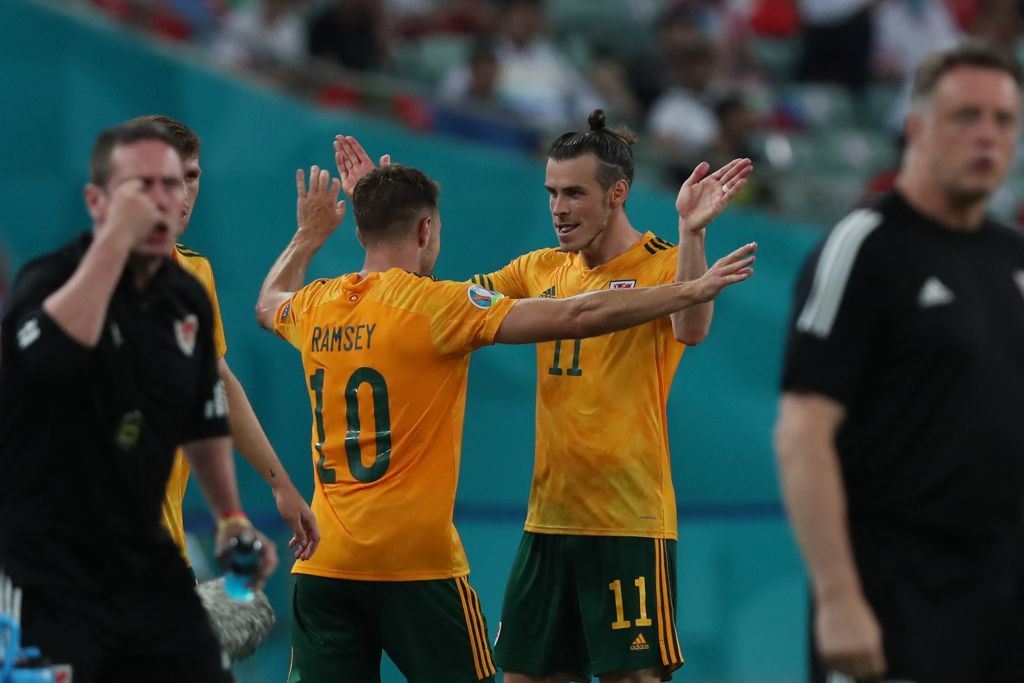 Gareth Bale missed a penalty during Wales’ 2-0 win over Turkey (Picture: Getty)Aaron Ramsey joked he might be back on penalty duty before too long following Gareth Bale’s astonishing miss during Wales’ 2-0 win over Turkey.
The Real Madrid star, who spent last season on loan at Tottenham, delivered a man of the match performance as Robert Page’s side all but guaranteed themselves a place in the last 16 after a thoroughly deserved victory in Baku.
Bale created Ramsey’s opener with a sensational lofted through ball and made the game clinching goal in injury-time after a superb slaloming run culminated in him providing Connor Roberts with a simple chance.
Thankfully, Bale’s 61st minute spot kick nightmare – the first penalty to miss the target entirely at a European Championship finals match in 21 years – wasn’t costly, and Ramsey was impressed with the way Wales maintained their composure after what could have been a significant setback.
He said: ‘The penalty was a big moment but we didn’t panic, we didn’t leave anything out there, and we worked hard from each other.
‘He’s tried to wobble it into the top bins, maybe I’ll get back on them (penalties) now.’

Aaron Ramsey and Gareth Bale were superb during Wales’ Euro 2020 win over Turkey (Picture: Getty)Page, meanwhile, coaching the side in the absence of Ryan Giggs, was full of praise for Bale after he refused to allow the penalty miss to impact on his performance.
‘What Gareth really showed was character, everyone makes mistakes, but he got on with it and was man of the match,’ he said.
“He played a massive part as a captain, as was Aaron Ramsey who I thought was outstanding tonight.’
And Bale, who dragged Wales almost single-handedly to the semi-final stage five years ago, is confident that with four points amassed from two games his side are headed for the knockout stages.
More: Arsenal FC

He said: ‘I’m absolutely delighted with the win, we fought hard, worked our socks off, yes I missed a penalty but I feel I showed good character to keep going.
‘That second goal at the end was the icing on the cake.
‘Aaron [Ramsey] got in a few times, we’ve always linked up well, it was important to get the victory today.
‘You’d like to think that [four points] would be enough, we will have to wait and see, if you’d offered us four points at the start we would have bitten your hand off.’