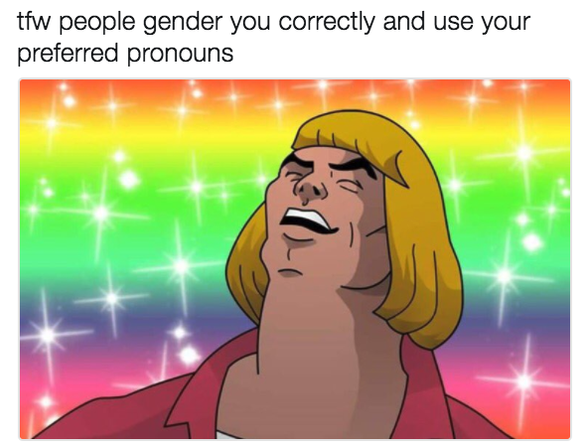 If you can’t laugh at yourself, how in the hell are you going to laugh at anybody else? (Picture: Getty)Pride Week is being marked by Metro.co.uk community through a series of articles celebrating the LGBT+ community.
The fight for equality and justice can take a toll on your spirit and mental health, so it’s important to take some time out to enjoy the lighter side of life.
As they say, laughter is the best medicine.
With that being said, here are some of the funniest jokes and memes to share this Pride, as well as some great Instagram captions.
Hilarious Pride jokes
Okay, Maxwell is iconic.

(Picture: @maxxbarrett/Twitter)2. It happens to the best of us, babe.

(Picture: @waltmontiel/Twitter)4. Why do they think it’s any of their business?
5. You had me in the first half, not going to lie.

(Picture: polyglotplatypus/Tumblr)6. We must protect your dad at all costs.

Dad: Kaiya I have a joke for you. I keep asking what LGBT stands for, but no one will give me a STRAIGHT answer— Good-Looks the Playboy (@crixx_anai) February 16, 2019

7. The only acceptable response.

(Picture: michellealonso_/Twitter)9. Am I fooling anyone?

(Picture: wtfofcimstraight/Tumblr)Relatable Pride memes
10. Why blend in when you were born to stand out?

(Picture: lern.jerky/Twitter)14. Netflix out there doing it for the girls, gays, and theys.

(Picture: Entertainment)16. Okay, these memes are getting a little too personal.

(Picture: Twitter)18. Being a kind and respectful person is free.

(Picture: Twitter)Pride month Instagram captions
Why pick one color when you could have the entire rainbow?
‘I hate the word “homophobia”. It’s not a phobia. You’re not scared. You’re an asshole.’ —Morgan Freeman
Proud this month and every other month.
I see the world through rainbow coloured glasses.
Let’s get one thing straight: I’m not.

MORE : How did rainbows become a symbol of LGBTQ+ Pride and what does it mean?