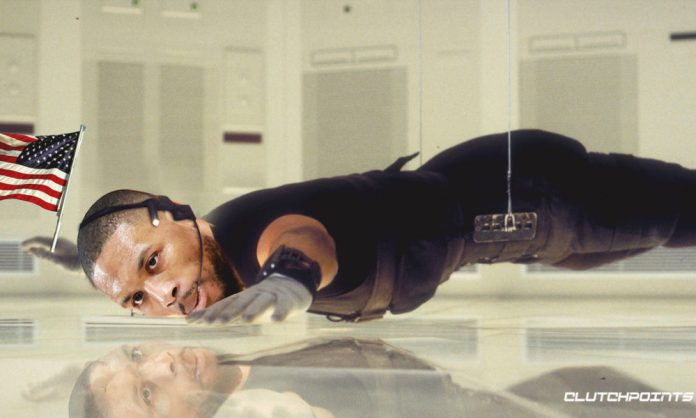 Portland Trail Blazers superstar Damian Lillard is one of the biggest names that recently declared his intention to suit up for Team USA in the coming Olympics. Dame clearly has his eyes set on a gold medal with the national team, but at the same time, former NBA champ Channing Frye suggests that Lillard might just have an ulterior motive.

According to Frye, Lillard should take advantage of the opportunity to try and recruit guys to Portland while he’s on international duty:
“Damian Lillard is one the most in-shape superstars that you see,” Frye said on the latest episode of the Talkin’ Blazers podcast, via Clevis Murray of NBC Sports. “I think he’s one of the guys that dedicates his summer to his body and his craft. Also, we’re missing the big picture. How are you going to recruit guys if they don’t know you?
“If you think of Team USA, you think KD and Kyrie, James Harden and KD, you think of Anthony Davis and LeBron. It has an absolute corner market of free agents of guys being like ‘I’d love to play with you.’ For him, he takes one summer, plays for his country, stays in shape. And then he’s talking to all these young guys, ‘man, I’d love for you to come here. Portland is tight.’”
Excellent point from Frye here. It’s funny that he threw in LeBron James’ name in the conversation considering how Frye was teammates with him during their time together with the Cleveland Cavaliers. Did Frye just drop a hint at LeBron’s recruitment tactics while on Team USA duty?
Lillard’s primary objective in joining the national squad is to represent his country for the Olympic games. However, as Frye suggests, this does not mean that the Blazers star can’t hit two birds with one stone:
“It’s all a game and I think he needs to start doing that,” Frye said. “Everyone does it and everyone knows they’ve been doing it. But yeah, go out there and get somebody to come to Portland. See what Boston wants for Jaylen Brown, that’ll be sick.”
Jaylen Brown heading to Portland to team up with Lillard? That does sound like a mouth-watering prospect. Whatever the case may be, it looks like Lillard could potentially return from his Team USA stint with more than just a gold medal.