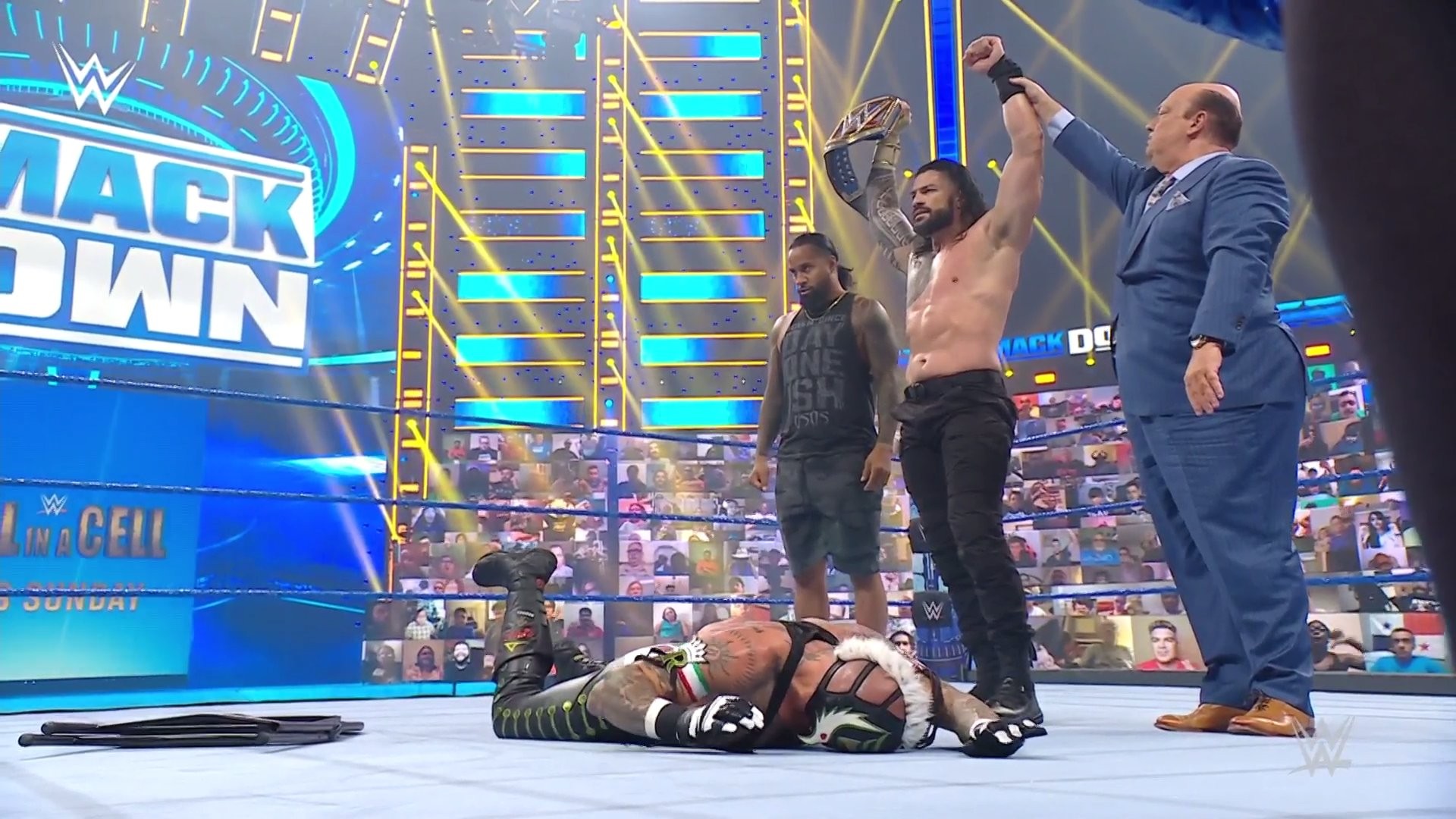 The Tribal Chief stands tall once again (Photo: WWE)Roman Reigns continued to dominate the SmackDown landscape as he took out WWE legend Rey Mysterio in an historic main event.
The rivals were initially due to clash at Hell In A Cell in the pay-per-view’s titular match, but things got reshuffled – with the card looking very different after Friday night – and the Universal Championship bout made it into the weekly show.
The evening kicked off in a fiery way as Rey was at his best on the mic, talking about the pain Roman has caused his family over the past couple of weeks – and especially last Friday when he powerbombed Dominik out of the ring.
Speaking from inside the cage, he repeated his social media challenge to move the cell match from Sunday to tonight, and said while he’s already had a response on Twitter, he wanted to hear it from him in person.
The cage then lowered before the Tribal Chief made his way onto the stage with Paul Heyman by his side and insisted he didn’t want to hurt Rey, but still promised to make Dominik’s beating look ‘PG’ compared to the pain he’ll bring on the legend tonight.
Mysterio repeated his challenge, as Roman looked angry and said while he tried to be ‘diplomatic’, now he’ll do things ‘his way’.
Later in the night, Jimmy Uso met with the Head of the Table backstage and pledged his allegiance to his cousin while revealing he hasn’t seen Jey ‘all week’.
He offered his help in the main event, but Roman insisted he needed his brother, told him to find him for the sake of their family’s business.
The match itself more than lived up to the billing, although the ad breaks hurt the momentum and were perhaps more noticeable given we could have seen it without them on Sunday.
Let that take nothing away from these men though, with Rey looking dangerous – and very smart – in the early goings as he used weapons and the cell itself to build some early momentum.
In the end, Roman looked like a beast as he hit a powerbomb over the top rope into the wall of the cell before locking in the guillotine choke as Mysterio quickly tapped out.
Commander Azeez debuts, Otis and Chad Gable destroy Angelo Dawkins, and King Corbin loses his crown
The first match of the night saw Commander Azeez and Apollo Crews – after some threatening and inspiring words – get in the ring for their tag team bout against Big E and Kevin Owens.
KO and the New Day man were hyped before the bell, although no one involved look happy as Sami Zayn made his way down to join commentary.
The match was fun and a decent early showcase for Azeez, who pinned Owens after the Nigerian Nail and delivered a second after the bell – much to the delight of Sami.
Backstage, KO – choking and spluttering, selling the effects of the devastating move – stormed into Adam Pearce and Sonya Deville’s office and demanded a match with Zayn at Hell In A Cell, which was quickly confirmed.
Up next, it was time for yet another match between King Corbin and Shinsuke Nakamura, with the delights of Rick Boogs playing the King of Strong Style down to the ring.
The two men put on a fun match – albeit one we’ve seen before – which ended with Nakamura picking up the win to take the crown.
While a King of the Ring tournament should definitely follow, another positive for this should be Corbin getting to shake up his character without being hampered by the ‘king’ gimmick.
Elsewhere, we also heard from the SmackDown Women’s Champion as Bianca Belair called out ‘bully’ Bayley before their match on Sunday night.
This is the best the EST of WWE has been on the mic in a long time, and she delivered a brilliantly passionate promo as she called on the Role Model to face her inside Hell In A Cell this weekend.
Bayley came out and immediately attacked her rival, sparking a back and forth brawl ending with the challenger standing tall.
Otis and his new cleanshaven look stepped out on SmackDown to face Angelo Dawkins one week after destroying him and his Street Profits partner Montez Ford.
Alpha Academy’s Otis and Chad Gable attacked Dawkins before the bell, battering him at ringside and targeting his injured arm, eventually hitting a huge discus clothesline/German Suplex combo to bring the beatdown to an end.
More: US TV news

Before the main event, Cesaro sat down with Kayla Braxton with some strong words for Seth Rollins before the SmackDown Saviour interrupted.
The Drip King delivered a typically brilliant, sinister promo as he calmly tore down the Swiss Superman and promised to ‘put him in his place’ on Sunday.
Cesaro got the last laugh, saying he respects Seth as a competitor before shoving his rival off his chair.

Got a story?
If you’ve got a celebrity story, video or pictures get in touch with the Metro.co.uk entertainment team by emailing us celebtips@metro.co.uk, calling 020 3615 2145 or by visiting our Submit Stuff page – we’d love to hear from you.

MORE : WWE legend Rey Mysterio wanted to ‘leave his stamp’ on Hell In A Cell