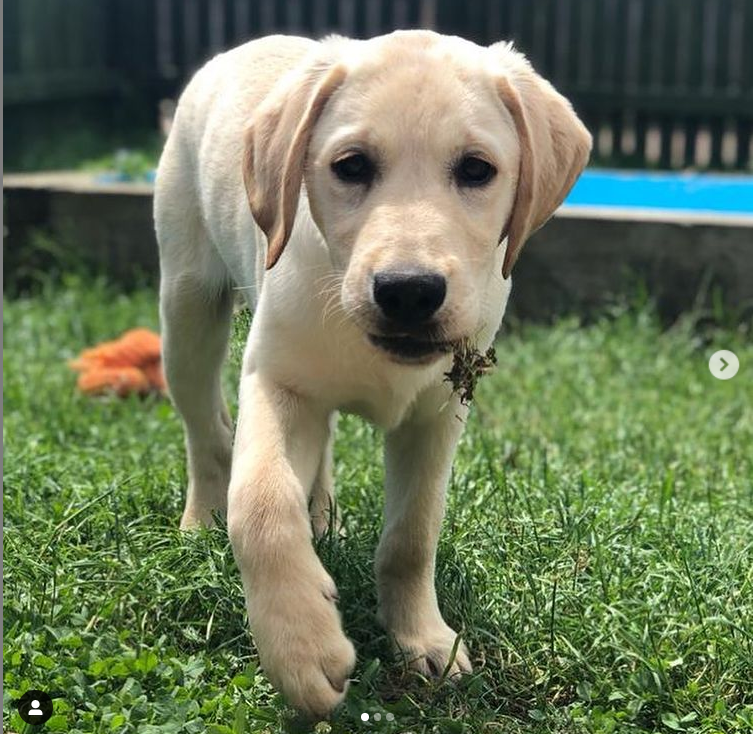 Vicky Pattison has a very energetic new puppy (Picture: Instagram/vickypattison)Vicky Pattison has given an insight into the chaos that is her home now she has a new ‘very rambunctious’, and very cute, Labrador puppy.
Taking to social media to share an update on the adorable new addition to her household, named Milo, Vicky also posted a snap of her frazzled face, framed by wild hair.
She wrote: ‘Get a puppy they said… it’ll be great they said… THEY LIED!!!!!!!!’
Her carousel included snaps of Milo making his presence known inside and outside of Vicky’s Essex house, including unravelled brown paper from a delivery box he’d expertly ripped into, a hole in the garden and a, um, “present” the not-quite-trained pup had left in the middle of her laminate wood flooring.
The reality TV star admitted: ‘I think it is safe to say I underestimated this task.. I am not too proud to admit that Milo is a bit of a handful.’
Detailing his list of tricky habits, she continued: ‘He digs like a mole, steals food like a sneaky fox, poos like an elephant and scratches like Rachel’s evil bald cat in frienda [sic], uses his mamma as a human chew toy… and still I love him so much.’
However, the former Geordie Shore cast member revealed that her ‘beautiful but very rambunctious little pup’ was now enrolled in puppy classes, commenting: ‘I think it’s for the best’ with a laughing crying emoji and a face-palm emoji.
Vicky’s celebrity pals were quick to coo over Milo and reassure Vicky that she would have the best time as a dog owner.
Ulrika Jonsson commented: ‘Oh, Vixters!!! This is going to be wonderful!!!’, with a red heart emoji.
Past Love Island contestant Shaughna Phillips was taken in by the super-sweet pooch, writing: ‘I mean the smile’, with a whole trail of various emoji.

Vicky, 33, and her boyfriend, 27-year-old Ercan Ramadan, adopted Milo as part of the Dogs Trust Puppy Pilot scheme, which rescues, rehabilitates and rehomes puppies that have been illegally smuggled into the UK.
The couple have had Milo for less than a week and Vicky was keen to publicly thank the charity for being ‘super supportive’ and ‘there for us every single step of the way’.
Got a story?
If you’ve got a celebrity story, video or pictures get in touch with the Metro.co.uk entertainment team by emailing us celebtips@metro.co.uk, calling 020 3615 2145 or by visiting our Submit Stuff page – we’d love to hear from you.