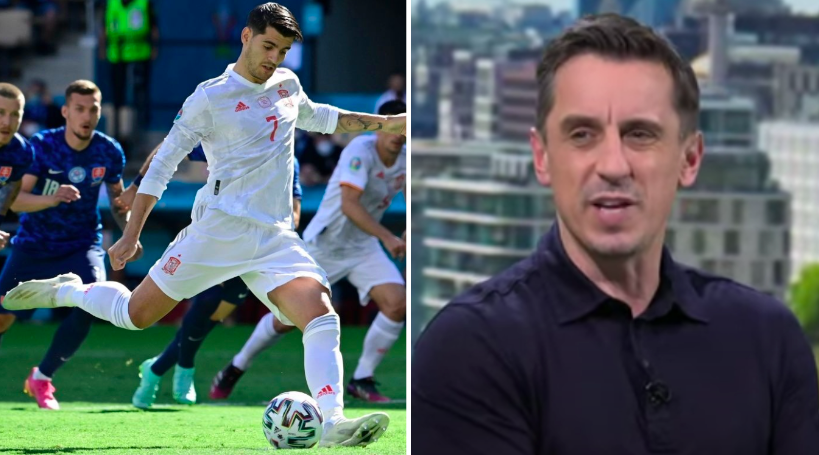 Alvaro Morata had a penalty saved by Martin Dubravka in Spain’s Euro 2020 clash with Slovakia (Picture: Getty)Gary Neville had little sympathy for Alvaro Morata following the striker’s penalty miss against Slovakia at Euro 2020, joking it looked as if he was ‘apologising’ to the ball before stepping up to take the spot-kick.
With Spain needing a point to progress to the last 16, Morata had a glorious chance to put his team in front in only the 12th minute after Koke was brought down in the box but his strike any lacked conviction and was easily saved by Martin Dubravka to his right.
Fortunately for Morata, Dubravka took much of the attention away from him as the goalkeeper’s first-half performance descended dramatically and bordered on the comical at times.
First, the Newcastle man calamitously parried the ball into his own net in the 30th minute before erratically racing out of his goal in the build-up to Aymeric Laporte’s header right on half-time.

Morata has scored one goal at the tournament (Picture: Getty)However, it was Morata’s performance that dominated discussion in the ITV Studio, with pundits Neville, Ashley Cole and Eni Aluko raising serious question about the Juventus attacker before the game had even started.
Former Manchester United and England right-back Neville said: ‘He’s got that vulnerable look about him, almost like he needs a cuddle.
‘And he looks like when he misses a chance, he’s fearing what the media and what the press and what his team-mates might say.
‘It looks like he’s had some criticism from playing for the national team.
‘He’s not a Diego Costa and he’s not a [Robert] Lewandowski or Harry Kane, these characters that you stick on the pitch and are steely eyed. He’s just not that, he’s very different.’
More: US

Neville took aim at Morata again at the half-time break after the former Chelsea striker missed his chance to put Spain in front from the penalty spot.
Remarkably, it was the fifth time in a row that Luis Enrique’s side had failed to convert a spot-kick.
‘I thought we were going to be cuddling Morata at half-time again!’ he said.
‘It’s like he apologises to the ball before he makes contact with it: “Sorry, I’m gonna have to kick you here!”
‘There is just no belief.
‘I have to say, I was glass half empty with Spain before the game but you just look at the chances they’ve created, even in the three games, and if they can start to take them and he [Morata] can take some confidence from somewhere then they will be dangerous.’