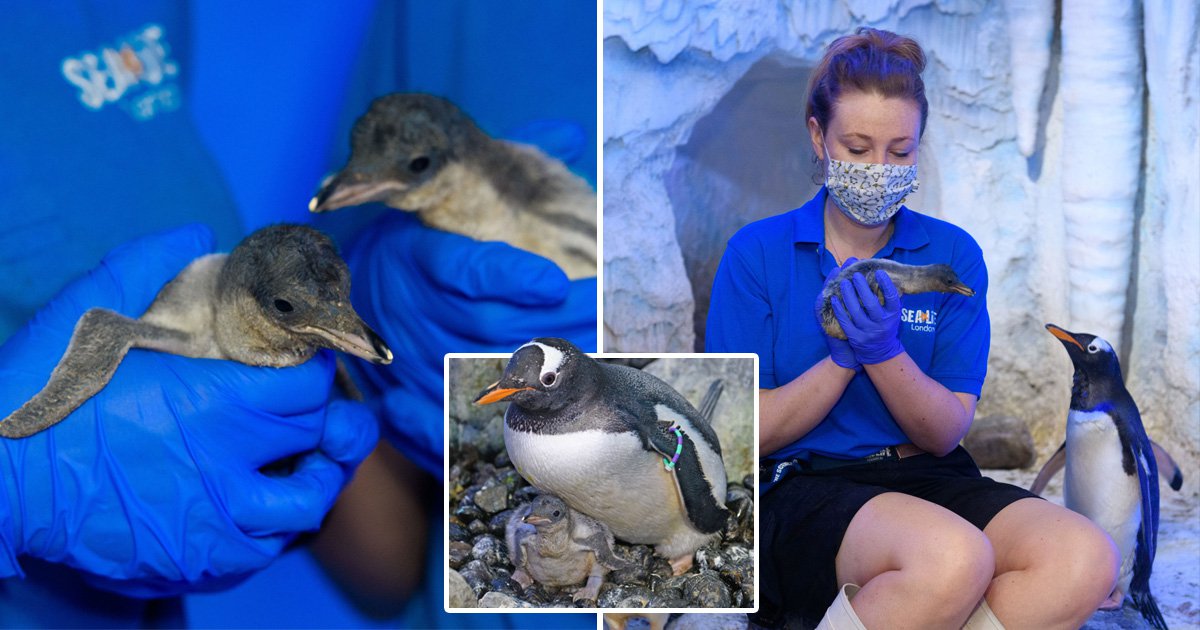 The baby penguins have not yet been named (Picture: PA)A London aquarium is celebrating after two baby penguins were born after a successful breeding season in lockdown.
The pair of chicks were born at Sea Life on the South Bank to parents Ripley and Elton.
They were the only hatchlings from Gentoo penguins successfully bred in England this year.
One chick is now being reared by its biological parents, while the other has been adopted by another established pair at the aquarium – Max and Snork.
Catherine Pritchard, the aquarium’s general manager, said: ‘It’s incredibly special to have not just one, but two new chicks to have successfully hatched at the London Aquarium proving lockdown love also existed in our Gentoo penguin colony.
‘We can’t wait to see the hatchlings grow and develop under the watchful eyes of their proud parents Ripley and Elton, and Max and Snork.’
They weighed 105g and 98g when they were born, and will not be named until their sex has been established.
The first chick began to break through its egg – which is called pipping – in May, and the other followed soon after.

The pair of chicks were born at Sea Life London Aquarium on the South Bank (Picture: PA)

They were born to proud parents Ripley and Elton (Picture: PA)

They were the only hatchlings from Gentoo penguins successfully bred in England this year (Picture: PA)

They will not be named until their sex has been determined (Picture: PA)

It takes between 65 and 75 days for the eggs to hatch (Picture: PA)

One of the chicks has been adopted by established pair Max and Snork to look after (Picture: PA)

They weighed 105g and 98g when they were born (Picture: PA)Staff say the chicks are integrating well with the rest of the colony, and are being watched closely to monitor their progress.
‘The continued success of our Gentoo breeding programme here at Sea Life London Aquarium is down to the fantastic work of our expert animal care team and we can’t wait for our guests to meet the new chicks for themselves,’ Catherine added.
Gentoo penguins live in the Antarctic Peninsula and numerous islands around the frozen continent, and are the third-largest penguins in the world.
It takes between 65 and 75 days for the eggs to hatch.
It comes after the aquarium launched another mating season last month, just in time for the centre to reopen its doors as coronavirus restrictions eased.
More: London

It saw two all-female couples among them – Marmalade and Chickpea, and Marama and Rocky.
Catherine said at the time: ‘Without a doubt, our Gentoo penguins are one of our most loved creatures and we’re so pleased that we’re able to reopen our doors in time for guests to be able to witness their amazing courtship rituals.
‘Gentoo penguins are the ultimate romantics, and their dating techniques are truly unique – so much so that as humans, we could certainly learn a thing or two from their passion and commitment to finding a mate.
‘As well as our male-female penguin couples, this breeding season we also have two female same-sex couples who are also going through their nesting rituals.’
Get in touch with our news team by emailing us at webnews@metro.co.uk.
For more stories like this, check our news page.