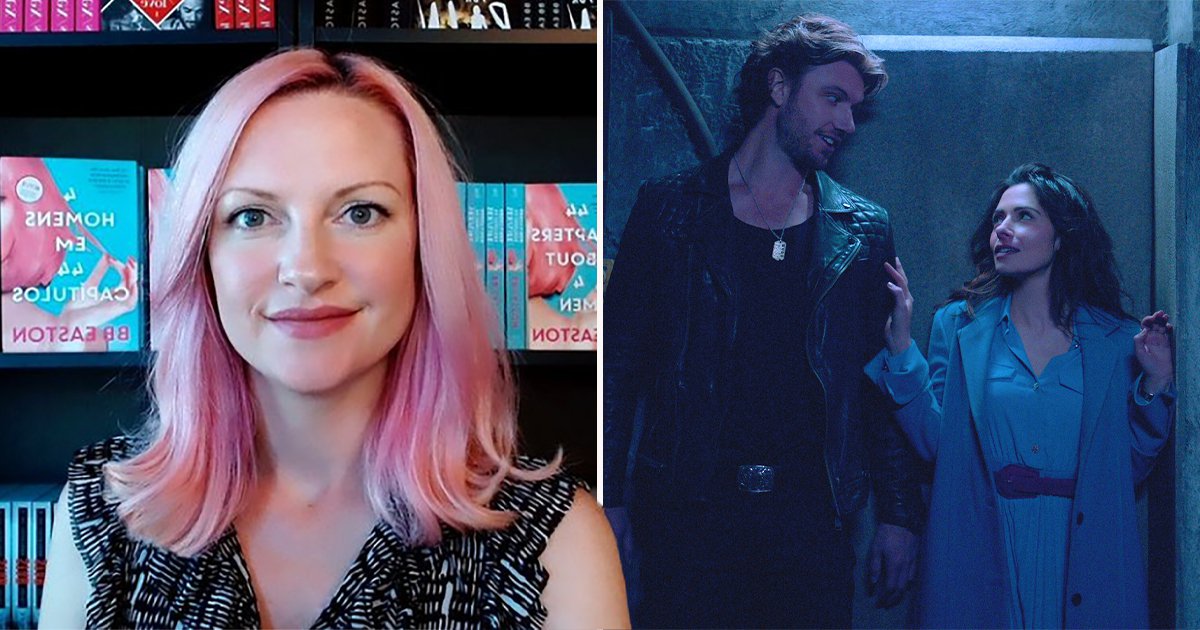 Sex/Life author B.B. Easton shares her thoughts about the new Netflix adaptation (Picture: Instagram/author.bb.easton/Netflix)Netflix’s steamy new series, Sex/Life, takes inspiration from B.B. Easton’s smash-hit memoir and the author states viewers will love the ‘dramatic’ adaptation.
Based on Sex/Life: 44 Chapters About 4 Men, the show sees a woman’s daring sexual past collides with her married-with-kids present when the bad-boy ex she can’t stop fantasizing about crashes back into her life.
However, fans of the novel will know that story reads in a completely different way.
Easton revisits her relationships with three ex-boyfriends in a journal, after realizing that her straight-laced husband has been reading her entries in order to figure out how to please her.
Indeed, when husband Ken starts to act out the words on the pages, Easton believes she might have stumbled upon the holy grail of behavior modification techniques.
The author spoke exclusively to Metro.co.uk about seeing a new take on her novel brought to life as she explained: ‘I wrote the book to entertain myself, first and foremost, and when I published it I did so under the assumption that no one would ever read it.

Sex/Life follows character Billie Connelly as she’s torn between a past lover and her present relationship with a straight-laced husband (Picture: Amanda Matlovich/Netflix)‘The team at Netflix took that story and re-wrote it with the AUDIENCE in mind every step of the way. So I knew that every decision they made, they made in order to produce the biggest, boldest, most intense viewer experience possible. And they definitely succeeded!’
The writer confirmed she didn’t work on the script but had been kept informed about the direction it was being taken in as she continued: ‘The team at Netflix did a great job keeping me updated on their progress and sending sample scripts for me to read along the way, but I wasn’t involved in the process at all.
‘But honestly, after toiling away for years to bring the book to life, it was kind of nice to let someone else do all the work for a change.’
‘I think the writers did an amazing job of injecting humor at just the right places to give the viewer a perfectly-timed release from all of that delicious tension,’ she added.

The Netflix series has made significant changes to the plot but Easton believes it helps make viewing even more intense (Picture: Sophie Giraud/Netflix)Easton is more than happy with the show decision to bring one of the exes to the present as she explained: ‘I think the idea of bringing Billie’s ex-boyfriend into her present-day life is such a fun, dramatic twist.
‘In 44 Chapters About 4 Men, the stories about my exes are all told in past tense, but man, those scenes between Brad and Cooper on the show are intense! It makes for such great TV.’
Easton also praises executive producer J. Miles Dale for choosing to hire a female showrunner and directors for the series.

Fans of the novel will get to enjoy the story in another format, after first falling in love with Easton’s hilarious memoir (Picture: Amanda Matlovich/Netflix)‘Not only did Netflix honor his vision, they kept that energy going by hiring a mostly female writing staff and a ton of female crew members as well,’ she stated. ‘I had the pleasure of speaking to a female camera operator who said that she was working with a female sound recordist for the first time in her fifteen-year career!’
As for what impact she hopes the show and the story will have on viewers, Easton said: ‘We’ve seen and read stories about women exploring their fantasies and sexuality before, but these stories almost always revolve around single women and end with marriage and babies.

‘Throughout history women have been told that the second a man slides a ring on our finger, we are no longer protagonist material. We cease to be seen as interesting, desirable, or marketable.’
She continued: ‘But in 44 Chapters About 4 Men and Sex/Life, we show the world that a woman can be married with a baby and a toddler and still be funny, still be bold, and still be cunning enough to find a way to get everything she wants out of life, including really great sex.’
Looking back at how she first brough the story into the world by publishing her book, the author stated: ‘Mustering the courage to publish 44 Chapters About 4 Men was one of the hardest, best decisions I’ve ever made. The success of that book allowed me to free myself from a career that was slowly devouring the real me.
More: Netflix

See also  Chrissy Teigen Says Kim Kardashian ‘Gave Her All’ Trying To Save Kanye West Marriage And Updates Fans On How She's Doing!

‘It scooped me up off of the hamster wheel of perfectionism, professionalism, and endless stress, and gently set me down on a new path—one of playfulness and authenticity and the pursuit of happiness.’
BB Easton is the author of Sex/Life: 44 Chapters About 4 Men, published in paperback and ebook by Sphere.
Sex/Life is available now on Netflix.
Got a story?
If you’ve got a celebrity story, video or pictures get in touch with the Metro.co.uk entertainment team by emailing us celebtips@metro.co.uk, calling 020 3615 2145 or by visiting our Submit Stuff page – we’d love to hear from you.