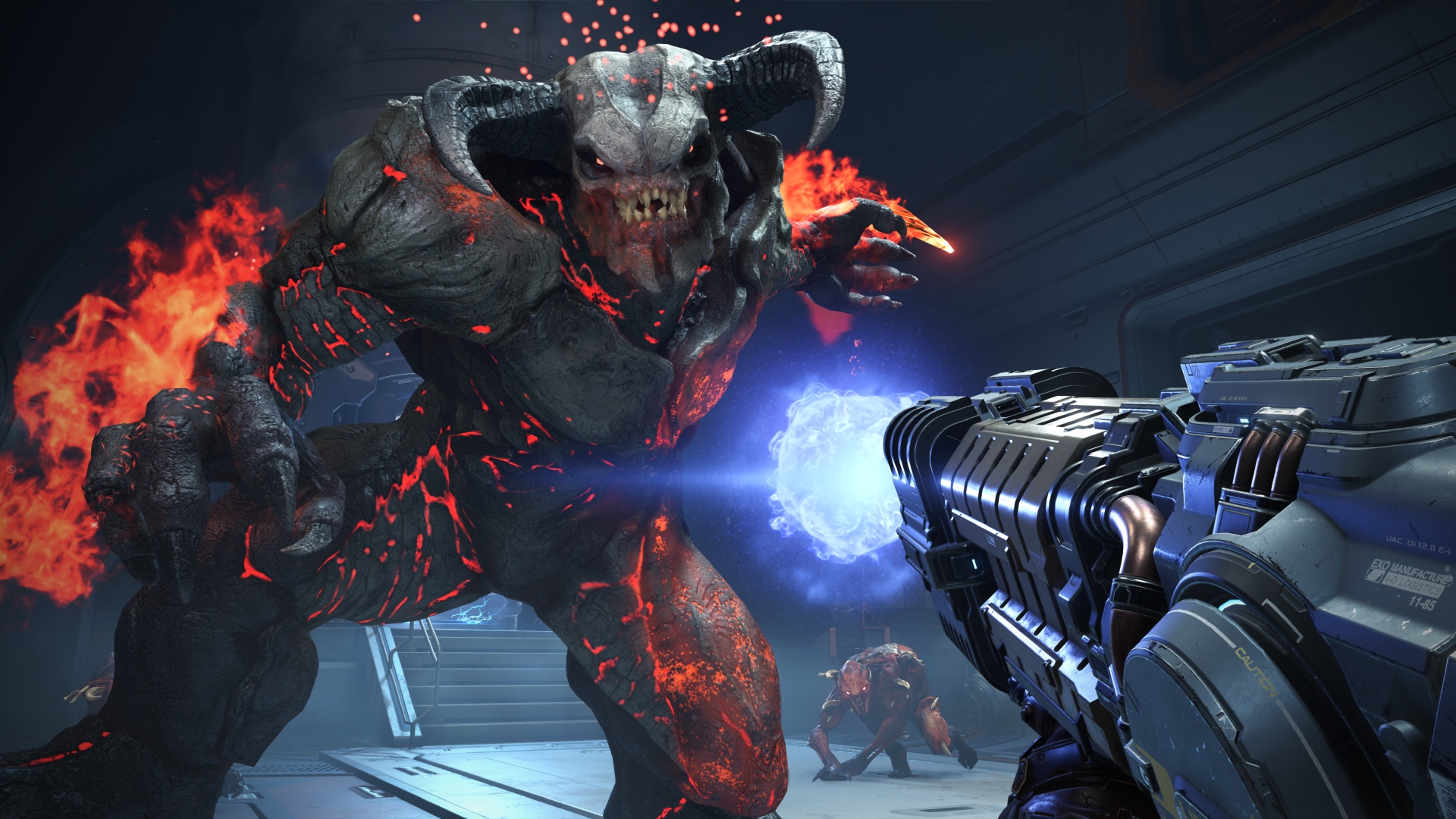 Doom Eternal – metal through and through (pic: Bethesda)Readers discuss the best video game music from the current and previous generation, including Bloodborne and Splatoon 2.
The subject for this week’s Hot Topic was inspired by reader Andee but limited the discussion to the PlayStation 4 and 5 era, to ensure it wasn’t just the usual suspects that got mentioned.
People found plenty of games to praise, although there was some concern that modern soundtracks are not as memorable as those of old, even if they are technically more accomplished.
Metal DoomI’m tempted to say Super Smash Bros. Ultimate for this, since it includes almost every piece of Nintendo music ever, not to mention much more besides. But instead I’m going to go with Doom and Doom Eternal. I think everyone was surprised by how good these games were, but I think a big part of the appeal is the music, which works perfectly with both the heavy metal stylings and the unusual pacing, which goes from relative quietness for extended periods to absolute chaos in an instant.
When you’re just exploring, the soundtrack is like a chainsaw, just chugging away quietly while it’s not being used. Then when the demons appear and you start mowing them down it roars into life with some absolutely banging tunes.
It’s metal but not in a way that is off-putting to non-fans and it matches the game perfectly. I listen to it all the time when I’m working or exercising.Caliborn
New waveI just love the music from the two Splatoon games. It’s Nintendo’s only major new series of the last few years and the style of music is just as original as the rest of it. The pop music style combined with the fake language they’re singing in is just fantastic and I love every track.
A problem with any multiplayer game is you can get tired of the levels if you play it too much but with Splatoon I always look forward to the music as well, which I can think of as happening with any similar games. Sitting her I’m not even sure if Call Of Duty or Battlefield has music during a match!
There’s something to be said for a great soundtrack elevating the action but also matching the tone and style of the visuals and gameplay, and for me Splatoon does exactly that.Focus
Correct answerThe definitive right answer to this question is Sayonara Wild Hearts, but I doubt it’ll get mentioned much as it doesn’t seem to have been nearly as big hit as it deserves. The developers themselves described it as an interactive pop album and that’s exactly what it is, with simple gameplay that’s matched perfectly with the music.
It’s by Daniel Olsén and Jonathan Eng, with vocals by Linnea Olsson, and I encourage everyone to try the game if they can. Don’t listen to the songs on their own as it won’t mean nearly as much to you but play the game and they become truly magically.Wrangler
E-mail your comments to: gamecentral@metro.co.uk
Legendarily mellowGiven how much else about it is amazing the soundtrack for Zelda: Breath Of The Wild often doesn’t get mentioned but here I feel I must because it’s really amazing. For such a gigantic open world game it’s very difficult to come up with a good soundtrack, as the game lasts hundreds of hours and you don’t want to be listening to any track that long.
Nintendo obviously realise so the soundtrack is very ethereal, with few obvious melodies. You almost forget it’s there and then it’ll suddenly rise up when something exciting happens, or you hear the faint strains of the classic theme tune come through when you list expect.
It’s just as amazing as the rest of the game and a great thing to listen to in the background, given how mellow it is.Jordan
Supreme momentsMy favourite soundtrack in video games from the PlayStation 4 and Xbox One period are as follows. First up is ToeJam & Earl: Back In The Grove and one particular tune from the game’s soundtrack: Dark Level Funk. This, out of the entire game’s soundtrack, is my favourite one. My second favourite is Kay Nakayama – Supreme Moment from Gran Turismo Sport on the PlayStation 4. These are two tracks that I enjoy listening to unwind and relax to.
Another game soundtrack tune that I have also enjoyed is the caution theme from Metal Gear Solid 5: Ground Zeros, which is another tune that I listen to from time to time when I am relaxing. Both Streets Of Rage 4 and Resident Evil Village also have single tunes from the soundtracks that I have enjoyed listening to, these are Oliver Derivere – Rising Up and Scuttle Maximum. The save room theme from Resident Evil Village also makes my list. Compared to other classic games they have not let me down and have managed to keep me satisfied.
Dead Rising 3 and the Dead Rising Triple pack on Xbox One also have three tunes that I enjoy listening to. One is one of the ambients from Dead Rising 3, along with the remastered version soundtrack of Dead Rising 2: Off The Record, these are the Frank West Remix and the Sandbox Mode Theme. The current standards of video games music haven’t let me down one bit but in the far future I am confident that we will see many more great soundtracks from games.gaz be rotten (gamertag)
Angry responseStreets Of Rage had the best damn soundtrack I’ve ever heard before or since.Russell
GC: Do you mean Streets Of Rage 4? Because the others definitely don’t count for this Hot Topic.
More: Gaming

Wonderous soundtrackThis is one of my favourite types of Hot Topics, with me being a musical enthusiast. Gaming has got me interested in electronic and electronica styles of music with a lot of homemade and professionally made music with a lot of good beats and symphonic ambiance to back up the exciting gameplay. Also, games like Subnautica and Celeste, along with games like Hollow Knight, make the world and music merge seamlessly to great effect.
When entering different biomes in Subnautica it can be a very nervous feeling, especially deep, deep open ocean waters when leaving the shallows. It’s scary enough but the music changes and adapts to create a type of fear-inducing symphony which makes the ocean a very ominous place to be in! The further you go down into the depths the music changes again as the water pressure intensifies and light diminishes the deeper you get, and the foreboding music matches the visuals you’re currently experiencing around you.
Risk Of Rain and Risk Of Rain 2, by composer Chris Christodoulou, are epic soundtracks based on a space rock or progressive metal type of style, which may remind you of bands like Pink Floyd and the calmer but still metal side of Devin Townsend. It suits the game perfectly, due to the artwork and gameplay type, but you can easily chill to it with your eyes closed and just think about far off images, with the music being the only stimulation you need.
But my favourite ever over the recent years is a soundtrack I bought, plus the DLC soundtrack too. Bloodborne: truly an epic and one I classify beyond even the Demon’s and Dark Souls games, and that really is saying something. Music is not really needed when the game is already dripping in an eldritch atmosphere but when you take on one of the many bosses then, wow! The music takes over and combined with the battle at hand, makes it into an absolute epic moment when trying to win against all the odds.
One area of the game which is in the Upper Cathedral Ward has an actual soundtrack of which I did not notice at first! My first playthrough was just me gripping the controller and trying to overcome the lycanthropes or werewolves and the foreboding sound effects. I failed to hear the music but when I revisited the area in a later New Game+ I could hear the subtle low unearthly choir and the music which accompanied it, which sounded like a few untuned string instruments creating an absolute spine-chilling merging of music and game world. Sound effects and music, a masterpiece of gaming design.
But my favourite boss battle music from Bloodborne has to be the awe-inspiring and most epic orchestral arrangement of sound, music, and a spot-on choir! It is the battle with Ebrietas, Daughter of the Cosmos, one of the Great Ones. Inspired possibly by H. P. Lovecraft’s description of Azathoth and the unearthly ethereal chords which seem to be a part of his cosmic make-up. Wow is just an understatement in this boss battle. Truly epic in every sense.
I feel gaming soundtracks in general just keep on getting better and better. These musical magician developers really do have a good ear for sound, and to incorporate that to match that particular game is just mind-blowing. I for one will still be listening to them for many years to come, and I’m excited to find out what other musical delights come out from these future gaming gems.Alucard
E-mail your comments to: gamecentral@metro.co.uk
The small printNew Inbox updates appear every weekday morning, with special Hot Topic Inboxes at the weekend. Readers’ letters are used on merit and may be edited for length and content.
You can also submit your own 500 to 600-word Reader’s Feature at any time, which if used will be shown in the next available weekend slot.
You can also leave your comments below and don’t forget to follow us on Twitter.