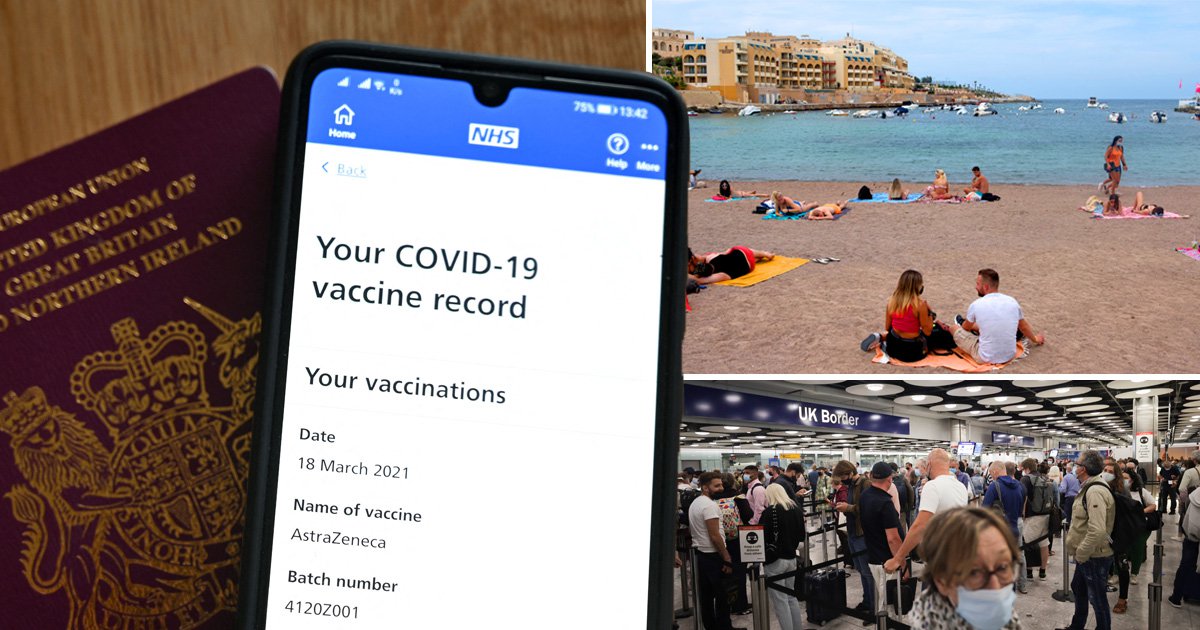 Malta’s decision will come as a relief to holidaymakers who were due to fly out this week (Picture: Getty; Reuters)Travellers heading to Malta after it was added to the green list will now be able to use the NHS app as proof they’ve been vaccinated.
The country has u-turned on its decision to ban entry to Brits unless they had a formal letter from the NHS after coming under pressure from holidaymakers.
Transport Secretary Grant Shapps confirmed the news on Thursday afternoon, handing a major boost to people who are due to fly out in the coming days.
He tweeted: ‘Pleased to say that #Malta now recognise our NHS Covid app (or NHS letter), to allow our fully vaccinated UK citizens access to their beautiful islands without the need to isolate.’
Malta was added to the green list on Wednesday due to its low number of Covid cases.
Its government is insisting only those who have had both doses of a vaccine can enter the country.
On Monday officials announced the NHS app would not be accepted as proof of vaccination, potentially scuppering thousands of holidays.
People due to fly out this week were sent into a panic as it can take five working days for an NHS letter to be delivered.

Many are planning breaks to Malta as it’s one of the few places on the green list (Picture: Getty Images)

Malta has now said Brits can prove their vaccination status using the NHS app (Picture: Getty Images/iStockphoto)Everyone over the age of 12 is required to be vaccinated, which means teenagers may not be able to travel as the UK is not currently vaccinating anyone under 18.
It’s not yet known if the UK has been able to resolve this issue as well.
Interest in holidays to Malta surged after it was added to the green list alongside Spain’s Balearic Islands and Portugal’s Madeira.

Tourists can download their vaccination record on the app two weeks after their second jab (Picture: Getty)Meanwhile, reports say the UK is set to open up quarantine-free travel to those who have been double-vaccinated ’in weeks’.
Under the country’s traffic light system, anyone visiting a destination on the ‘amber list’ – which includes all of mainland Europe – must self isolate upon their return to the UK.
But new rules could see this change in time for the school holidays which begin on July 23.
Get in touch with our news team by emailing us at webnews@metro.co.uk.
For more stories like this, check our news page.

Facebook
Twitter
Pinterest
WhatsApp
Previous articleRoyals vs. Red Sox prediction, odds, pick, and more
Next articleBritney Spears’ Father Jamie Claims He Never Prevented Her From Marrying And Having Kids – Puts All The Blame On His Co-Conservator!