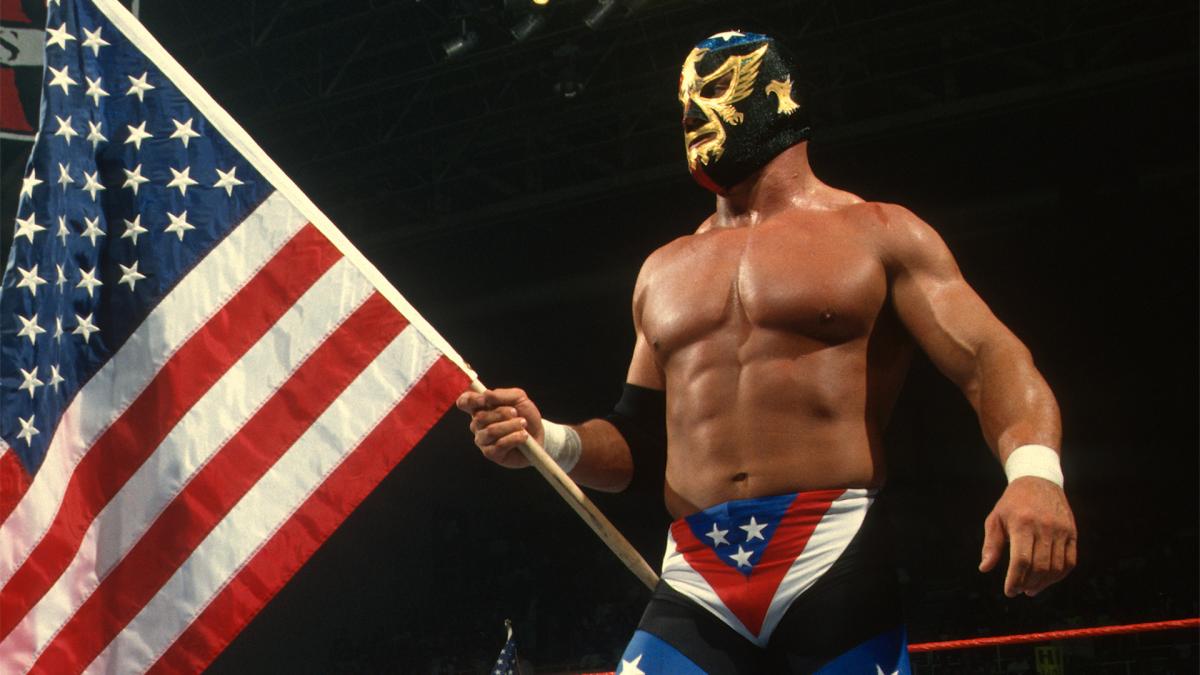 The wrestling world is mourning (Photo: WWE)Former WWE wrestler ‘The Patriot’ Del Wilkes has died aged 59.
The masked star made his debut for the company in 1997 and had previously appeared in the likes of the American Wrestling Association (AWA), Global Wrestling Federation (GWF), All Japan Pro Wrestling (AJPW) and World Championship Wrestling (WCW),
Revealing the news on Facebook, his friend Allen Wright Adkins wrote on Thursday night: ‘At the request of his family, it’s with a devastated heart that I let you know Heaven gained one of the most special men I’ve ever had the honor to know today.
‘Del Wilkes, I’ve loved you for 40 years and always will. Rest in peace, my dear friend…you’ll be missed more than you could ever know.’
No cause of death has been given yet.
He famously feuded with Canadian star Bret ‘The Hitman’ Hart in WWE, and held both the WCW and AWA Tag Team Titles.

The National Wrestling Alliance would like to send condolences to the family and friends of Del âThe Patriotâ Wilkes.An extraordinary athlete and man, his contributions to our industry in and out of the ring will always be remembered. #RIPDelWilkes pic.twitter.com/2DcDr6ZDb9— NWA (@nwa) July 1, 2021

Iâm saddened to hear of the passing of The Patriot Del Wilkes. A great wrestler and a favorite opponent in WCW. My deepest condolences to his family.— William Regal (@RealKingRegal) July 1, 2021

In a statement, WWE said: ‘Before making a name for himself in the squared circle, Wilkes was a standout on the football field for the University of South Carolina, where he earned the distinction of being voted a consensus All-American.
‘After making the switch to sports-entertainment, Wilkes competed all over the world before arriving in WWE in 1997 as The Patriot.
‘A Superstar quickly on the rise, The Patriot proudly donned the red, white and blue of America in the midst of a rivalry with The Hart Foundation, leading to a memorable match against Bret Hart for the WWE Championship at In Your House: Ground Zero just two months after his WWE debut.
‘WWE extends its condolences to Wilkes’ family and friends.’
More: US TV news

See also  Games Inbox: What should Sony learn from the PS3 U-turn?

The NWA tweeted: ‘The National Wrestling Alliance would like to send condolences to the family and friends of Del ‘The Patriot’ Wilkes.
‘An extraordinary athlete and man, his contributions to our industry in and out of the ring will always be remembered.  #RIPDelWilkes’
And NXT General Manager William Regal wrote: ‘I’m saddened to hear of the passing of The Patriot Del Wilkes. A great wrestler and a favorite opponent in WCW. My deepest condolences to his family.’
Got a story?
If you’ve got a celebrity story, video or pictures get in touch with the Metro.co.uk entertainment team by emailing us celebtips@metro.co.uk, calling 020 3615 2145 or by visiting our Submit Stuff page – we’d love to hear from you.

MORE : WWE’s Triple H made generous offer to help Jon Moxley when he got injured months after he left for AEW