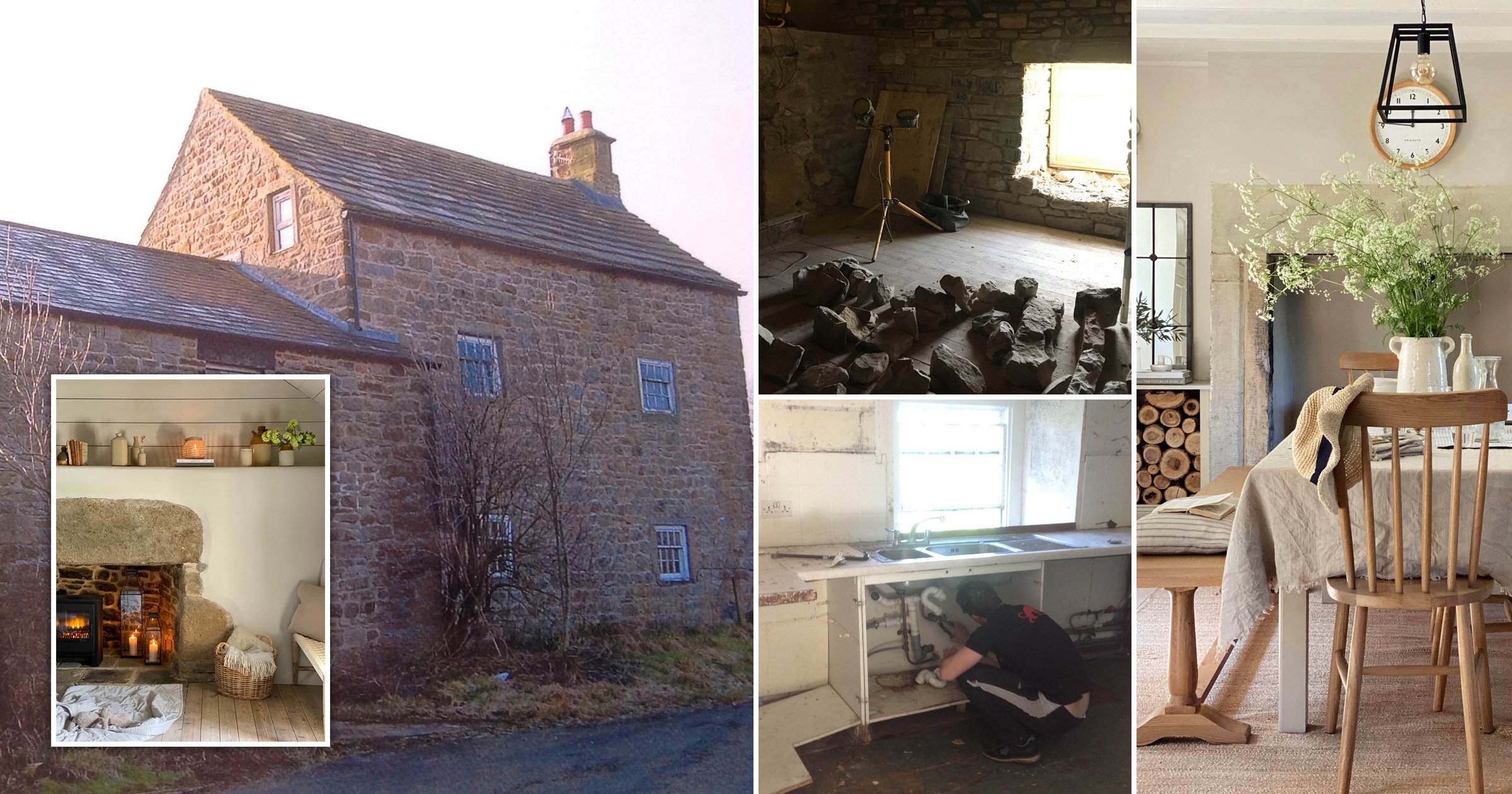 When Stephanie and Graeme bought their 500-year-old cottage in Northumberland, it was ‘run-down and unliveable’ (Picture: Jam Press/@stephgowla)Stephanie Gowland, 29, and her husband Graeme, 35, never planned to live in the 500-year-old cottage they bought in Northumberland long-term.
Instead, they intended to renovate the space as a quick project, then sell it on for a profit.
But after they spent months transforming the ‘run-down’ and ‘unliveable’ home, – doing the work themselves, even during two pregnancies – the couple fell in love with it.
And now, they have no plans to leave the home they’ve created for themselves and their two daughters Olivia, four, and Goldie, two.
‘The cottage was very dated, dirty and run-down,’ Stephanie said.
‘It had always been a rented property and you could see it had never been truly loved.
‘It wasn’t liveable and had a lot of issues like damp.

The couple could see the property’s potential (Picture: Jam Press/@stephgowla)

But they knew it would need a lot of work (Picture: Jam Press/@stephgowla)

Stephanie and Graeme wanted to maintain the exposed brick and beams, but modernise the space (Picture: Jam Press/@stephgowla)‘I think we snagged it purely because others were put off by the amount of work it required.
‘But we saw its potential with high ceilings, exposed beams and attached barn.’
With a budget of £65,000, the couple started off by opening up all the sealed windows, then stripped back the interiors.
Even this made a difference, and the pair discovered an old stone fireplace, which is now a major focal point.

The discovery of a fireplace was great news (Picture: Jam Press/@stephgowla)

The couple planned for the renovation to be a quick project so they could sell the cottage on (Picture: Jam Press/@stephgowla)Shortly after the DIY kicked off, Stephanie fell pregnant with Olivia. This added some time pressure to get the home ready in time for their first daughter’s arrival in March 2017.
That could have been stressful, but the parents say they’re actually pleased with how things turned out.
Stephanie said: ‘A lot of our decisions were quite rushed and progress completely slowed when our first daughter arrived, and then soon a second daughter.
‘We’ve been slowly working our way around the house ever since – but this turned out to be the best thing for us, because living in the house while decorating has made us realise how we use the spaces and what it really needs.’

The parents did all the work themselves to keep costs down (Picture: Jam Press/@stephgowla)

They stuck to a budget of £65,000 (Picture: Jam Press/@stephgowla)The pair completed the majority of the work themselves to keep costs low, with Graeme doing the bigger jobs, including joinery, on weekends and weeknights, and Stephanie focusing on decorating and tiling.
The only professional assistance they had for the whole renovation was hiring plasterers and builders for the external lime pointing.
In total, they estimate they have spent £65,000 on the renovation – including £8,000 on the boiler and radiators, £2,500 on the bathroom, £9,000 on plastering and pointing, £1,500 on adding a fireplace and stove, and £3,000 on the kitchen.

As they were working on the home, the couple fell in love with it (Picture: Jam Press/@stephgowla)

They now have no plans to leave (Picture: Jam Press/@stephgowla)

Though they do hope they’ve significantly upped the home’s value (Picture: Jam Press/@stephgowla)The rest of the costs came from building, plumbing and electrical materials, hiring equipment and tools, decorating, and garden works – where they cleared and levelled the space before creating flower beds, a lawned area and gravelled seating area.
‘We have done a lot of DIY,’ said Stephanie. ‘What we didn’t already know how to do, we learnt how to do.
‘My husband has self-taught a lot – including joinery, which he has found a bit of a passion for.
‘He has built doors, cupboards, a log store next to the fireplace, built-in bedroom shelves and window shutters.

The kitchen was the couple’s favourite part of DIY (Picture: Jam Press/@stephgowla)

They brought the interiors up to date while keeping some original features (Picture: Jam Press/@stephgowla)

Stephanie continued with the DIY during two pregnancies (Picture: Jam Press/@stephgowla)‘I’ve done all the decorating, sanding back and re-treating of the wooden floors and beams.
‘I’ve also done all the tiling in the house.
‘Everything was a challenge as nothing is straight or square in old cottages.
‘The metre-thick stone walls also made getting electric wiring and water pipes through tricky.
‘Keeping motivation going through the cold, dark winter nights before we got the house liveable was a particularly tricky time – especially when I was pregnant and the countdown to move in was on.’

They learned as they went along (Picture: Jam Press/@stephgowla)

The family loves the end result (Picture: Jam Press/@stephgowla)Stephanie continued the hard work during her pregnancy with Goldie, in May 2018, even as she grew exhausted.
One of the couple’s favourite DIY projects was transforming their £1,900 IKEA kitchen into a bespoke space with wooden countertops, dark blue doors and chic brass handles.
They chose to retain the property’s exposed brick and wooden beams, while bringing other bits up to date.

There’s a lot of neutral tones (Picture: Jam Press/@stephgowla)And the end result makes all the effort worth it.
The couple are yet to get a valuation on the house, but hope their work will have upped the price significantly.
‘I think it’s important to decorate according to your surroundings, light and the history of the building,’ said Stephanie.
‘Being sympathetic to the original features which make the home so unique – they need to be embraced.

Dreamy, right? (Picture: Jam Press/@stephgowla)‘We’ve learnt to appreciate new and old and learnt to combine the two.
‘The colours we’ve chosen don’t compete with the features and instead allow them to shine.
‘I’ve steered away from bright colours, instead adding them in with accessories like cushions and table cloths when I fancy a seasonal mix-up.’
‘We’ve learnt so much and have learnt from our mistakes along the way – renovating is so much more than re-painting.’
Do you have a story to share?
Get in touch by emailing MetroLifestyleTeam@Metro.co.uk.

MORE : How to budget for renovating your house from top to bottom

MORE : Couple save £3,400 by carrying out DIY bathroom transformation in just one week

MORE : How to get rid of flies in the house?

Get all the need-to-know property news, features and advice from Metro every week.