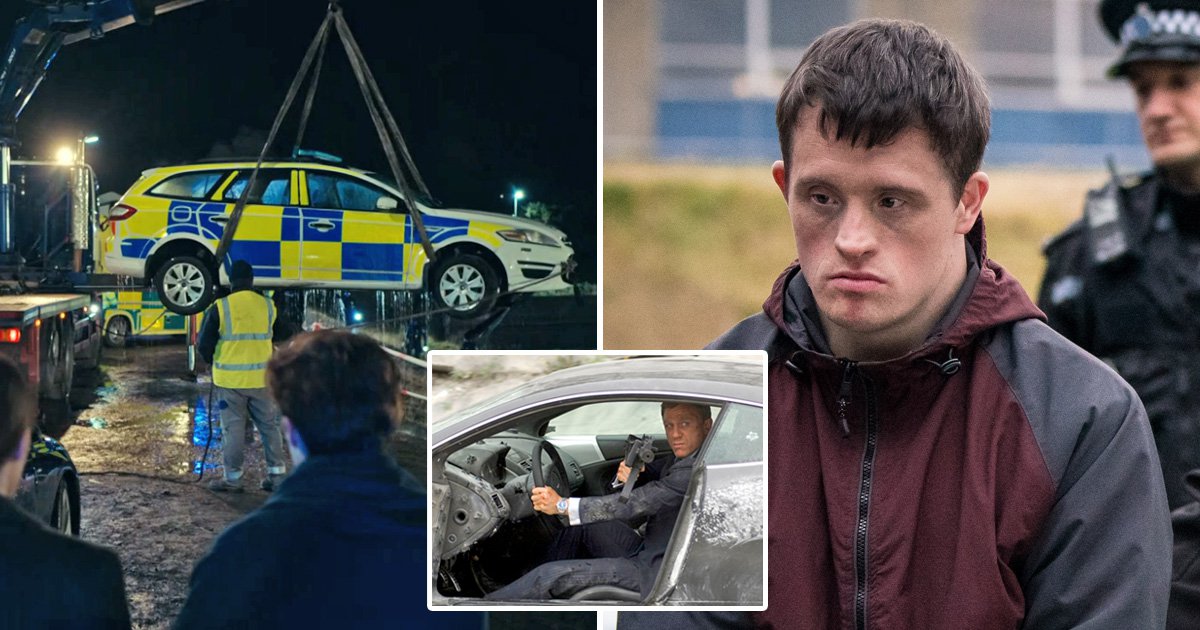 Line of Duty’s Tommy said car lake scene was like being in a James Bond film (Picture: BBC/Sony)Line of Duty star Tommy Jessop has recalled what it was like filming the dramatic car lake scene in freezing cold water, saying that it was like ‘being on a James Bond set’.
In episode three of series six of the BBC crime drama, Terry Boyle (Tommy) is brought into the police station for further questioning regarding the murder of journalist Gail Vella (Andi Osho).
After Terry leaves the building, PC Ryan Pilkington (Gregory Piper) joins him and PC Lisa Patel (Tara Divina) on his journey home, with Ryan then driving the vehicle into a lake and drowning Lisa.
Before Ryan manages to do the same to Terry, former AC-12 staff member DI Kate Fleming (Vicky McClure) thwarts his plan, in scenes that Tommy recalled as ‘wicked’.
During a recent interview, Tommy, 36, spoke about what the conditions were like during filming, which he compared to being in icy Antarctica.
‘Being on Line Of Duty was like being on a James Bond set. It was wicked being in the dramatic scenes like the car chase and the lake,’ the actor told The Sun.

A scene worthy of a James Bond action sequence (Picture: MGM/Eon/Danjaq/UPI/Kobal/REX)‘I did have a stunt double in the water too but yes, it was cold in that lake, it was like being in Antarctica.’
Tommy explained that they had ‘had foot warmers and hand warmers’, adding that he ‘had two or three hot water bottles to warm up with and later a big mug of hot chocolate’.

Ryan tried to kill Terry… but didn’t succeed (Picture: BBC/World Productions/Steffan Hill)Despite bent copper Ryan’s horrific treatment of Terry, Tommy doesn’t have any hard feelings for Gregory, describing him as a ‘great guy’.
Ahead of the next episode of Line of Duty on Sunday, where viewers will find out what happened after shots were fired during Ryan and Kate’s stand-off, Steve Arnott actor Martin Compston shared a picture on social media with his co-star Owen Teale.
In the photograph, Martin and Owen can be seen standing on a golf green… with ‘no caddy’ in sight.
More: BBC

‘Amazing to get out on a course on day off with the big fella, no caddy’s of course with Covid…(sic)’ Martin wrote.
In a reference that will have delighted diehard Line of Duty fans, the ‘caddy’ was in relation to bent copper Dot Cottan (Craig Parkinson), who was in cahoots with the Organised Crime Unit (OCG).
Line of Duty returns on Sunday at 9pm on BBC One.
Got a story?
If you’ve got a celebrity story, video or pictures get in touch with the Metro.co.uk entertainment team by emailing us celebtips@metro.co.uk, calling 020 3615 2145 or by visiting our Submit Stuff page – we’d love to hear from you.

MORE : Gogglebox stars screaming as Line of Duty’s Ryan Pilkington and Kate Fleming pull guns on each other: ‘Shoot the b*****d!’