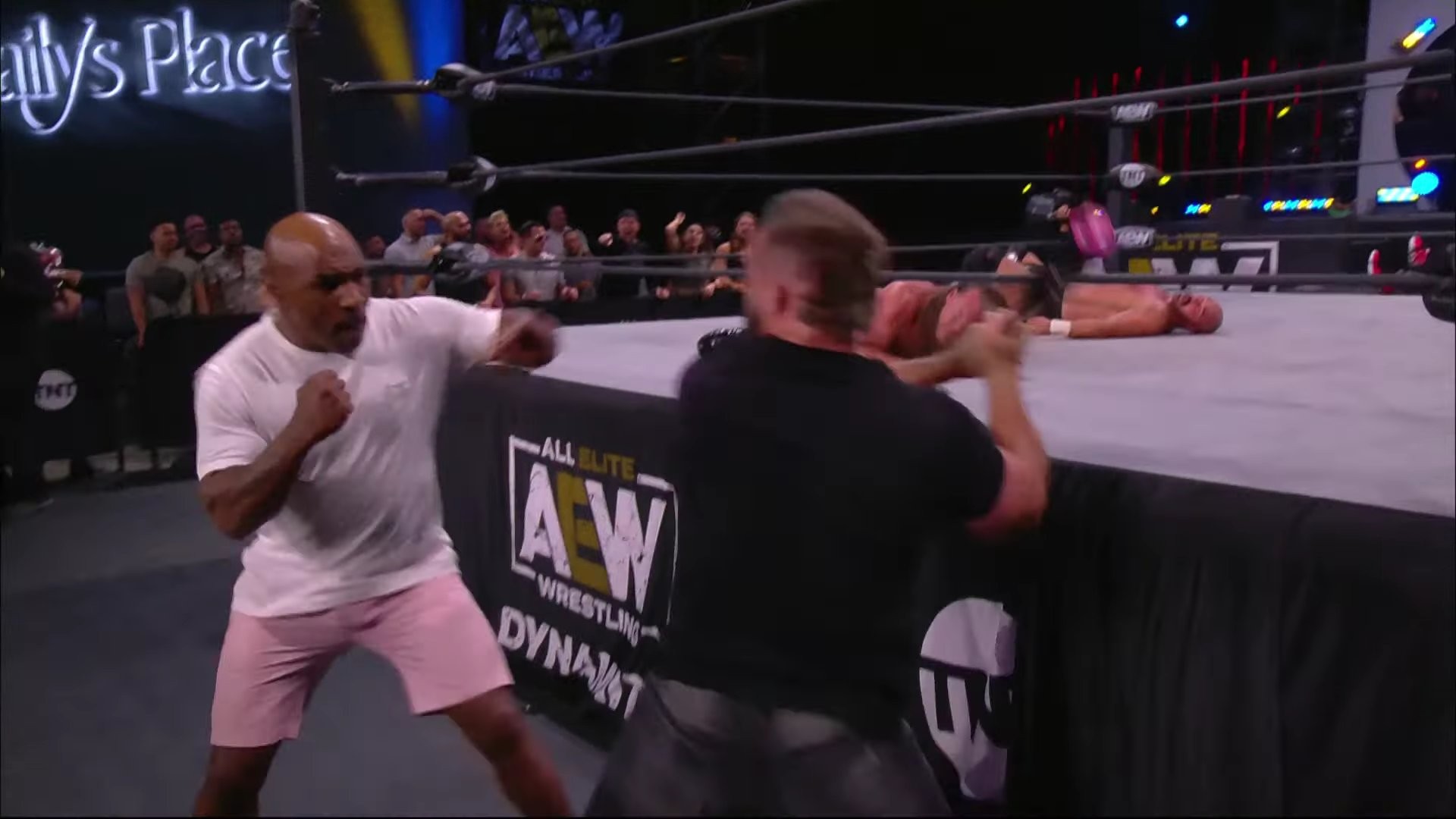 AEW star Cash Wheeler admits he’ll never live down getting ‘laid out’ by Mike Tyson.
The 33-year-old wrestler – along with FTR teammate Dax Harwood and their Pinnacle friends Wardlow, Shawn Spears and MJF – was in a scrap with the boxing legend after he joined up with their Blood and Guts opponents in the Inner Circle.
Opening up on working with Tyson, Cash exclusively told Metro.co.uk: ‘I would use the term “work” loosely. But it was cool. It is what it is, I got laid out. My hands were full at the time, I couldn’t defend myself – whatever, besides the point.
‘I watched Mike Tyson knock out countless men when I was a kid growing up, and I’ve seen him on cartoons, in movies, this and that. This was my first time getting to actually interact with him.
‘And for as long as I’m gonna be alive, I’m gonna be see that gif tweeted to me probably at least once a day. So, that’s kinda cool. I’ll always have that memory of just me getting clobbered.’
Dax also relished the experience, and loved being part of such a high profile segment on Dynamite.

Dax Hardwood and Cash Wheeler (with Tully Blanchard) are ready for Blood and Guts (Photo: AEW)‘We had the opportunity to work with one of the top five sports figures in history. It was a cool moment for us to be able to do that in a featured spot,’ he said. ‘Also, that segment peaked at 1.4 or 5 million which I think – and I could be wrong – is AEW’s highest rated segment in its history.
‘We’re very proud of that, to be included in that. More than anything, hopefully The Pinnacle continues to grow. We can do bigger and better things.’
The former tag team champions – who have held gold in both AEW and WWE – are similarly excited about tonight’s Blood and Guts match, which could be career defining.

Cash knows he’ll never get to forget this punch (Photo: AEW Dynamite)‘That’s definitely something to be proud of and hang your hat on,’ he admitted. ‘We just talked about the Mike Tyson thing – getting trusted with that kind of task, to have someone of that monumental celebrity status, to be in our segment.
‘Now we get to main event with Dynamite with probably the biggest match, the biggest segment in Dynamite history – Blood and Guts.’
The match itself is AEW’s take on the Crockett-era WarGames match – with a roofed cage surrounding two rings – and it’s no surprised FTR are honoured to step into an environment so deep-rooted in wrestling history.
‘As shocking as it might be, we’re obviously a fan of old school wrestling and traditional storytelling,’ Cash quipped.
More: WWE

‘We’ve always looked up to guys like Arn and Tully and the Horseman, all these groups that came before us, but we wanna do our thing also.
‘So it’s cool that we get to follow in their footsteps in a traditional sense, in terms of getting to be in our own version of WarGames with Blood and Guts.
‘But also, to have our own moment in time now, our own piece of history that we get to add to our legacy and leave behind – that’s huge for us.’
Got a story?
If you’ve got a celebrity story, video or pictures get in touch with the Metro.co.uk entertainment team by emailing us celebtips@metro.co.uk, calling 020 3615 2145 or by visiting our Submit Stuff page – we’d love to hear from you.

MORE : AEW’s Cash Wheeler reveals how wrestling saved his life as FTR open up on emotional meaning behind Blood and Guts