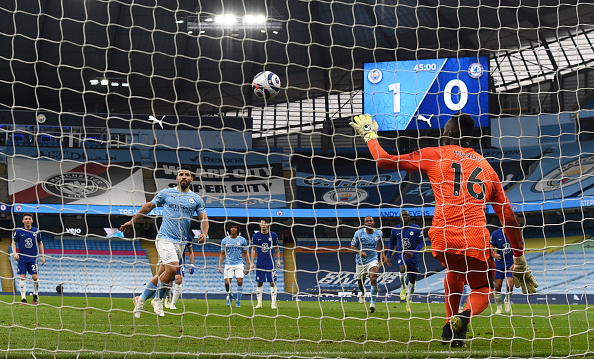 Sergio Aguero missed a penalty in Man City’s 2-1 defeat against Chelsea (Picture: Getty)Sergio Aguero issued a heartfelt apology to his Manchester City teammates and fans after his costly penalty miss in Saturday’s 2-1 defeat against Chelsea.
Pep Guardiola’s side appeared to be on course to be crowned Premier League champions for a fifth time in 10 years when Raheem Sterling opened the scoring on the brink of half-time.
Aguero was afforded the chance to potentially put the game beyond Chelsea minutes later when Gabriel Jesus was adjudged to have been fouled by Billy Gilmour, but the Argentine’s attempted Panenka was comfortably saved by Edouard Mendy.
Chelsea rallied after the break and levelled the contest through Hakim Ziyech, before Marcos Alonso sealed a sensational comeback victory in injury-time, albeit with a slightly fortuitous finish.
Aguero’s miss means the champagne will have to be put on ice for the time being and the club’s record goalscorer accepted full responsibility for a costly error of judgement.

Edouard Mendy easily saved Sergio Aguero’s penalty in Chelsea’s win over Man City (Picture: Getty)He wrote on Twitter: ‘I would like to apologise to my teammates, staff and supporters for missing the penalty. It was a bad decision and I take full responsibility.’
Pep Guardiola, meanwhile, refused to blame his most experienced striker, saying: ‘It’s his decision. The taker makes his decision. He decided to take it his way, I’ve nothing to add.
More: Sergio Aguero

‘It was a tight game, but in general we played really good. We miss our chance in last minute of first half with the penalty.’
They are a top side and we were playing better. We were in a good position but in the end they score.’

See also  'I Thought I Was Dying'

Facebook
Twitter
Pinterest
WhatsApp
Previous articleAnime Coming to Netflix in May 2021!
Next articleJordyn Woods Shows Off Her Generous Curves In This Pink Skin-Tight Dress – Check Out Her Handbag Tour As Well!