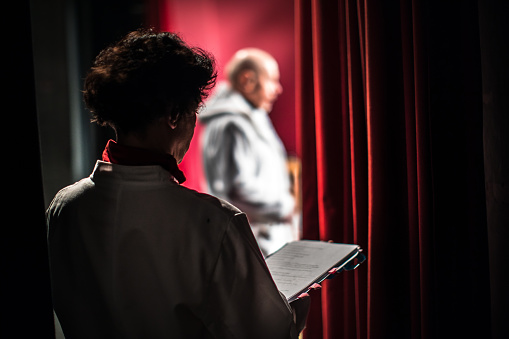 The assumption that audiences are desperate to see everything, shouldn’t lead to the presumption that they will see anything (Picture: Getty Images/iStockphoto)It’s been 422 days since UK theatres were closed in the wake of the coronavirus pandemic.
Fourteen months in which stage actors, comedians, musicians, stage crews, technicians and front of house staff have been out of regular work.
While theatres went dark, actors and activists took time to shine a light on several issues that have pervaded the entertainment industry for decades: lack of diversity and representation, racism, sexism and the abuse of power.
While many hoped that directors and producers had turned these lessons taught into lessons learned, there were some announcements this week that led me to believe they were lessons ignored.
The Old Vic theatre released details of their Back Together season, which at first glance seemed altogether exciting. A mix of diverse voices, classic tales, new commissions and a host of female directors.
Then my heart sank when I spotted that their production of Into the Woods was to be directed by Monty Python member, Terry Gilliam.
Gilliam sparked outrage early last year when he repeated his claim that he was a ‘black lesbian in transition’ while stating he was ‘tired, as a white male, of being blamed for everything that is wrong with the world’.
He called the #MeToo movement a ‘witch-hunt’, referred to Harvey Weinstein’s alleged victims as ‘ambitious people’ who ‘make choices’, then went on to say that ‘Harvey opened the door for a few people, a night with Harvey – that’s the price you pay’.
Considering the theatre’s connection to Kevin Spacey, who was artistic director of The Old Vic from 2004 to 2015, you’d think that the theatre would want to separate themselves from this kind of regressive ideology that prevents actors, creatives and crew from feeling safe and comfortable in a working environment.
The Old Vic received 20 personal testimonies of alleged inappropriate behaviour by Spacey during his tenure at the theatre. Their official statement on the matter included a vow to ‘evolve an intelligent new standard of protection and support in and around the workplace’ while committing to a ‘new way forward’.
Quite how hiring a man with Gilliam’s opinions achieves an intelligent standard of support I do not know.
After a traumatic year in which actors have lost out on so much work, the last thing they need is to be thrust into an environment where they feel unable to speak out if issues arise.
The season looks great. But Gilliam’s appointment – without a public apology for his words or acknowledgement of how damaging they were – makes any progress feel disingenuous, and compounds the notion that rich, powerful, famous men can get away with saying whatever they like without consequence.
For many performers, one silver lining of the lockdown period was the break from the relentless hustle
With 14 months of social distancing measures under our belt, the nation is aching to witness live entertainment more than ever. However, the assumption that audiences are desperate to see everything, shouldn’t lead to the presumption that they will see anything.
After a year-long hiatus, the reopening of theatres feels like a unique opportunity to not only reinvent our relationship with live performance, but to right the wrongs of years gone by and turn over a new leaf. Yet several casting announcements for upcoming shows leave much to be desired.
This week, it was announced that a cisgender man would be playing the transgender role of Bernadette in the UK tour of Priscilla, Queen of the Desert.
An open letter, written last year by transgender and non-binary theatre-makers, called on the musical theatre industry to work towards better representation for transgender actors. Yet one year on, and cisgender men continue to be cast in trans roles.
A second open letter was penned in response to the recent casting announcement, stating: ‘After so much hopeful talk in the last year of creating a better and more welcoming industry upon its return, it’s frustrating that for the trans community this simply isn’t true… we are tired of the promises to learn and change when clearly that isn’t the intention of some producers and creative teams.’
We’ve heard much talk about the ‘new normal’ from politicians, scientists and theatre-makers alike, but when spoken from the mouths of the latter, we hoped that their version of normal would not only be new, but improved.
As the industry prepares itself for opening night, I’m acutely aware that there will be many actors out there for whom the safety curtain is yet to rise and for whom the phone has not yet rung. Actors who have had to fall back on secondary jobs and skill sets in order to make ends meet, with the promise that it would only be temporary.
Witnessing casting announcements and excited tweets from peers about their various self-tapes and auditions may not correspond with the personal experience of many actors. Because performing plays a leading role, not only in their finances, but in their identity, this prolonged resting period will have taken a toll on the mental health of actors, comedians and musicians alike.
For many performers, one silver lining of the lockdown period was the break from the relentless hustle. Several actor friends of mine commented that it was the first time in years they didn’t feel a sense of guilt or shame about not working, because there was no work to be had.
But comfort doesn’t put food on the table. Now that theatres are reopening, albeit in a limited capacity, the hunger to perform has returned.
More: UK

This eagerness to get back to work mustn’t be exploited by those in power. It should not be an opportunity to disregard promises made to do better or learn from the mistakes of the past.
Just because performers have taken a beating since the pandemic began, doesn’t mean they won’t fight for the right to a safe, progressive, inclusive and supportive workplace.
One would hope that after years of lessons on transgressions, the theatre industry would return from its gap year with a long-overdue maturity, but something tells me there’ll be another revival of its most reviled performance to date; the critically disclaimed, Mea Culpa.
Do you have a story you’d like to share? Get in touch by emailing jess.austin@metro.co.uk.
Share your views in the comments below.

MORE : Vaccine passport trials ‘to start next month’ in theatres and stadiums

MORE : Amanda Holden and Sheridan Smith reunite for live theatre performance of I Know Him So Well

MORE : How to watch theatre shows online in lockdown: From Hamilton to Cats

Facebook
Twitter
Pinterest
WhatsApp
Previous articleAnother ‘‘Dragon Ball Super’ Film Set to be Delivered in 2022!!! Check out the latest details!!!
Next articleThe Rock’s Jungle Cruise to Debut on Disney+ Premier Access and in Theaters This Summer