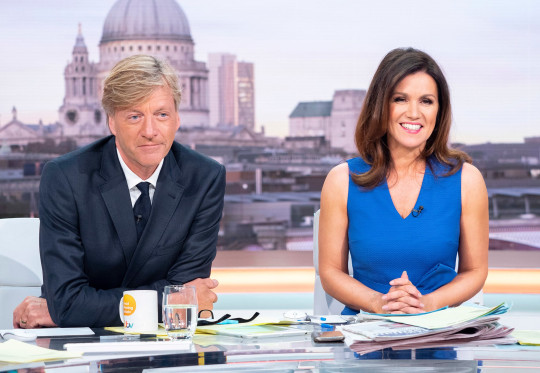 Richard is loved by Good Morning Britain viewers (Picture: ITV/REX)It’s long been rumoured that Richard Madeley is set to be Piers Morgan’s replacement on Good Morning Britain and now he’s claimed that he’d ‘suit’ the job.
The former This Morning host, 64, is joining the ITV show for the month of June as the latest star to fill in Piers’ seat following his quick departure.
Piers left the series over an argument about Meghan Markle in March, refusing to apologise for his comments surrounding the Duchess’s interview with Oprah Winfrey where he dismissed her difficulty with mental health.
It’s been claimed that show bosses are keen on Richard, who has previously filled in for Piers and has proven a hit with viewers.
Speaking to The Sun, Richard said that he thinks he would ‘suit’ the role but is unsure if he will take over permanently, despite being named as one of the front-runners for the position.
‘It’s a good show to do. It suits me and, yeah, I think I suit it. Whether I’m going to be asked to take over, I have no idea. I have had no approach at any level formally or informally. The phone hasn’t rung, I haven’t had a ping into my inbox,’ he told the publication.

Piers Morgan quit his Good Morning Britain role back in March (Picture: ITV/Shutterstock)‘The bookies have me down as the front-runner and there have been opinion polls where I’ve come out reasonably well, but there’s a huge difference between that and it being a reality.
‘I’ll go in, I’ll fill in, I’ll enjoy it and I hope they ask me back. But in terms of sitting in for Piers, it’s a completely open question.’
Richard spoke about his potential new job to Metro’s Sixty Seconds in April, saying: ‘If the phone went and they said, “Would you come in and talk?” of course I would talk to them.
‘It would be bonkers not to. But I very much like sitting in for people. I have all the fun and very little of the responsibility or flak.’
The star previously hosted This Morning alongside wife Judy Finnigan, becoming household names thanks to their time on the show from 1998 to 2001.
Good Morning Britain airs weekdays from 6am on ITV.
Got a story?
If you’ve got a celebrity story, video or pictures get in touch with the Metro.co.uk entertainment team by emailing us celebtips@metro.co.uk, calling 020 3615 2145 or by visiting our Submit Stuff page we’d love to hear from you.