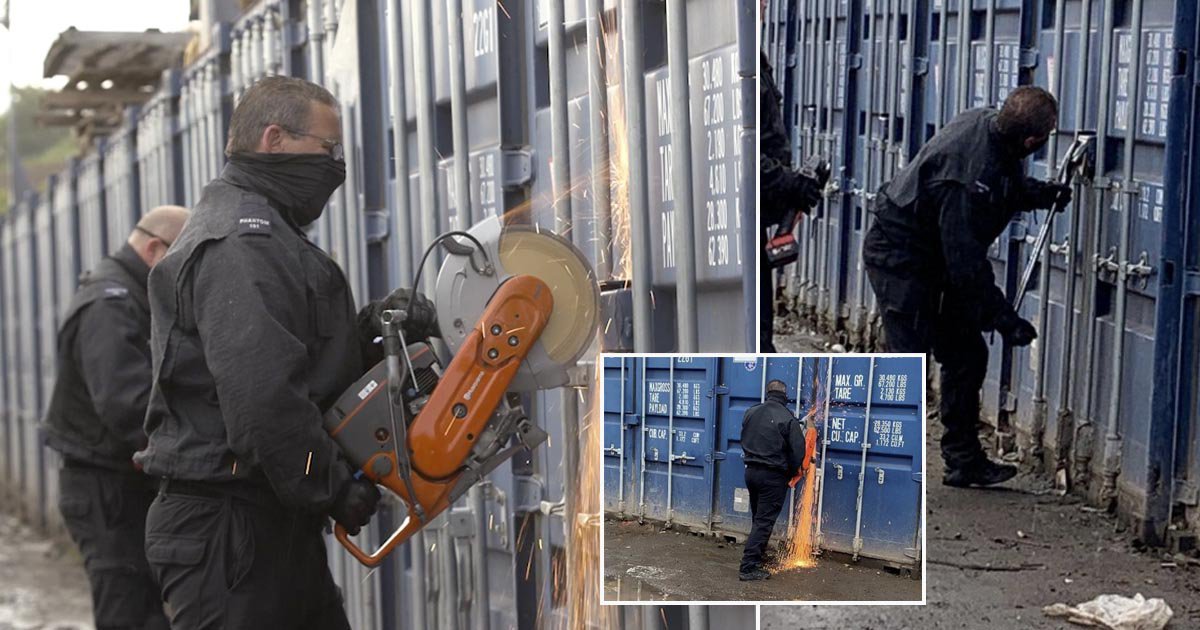 Police sawed open more than 200 shipping containers and found drugs, guns, cash and stolen vehicles (Picture: PA)Drugs, guns, cash and three stolen vehicles have been found in a dawn raid on a large shipping container yard.
A man was arrested at the scene in Essex over possession of a firearm.
Three more people were detained in two East London homes on suspicion of crimes including possession of Class A and B drugs and a firearm.
The raids were carried out yesterday in a crackdown on County Lines drug dealing in which children are often exploited and drawn into serious crime.
The Metropolitan Police said it worked with British Transport and Essex Police for three months to coordinate the ‘disruption of a suspected organised crime network operating in London and Lincolnshire’.
More than 200 containers at the commercial yard in Purfleet, Essex, were opened and searched in the operation.
Officers recovered three stolen off-road vehicles, multiple illegal substances, cash and guns.
Detective sergeant Owen Morgan said ‘disrupting the supply of drugs continues to form a central part of our work to tackle violence on the streets’.

Officer using a saw to break into one of the containers at the yard in Purfleet, Essex (Picture: PA)‘This operation will not only disrupt criminals using lock-up facilities to store their criminal property, but will also supply a wealth of information that, following this operation, will be fully investigated,’ he said.
‘Along with our partner agencies, we are working hard to safeguard children and vulnerable adults by targeting those at the top of the network, the individuals who don’t risk handling the drugs themselves, but coordinate the distribution through the exploitation of others.
‘The sale of drugs can be devastating to the quality of life for communities, not least to the families of vulnerable youngsters who are recruited by criminals to supply the product face to face with users, often in other parts of the country without their family’s knowledge.
‘To the general public, county lines if often seen as nothing more than drug dealing, but in reality it is so much more. It causes harm to generations of young people and their families and has a negative impact on the quality of life for those living alongside it.
More: London

‘Initially, the recruits are tempted into crime by the promise of cash rewards and they often believe that their involvement with a successful drug supplier will increase their own social status.
‘They couldn’t be more wrong. Once involved, they are often threatened with violence and can find themselves unable to escape the network without help.’
If you have information about drug crime call the police on 101 or Crimestoppers anonymously on 0800 555 111.

MORE : More children ‘being groomed into gangs because of the pandemic’